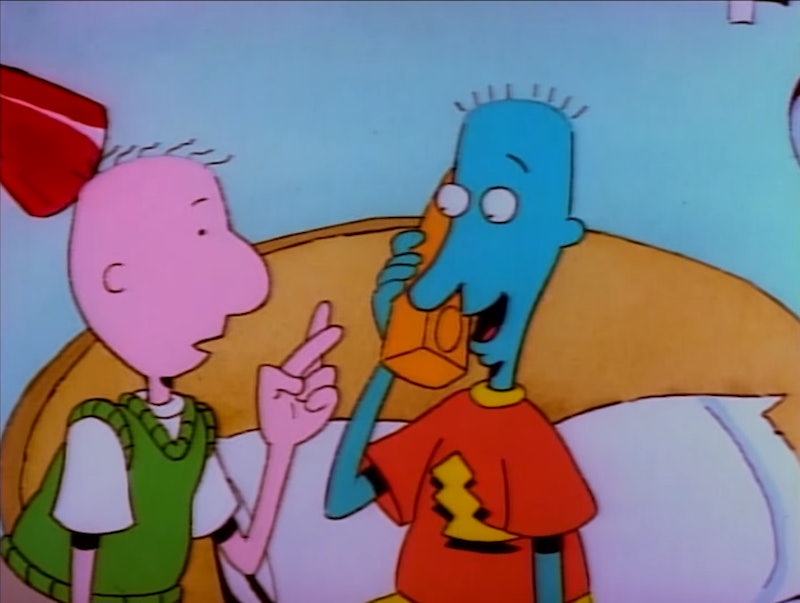 Every generation has its share of awesome cartoons, but the '90s cartoons are just a bit better than all the rest. The decade brought an explosion of creativity in the field of animation, and as a result, the ‘90s cartoons that have stood the test of time. The cartoons you watched as a kid not only hold up today, but in some cases they're even better as seen through your adult eyes. Don't believe me? Luckily, shows like Rugrats, Hey Arnold, and Doug are available online for you to revisit at your leisure. And if you need a refresher, here are the best cartoons from the ‘90s.

The Simpsons in the '90s was smart, culturally savvy, and unbelievably entertaining. At its height, no show — animated or not — could touch The Simpsons' greatness. From the cleverness of "Marge vs. the Monorail" to everything Lisa Simpson ever said, '90s era The Simpsons was fearless and landscape changing television.

A cartoon about how babies see the world provided some of TV's most relevant commentary on day to day life. In the background of the babies' lives, Phil and Lil's mom was being casually feminist AF, Stu was warning the next generation about the dark side of adulthood, and Grandpa was renting some seriously unexpected videos. Rugrats was a show with layers, and that's why it still holds up when you rewatch it as an adult.

The serialized storytelling, the gorgeous animation, and the nods to Beauty and the Beast made Gargoyles an epic cartoon that primed a generation for amazing shows like Game of Thrones and Outlander.

Eccentric and far funnier than it had to be, The Tick chronicled the adventures of a slightly unhinged superhero and his hesitant sidekick with an unparalleled amount of wit and style.

Doug's original run brought an honest depiction of the hopes and anxieties of a sweet preteen boy to life and made a generation of young kids feel less alone.

Before Christopher Nolan's franchise, the best adapted version of Batman's adventures was hands down the '90s animated series. It is a dark, beautifully animated look at Gotham that never tried to dumb down Bruce Wayne's double life just because his story was airing Saturday mornings.

Somehow, a scientist using a recipe to create three perfect little girls resulting in pint-sized heroes turned out to be one of the most feminist and addictive cartoons of the era.

You most likely had to have parental supervision to watch King of the Hill, but the show's depiction of small town life was so accurate and warm, it was worth sitting through the "adult" moments with mom and dad in the room.

If there was an award for cartoon most likely to unexpectedly punch you in the feelings, Hey Arnold! would win it every single year.

PBS produced a modern classic with Arthur. The show covertly teaches kids about cooperation, the value of friendship, and diversity, while also being a funny, thoughtful story about growing up.

A cartoon about a diabolical mouse and his hapless sidekick turned out to be one of the most dementedly hilarious shows of all time.

Class hierarchies received a thorough examination in the bright Recess, which revealed the inner workings of the complex social system that rules playgrounds everywhere.

Rocko's life was bleak, often way too real, and always, always entertaining to watch — maybe even more so now than when you were a kid.

Eliza's adventures in the wild were full of teachable moments about respecting nature, but more importantly they were fun and they gave '90s kids a smart heroine to admire.

Sailor Moon may very well be the world's most recognizable anime, and that's because it is eternally awesome.

It is hard to imagine a cartoon ever topping Animaniacs in the meta department. This show is why you are so pop culturally savvy today.

Weird, occasionally gross, and just this side of spooky, Aaahh!!! Real Monsters created a fully realized world where nothing was more important than scares. The end result was a ghoulish cartoon that was easy to become obsessed with.

More like this
A New 'And Just Like That' Table Read Pic Confirms A Key Character's Return
By Jack Irvin and Grace Wehniainen
Netflix Reveals First Look At Wednesday In The 'Addams Family' Spinoff Series
By Bustle Editors
Kenan & Kel Just Reunited At The 2022 Emmys & Twitter Is Overjoyed
By Grace Wehniainen
Nicola Coughlan Shared A Lady Whistledown Excerpt From ‘Bridgerton’ Season 3
By Grace Wehniainen, Alyssa Lapid and Sam Ramsden
Get Even More From Bustle — Sign Up For The Newsletter

This article was originally published on July 30, 2016