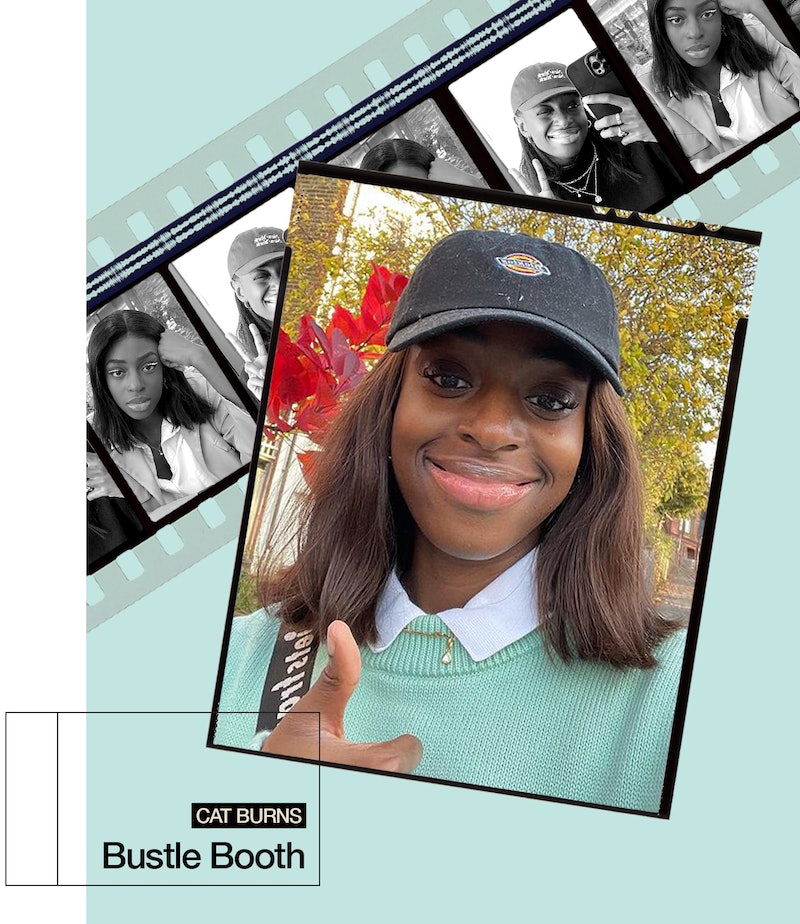 Cat Burns’ frank, intimate lyrics read like the long texts you draft in your notes before hitting send. Each line is deeply personal – almost as if you’re peeking over Burns’ shoulder while she types on the bus.

“This has been going on for too long,” she sings in “It’s Over”. “Don't know how else to say this all, but you, you ain't the one. And it's not fair on the both of us and deep, deep down I know you know that it's over.”

This confessional style is an entirely conscious decision on Burns’ part. “I’ve always loved artists who write songs about specific things [in their lives],” she tells me from the back of a car, travelling to the studio. “Because I’m like, ‘Oh my god, they’ve written this song for me.’ Like I have an even closer relationship with the artist now. I wanted to make sure I did that for my listeners.”

Whether it’s calling out toxic men in “Fuckboy” or describing the hole left by an absent parent in “I Don’t Blame You”, Burns’ back catalogue runs the gamut of formative experiences. “Free” – one of the 23-year-old singer’s most confessional songs to date – has made waves online, with the LGBTQIA+ community rallying around this raw but joyful coming out track.

“Free” was originally written for Burns’ mother, who struggled with her daughter’s sexuality for a time. “The first demo we had of it was just me on the piano. When I played it to my mum, she said ‘Oh my gosh, I didn’t know this is how you felt. This is so beautiful.” In the years since, Burns has received countless DMs from fans who’ve described how the song helped them with their own coming out. “When I told my mum about that, she was like, ‘Wow, this is really powerful. This is bigger than you and me now.”

However, it’s “Go” (written on behalf of a heartbroken friend) that really put Burns on the musical map. In early April, “Go” reached sixth place in the UK Official Charts and more than 30 million streams on Spotify. This “little song,” as Burns describes it, experienced the fairytale Gen Z success story. Written in 2018, it flew under the radar for a couple of years while Burns performed it as a busker on the Southbank. However, after Burns posted a verse or two on TikTok in 2020, things went from zero to viral in a matter of months. “I think a group of 15 year olds just found the sound and started using it,” she says. Now you can find “Go” (along with its “Lower and Slower” remix) being used as the backing track for relationship tutorials, renovation videos and people just straight up crying to camera listening to the lyrics (I mean, who can blame them?).

Even with TikTok fame and chart success under her belt, Burns has so much to look forward to. Having just performed two sold-out shows at London’s Omeara, she’ll be the supporting act for Years and Years’ 2022 UK tour next, and her EP Emotionally Unavailable has just dropped.

Get to know more about Burns in her Bustle Booth before she takes over your Spotify suggested list.

A latte with oat milk.

“Oh, you wanna talk about moooottttheeeers!!” from White Chicks.

What was your fave cartoon as a kid?

The Proud Family on Disney.

There's a show on Netflix called Lock & Key that I really like.

You know, I really don’t have one.

Damn, I'm not a fan of karaoke. I find it very awkward. I think it's a really awkward thing, especially when you sing for a living.

What's something that's inspiring you lately?

All the new music from other artists. There's been some people online doing pop songs but written in really cool ways. And it's been inspiring me to look at how I'm writing and take a leaf out of their book. Like, there's one girl called Maddie Zahm. She's got a song out right now called “Fat Funny Friend”. And it's such a beautifully written song. It's basically like a ballad. The way she pulls the whole song together is just beautiful. I just keep listening to it on repeat. I'd love to work with her one day.