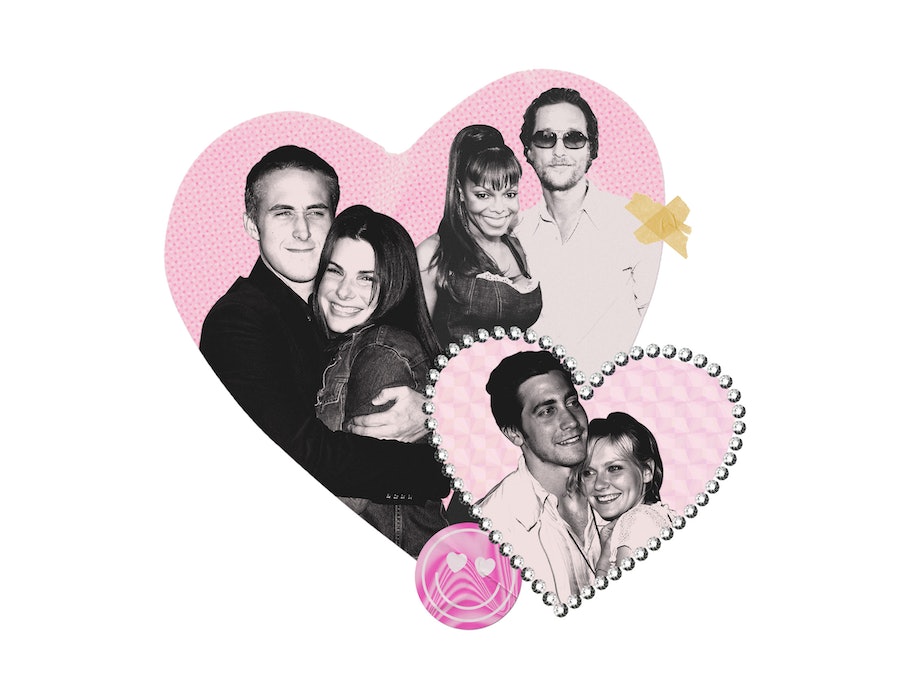 Ah, 2002: the year when you’d get home from school to watch SpongeBob SquarePants, log onto AIM to see if your secret crush was online, and check your favorite stars’ relationship status on AOL.com. Most people also remember the era for Britney Spears and Justin Timberlake, Jessica Simpson and Nick Lachey, and the grand debut of Bennifer. But many other breakout stars from the 2000s were also in relationships that year, and had some of those forgotten pairings happened today, they’d surely light up social media similar to modern couples.

For example, Nicole Kidman was engaged to a musician who wasn’t her current husband, Keith Urban, and Chris Evans actually had a long-term relationship with another A-lister before becoming a Marvel superhero. Penelope Cruz almost had a similar last name, thanks to a certain Top Gun actor, and teen queen Hilary Duff dated two of her fellow Disney Channel stars.

These 20 celebrity couples may not have defined 2002 for all of us, but their oft-forgotten romances played a key part in making tabloid and social media culture what it is today.

Before Evans became Captain America and Biel married Justin Timberlake, the two dated for nearly five years, from 2001 to 2005. The couple went on to star in two films together, Cellular and London, and came very close to taking the next step in their relationship. “We both want to be married, and we both want to have children,” Biel told Cosmopolitan in 2005. “But we’re not engaged, so the rumors are false ... so far.” The couple split later that year.

Bullock and Gosling started dating in 2002 after meeting on the set of their film Murder by Numbers, when she was 37 and he was 22. At the time, they kept their romance hush-hush and denied tabloid rumors, with Bullock even saying they were just “friends” and co-stars. The couple reportedly split two years later, and their relationship was only confirmed in 2011 when Gosling called Bullock one of his two “greatest girlfriends of all time” in an interview with The Times — the other being ex Rachel McAdams, his co-star from The Notebook.

Dunst and Gyllenhaal started dating in 2002 after they met through his sister, Maggie Gyllenhaal, with whom Dunst starred in Mona Lisa Smile, and they remained a young Hollywood power couple for two years. It seems, however, that Dunst knew from the start that the relationship wasn’t meant to lead to marriage. “Oh, I’m too young to get married,” she told People months before they split in July 2004. “Seriously, I’m 22 years old. It’s so annoying that they put pressure on you.” However, the pair brought us that iconic photo of Dunst eating salad with her hands and Gyllenhaal looking put off by her.

This is the kind of celebrity couple pairing that could only happen in the early 2000s, and they delivered. The Sweetest Thing actor and the 30 Seconds to Mars frontman dated for four years starting in 1999. They even were rumored to have gotten engaged at one point, although the couple never commented on the gossip, and they split in 2003.

Before you knew Johansson as an Oscar-nominated movie star and Antonoff as the super-producer for Taylor Swift, Lana Del Rey, Lorde, and more artists, the two were a couple. The actor and Bleachers frontman dated for more than a year from 2001 to 2002, when they were just students at the Professional Children’s School in New York. (They even went to prom together.)

It’s easy to forget that Simpson and Lachey not only dated in 2002 but got married, leading to their infamous MTV reality show Newlyweds: Nick & Jessica and its iconic “Chicken of the Sea” moment. The couple separated in 2005 before officially getting divorced the following year, and it seems there’s no love lost between the two. Simpson opened up about their marriage in her 2020 memoir Open Book, sharing a page from her divorce diary. “So Nick, u r with another already? Seems that you forgot the love you spoke to me,” she wrote at the time. Lachey reportedly has not read the book.

Bridget Jones and a member of The White Stripes might be the most random celebrity couple from 2002, but it happened. Zellweger and White met that year on the set of their film Cold Mountain (White acted as a troubadour in the film and also contributed to the soundtrack). Zellweger won her first Oscar in the Best Supporting Actress category for her performance in 2004, with White by her side on the red carpet. The pair dated for nearly two years before splitting at the end of 2004, with Zellweger’s rep telling People that “they remain good friends.”

Yes, some of Morissette’s heartbreak anthems you sang in your mirror with a hairbrush were likely about Reynolds — but not “You Oughta Know,” obviously. The actor and the singer-songwriter met at Drew Barrymore’s birthday party in 2002 and immediately hit it off, even getting engaged in 2004. However, after a three-year engagement, the couple called it quits in 2007, a period that Morissette later described as “rock bottom” to the Los Angeles Times. “Public romance? I’m going to be avoiding that in the future,” she told Entertainment Weekly in 2008.

Kidman has a thing for musicians. Before marrying Keith Urban, she dated Lenny Kravitz in 2002, when he was apparently her landlord, according to People. The pair reportedly split a year later, but it took more than a decade for fans to discover just how serious they were: It wasn’t until 2017 that Kidman revealed she actually had been engaged to the rocker. “Well, I knew Zoë because I was engaged to her father,” she told The Edit while talking about his daughter, Zoë Kravitz, who became Kidman’s Big Little Lies co-star. “It’s all in the family! I love Lenny, he’s a great guy.” The exes remain on good terms, with Kravitz even posing with Kidman and Urban at the CMT Music Awards in 2013.

Kunis and Culkin are proof that young Hollywood love isn’t always fleeting (even if we forget they were even a thing). The That ’70s Show alum and Home Alone star were together for nearly a decade, from 2002 to 2011, and they were as settled as you can be, outside of being married or engaged. It’s unknown why they broke up, but Kunis took responsibility for their “horrible, horrible” split in a 2018 episode of Dax Shepard’s Armchair Expert podcast. “I’ll be the first to admit it: I was an *sshole in my 20s,” she said. “I think it’s f*cked up what I did and it’s f*cked up how I did it.”

The king and queen of early 2000s Disney Channel actually dated — at least for one date. LaBeouf revealed in a 2011 interview with Details that he took out Duff for sushi in 2002 and called it “probably the worst date either of us has ever had” without going into detail. Duff never commented on the report, but it seems Lizzie McGuire and Louis Stevens simply weren’t meant to be.

It’s easy to forget, but Duff, Carter, and Lohan were the love triangle of the century for millennials. After Carter appeared in a 2001 Lizzie McGuire episode, he started dating Duff on and off in real life for the next two years. Carter then got “bored,” as he once told CNBC, and started casually dating Lohan a year into the relationship, setting the scene for a tabloid-fueled feud for the ages. They both dumped him for good in 2003 and finally put their feud to rest in 2007.

Who didn’t Valderrama date in the early 2000s? From 2000 to 2002, the That ’70s Show alum dated Moore after they met at a photo shoot for an unnamed teen magazine when she was 15. The two remain on good terms, but their relationship became strained when Valderrama claimed to Howard Stern in 2006 to have taken Moore’s virginity, which she still adamantly denies. “I love him and I still love him and he’s a very good friend, and that’s why I was so shocked by it, because not only was it a fib, but it was so unlike him,” she told Stern in 2018.

Cruz could have been Penelope Cruz-Cruise. The Vicky Cristina Barcelona star met the Jerry Maguire actor in 2000 on the set of their film Vanilla Sky while he was still married to Nicole Kidman, although they maintained that they didn’t start dating until July 2001, after he and Kidman were divorced. The couple split in early 2004, with Cruz’s rep stating that “they remain good friends,” which proved to be true when the duo was spotted out to dinner with Salma Hayek in 2015. “Tom is a very good man, and I am close to his whole family,” Cruz told The Guardian in 2006. “I love his children, and his mum, and all of his family, and he’s a great man.”

Speaking of Hayek, she also had an unexpected A-list romance. She started dating Edward Norton in 1999 after they were reportedly set up by their chiropractor. The duo quickly became red carpet staples and even co-starred in Hayek’s 2002 Frida Kahlo biopic, although they kept their relationship private otherwise. Even their split was low-key, with Hayek’s then-11-year-old Spy Kids co-star Daryl Sabara spilling the beans by telling The Today Show that she “isn’t with Ed Norton anymore.”

The famous supermodel dated the perennial heartthrob on and off for more than six years from 1999 to 2005. It remains one of DiCaprio’s most serious relationships, with Bündchen being his only partner with the distinction of accompanying him on an Oscars red carpet. In 2019, she revealed in her book Lessons: My Path to a Meaningful Life that she split from DiCaprio after suffering panic attacks and realizing she needed to make changes. “Was I alone in wanting to do some serious soul-searching while he stayed the same?” she wrote. “In the end, unfortunately, the answer was yes.”

Paltrow first met Wilson on the set of their film The Royal Tenenbaums in 2001, and they reportedly dated for more than a year before splitting up. Not a lot is known about their relationship, and they weren’t even seen together all that much aside from some pap shots taken in London. But in June 2021, Paltrow told USA Today that the only movie of hers she can rewatch is The Royal Tenenbaums, so she can’t have too many bad memories from when they filmed together.

Rory Gilmore and Jess Mariano weren’t just a perfect match on screen. Bledel and Ventimiglia reportedly started dating each other in 2001, months after they met on the set of Gilmore Girls. Their relationship would go on to last more than four years, even after their on-screen characters broke up and Ventimiglia left the show. However, the co-stars kept their real-life romance so private that fans didn’t find out about it until reports of their breakup surfaced in 2006.

Is there a celebrity couple that defines the early 2000s quite like Spears and Timberlake (and their matching denim looks)? The pop music power couple hit their peak in 2002 as they supported each other in their new ventures, like Spears’ debut film role in Crossroads and their collaboration “What It’s Like to Be Me” on her third studio album, Britney. The two also split in 2002, marking the demise of perhaps the most influential teen power couple of our generation and leading to years of ensuing controversy.

Quite possibly the greatest celebrity love story of our time. The year 2002 marked when Lopez and Affleck first fell in love, and the public was so enamored by the pair that they inspired the first-ever celebrity couple moniker, Bennifer. Ultimately, it was the same media attention that caused them to call off their planned wedding and go their separate ways in 2004. However, the mega-stars reconciled nearly two decades and several children later, in May 2021. They’re going so strong that they’re reportedly buying a $50 million mansion together and, in April, announced their engagement.