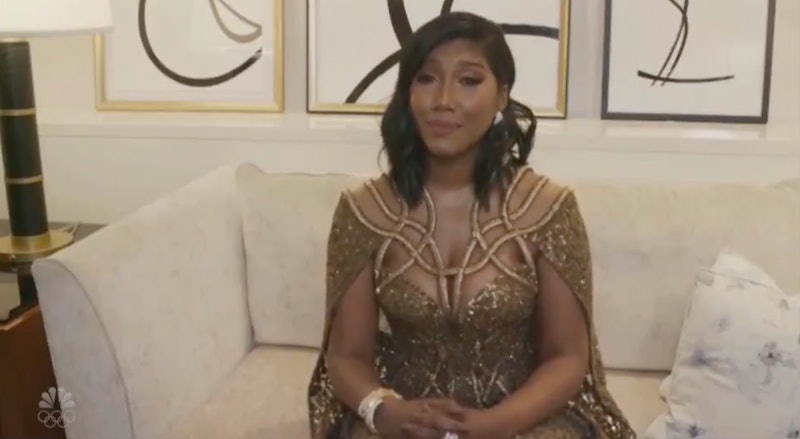 In one of the most emotional moments of the 2021 Golden Globes, Chadwick Boseman won his first Golden Globes award posthumously for his performance in Ma Rainey's Black Bottom. The honor arrives six months after he died at age 43 following a private battle with colon cancer. Boseman's widow Taylor Simone Ledward accepted his award for Best Actor in a Motion Picture - Drama with a moving speech.

Ledward went on to thank various members of the Ma Rainey's Black Bottom cast and crew, including Boseman's co-star Viola Davis, who watched on with tears in her eyes. Boseman's wife went on to admit, "I don't have his words, but we have to take all the moments to celebrate those that we love, so thank you, HFPA, for this opportunity to do exactly that."

Ma Rainey's Black Bottom marks Boseman's last onscreen appearance, a role he filmed while undergoing chemotherapy for stage IV cancer. In an interview with The New York Times, Davis confirmed that none of the film's cast or crew knew about Boseman's prognosis. "I'm looking back at how tired he always seemed," she told The Times. "I look at his beautiful, unbelievable team that was meditating over him and massaging him, and I now realize everything they were trying to infuse in him to keep him going and working at his optimal level. And he received it."

Ledward's moving speech for her late husband captured viewers' hearts, inspiring several tweets that praised her strength. Her remarks also followed a segment in which TikTok star La'Ron Hines interviewed a group of kids about topics related to the Golden Globes. Most of the participants didn't have answers to questions like "How many people were in The Chicago 7?" But each and every child knew who Boseman was and his legacy as T'Challa in Black Panther.

Ledward previously accepted Boseman's Actor Tribute award at the 2021 Gotham Awards last month. "He was the most honest person I'd ever met because he didn't just stop at speaking the truth," she said. "He actively searched for it in himself and those around him and in the moment... If one does not live in truth, then it's impossible to live in line with the divine purpose for your life. And so it became how he lived his life, day in and out. Imperfect but determined. ... He realized that when one is able to recognize that when their strength does not come from themself, they rarely mess up. That's what he was doing when he was acting. [He] was not merely telling a story or reading lines on a page, but modeling a path to true fulfillment."

Boseman is the first actor to posthumously win this Golden Globes category since 1976, when Peter Finch won for Network. He'll have another opportunity to win awards for his final film role when the Screen Actors Guild Awards air on April 4 and, if nominated, at the Oscars on April 25.

More like this
Here’s Everything Coming To & Leaving Netflix In October
By Jake Viswanath
What’s New On Netflix: Ana De Armas’ 'Blonde' & A Nick Kroll Special
By Arya Roshanian
What’s New On Netflix: Meet 'The Real Bling Ring'
By Arya Roshanian
Devi Is Going To Meet A “Smoldering Bad Boy” In ‘Never Have I Ever’ Season 4
By Jack Irvin and Gabrielle Bondi
Get Even More From Bustle — Sign Up For The Newsletter