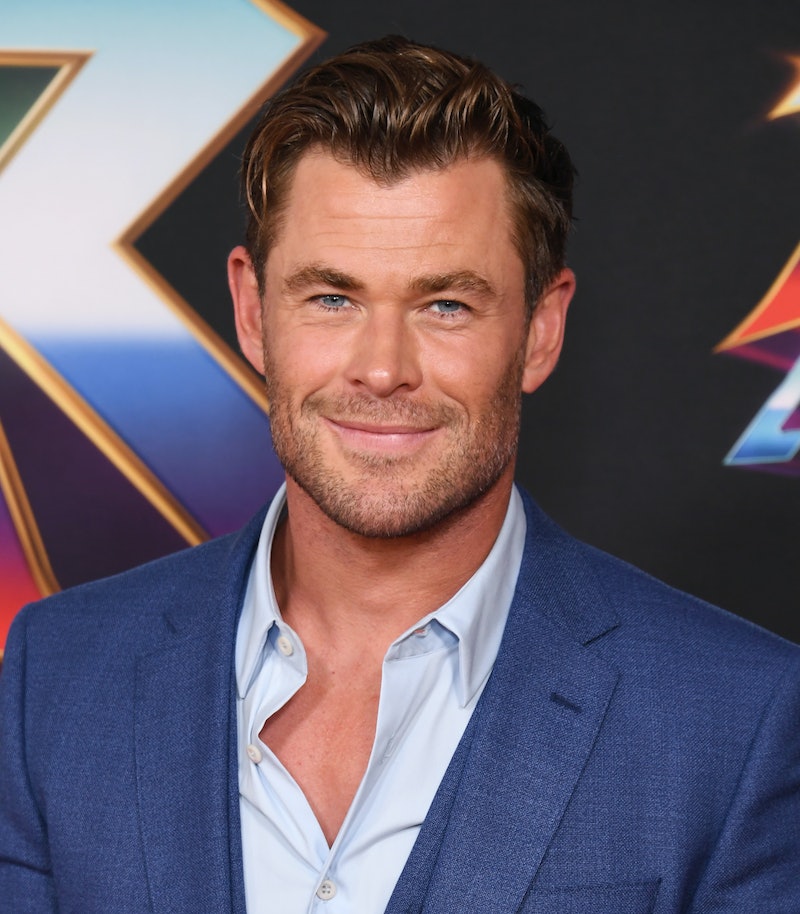 Though Chris Hemsworth’s bare butt is pixelated in the Thor: Love and Thunder trailer, moviegoers will see the uncensored version when the Marvel film premieres on July 8. Naturally, Hemsworth had a cheeky take on his semi-nude scene at the movie’s June 23 Hollywood premiere. “It was 10 years in the making, that scene — kind of a dream of mine,” Hemsworth joked to Variety on the red carpet. “The first time I played Thor I took my shirt off and I thought, ‘You know what’s gonna sweeten this… a decade from now it’s all gonna come off.”

The Australian actor was quick to point out, however, that he already bared his bum “many years ago” as British race-car driver James Hunt in 2013’s Rush. “In a Marvel film, it was a very large screen, it was a very big pair of cheeks,” he quipped, before adding that he “had seen it before.” When asked if he “did a lot of squats” in preparation, Hemsworth replied that he “did a lot of everything.”

Indeed, Thor: Love and Thunder director Taika Waititi told the outlet separately that the scene — in which Thor’s clothing is “flicked” off to reveal his “god bod” in full view of Natalie Portman’s Jane Foster and Tessa Thompson’s Valkyrie, among others — was his way of honoring Hemsworth’s hard work. “We had talked about, ‘Yeah, we gotta show off this body,’” Waititi said. “My whole thing was like, Chris works so hard, you’ve gotta show it off. Don’t cover it up with all these suits and the cape and stuff, it’s not fair!”

Last year, however, Hemsworth shared his belief that his buff physique prevents people from taking him seriously as an actor. “There’s an aesthetic that the role requires,” Hemsworth told The Telegraph in April 2021 of portraying Marvel’s God of Thunder. “Bodybuilding is seen as vanity, whereas if I put on a bunch of unhealthy weight, or got unhealthily skinny for a role, I’d probably be called a serious actor.”

He also called his decade of maintaining a Thor-level fitness regiment a “full-time job” in itself. Add to that a 12-hour shooting day, and Hemsworth said his workload is “a real grind.” Nevertheless, he still finds that grind rewarding, explaining that “you have to look at it like a professional athlete.”

He’s also been self-critical of his work, particularly his performance in Thor: The Dark World. “I was a little disappointed in what I’d done,” he recently admitted to Vanity Fair of the MCU’s second Thor film. “I didn’t think I grew the character in any way, I didn’t think I showed an audience something unexpected and different.”

So he and Waititi “dismantled the character,” making Thor “a little more unpredictable,” while also allowing more of his humor to shine through, ahead of 2017’s Thor: Ragnarok. Now with Love and Thunder on the horizon, going from shirtless to bottomless scenes is hardly the only way his Norse god has evolved.

More like this
Who Is Tatiana Maslany Dating? The 'She-Hulk' Star Is Married To 'A Locke & Key' Actor
By Radhika Menon
Tom Holland Explained His Social Media Break & Shared Mental Health Resources
By Grace Wehniainen
Taylor Swift Wanted To Be In 'Twilight: New Moon,' According To Its Director
By Grace Wehniainen
Jonah Hill Explains How His Anxiety Attacks Will Change The Rest Of His Career
By Grace Wehniainen
Get Even More From Bustle — Sign Up For The Newsletter