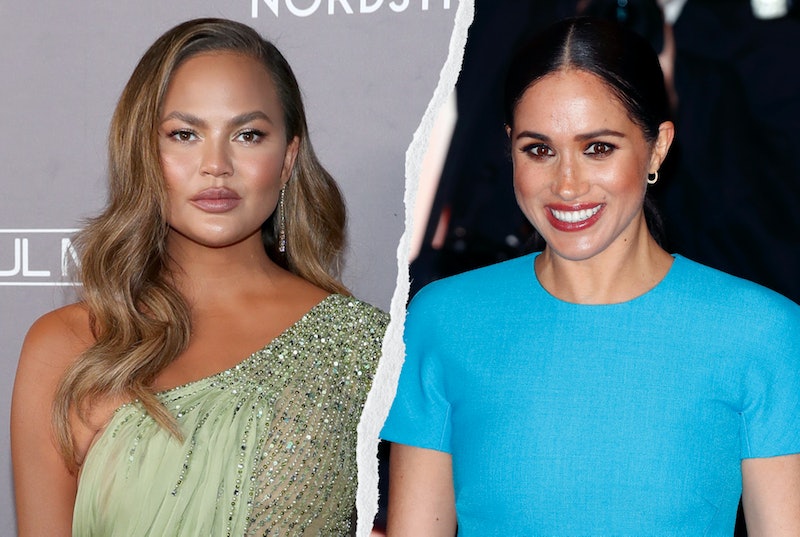 If you've been keeping up with this week's headlines, you know that Meghan Markle has had a rough few days. As curious followers of the royal family not-so-patiently await her and Prince Harry's tell-all interview with Oprah this weekend, articles have been circulating about the accusations that she bullied former palace staff members. Now, Chrissy Teigen is speaking out over the Markle media craze and making it clear that the negative attention feels all too familiar.

"This Meghan Markle sh*t is hitting too close to home for me," Teigen tweeted on March 5. "These people won't stop until she miscarries. F*cking stop it." Of course, the Cravings author was drawing a parallel to the heavy criticism she received after announcing her pregnancy loss in September 2020. "We are shocked and in the kind of deep pain you only hear about, the kind of pain we've never felt before," she wrote at the time alongside a series of photos from the hospital. Unfortunately, many people on social media were not happy that she shared such a private, painful, and unfiltered moment.

"I cannot express how little I care that you hate the photos," she wrote in a personal essay shared on Medium later that month. "How little I care that it's something you wouldn't have done. I lived it, I chose to do it, and more than anything, these photos aren't for anyone but the people who have lived this or are curious enough to wonder what something like this is like." Sadly, Markle is one of the people who knows what it's like to lose a pregnancy. In a November 2020 essay published in The New York Times, she revealed that she miscarried in July.

"I knew, as I clutched my firstborn child, that I was losing my second," Markle wrote, recalling a sharp cramp she felt in her stomach one morning. Much like Teigen, her decision to share her story was met with a lot of online backlash. "Is anyone really questioning the pain and sheer awfulness of suffering a miscarriage, or are they perhaps criticizing Meghan's decision to write a 1,000 word op-Ed about herself?" a Daily Express male journalist tweeted. "What does it add to the resources already available for those who go through a tragedy like this?"

Teigen came to Markle's defense at that time as well, according to Just Jared. "Award for today's absolute piece of sh*t goes to Marco," the Lip Sync Battle host reportedly tweeted. "Congratulations, piece of sh*t."

Moments after sending that reported tweet last year, she deleted the post. "Sorry, forgot I'm trying to be nicer," she tweeted as a follow-up.

More like this
Tyler Perry Makes Rare Comment About Meghan Markle & Prince Harry's Love Life
By Radhika Menon
Why Was Sandra Oh At The Queen's Funeral? She Represented Order Of Canada
By Radhika Menon
Prince George & Sophie Wessex Shared A Tender Moment At The Queen’s Funeral
By Jake Viswanath
8 Photos Of Prince George & Princess Charlotte At Queen Elizabeth II's Funeral
By Jake Viswanath
Get Even More From Bustle — Sign Up For The Newsletter