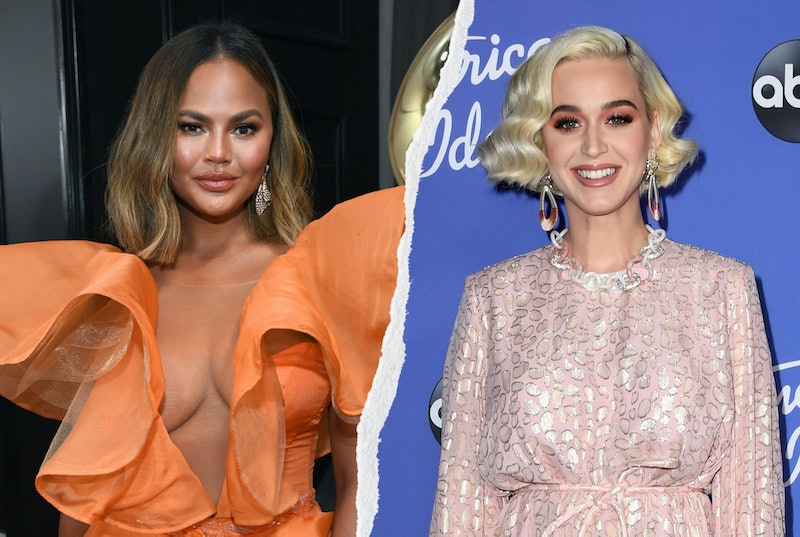 Chrissy Teigen may have leaked confidential details about Joe Biden’s inauguration before it happened, but that’s not the only embarrassing story she has from that fateful day. On Tuesday, March 9, the Cravings author said on The Tonight Show that she had a very awkward encounter with Katy Perry at the event, who performed her hit song “Firework” alongside a stunning fireworks display.

“I remember I was so scared ‘cause we ran into Katy Perry after and I always say dumb things. Like, I always get nervous and I say faux pas,” Teigen told host Jimmy Fallon. “I hadn’t seen Katy for so long and I was like, ‘Oh, I typically hate fireworks,’ but that was amazing.” Unfortunately, the singer may have misheard her. “I think she heard that I said I hate ‘Firework,’ like, the song. And so I wanted to die. I felt so bad.”

In addition to her awkward encounter with Perry, the Lip Sync Battle host opened up about getting scolded for posting videos from husband John Legend’s rehearsal the night before. “Inauguration was freezing and amazing and beautiful and I didn’t know that John’s performance at the Washington Monument was a secret, so I Instagrammed the whole thing, like the day before for rehearsal, and then I got in trouble,” she explained.

At the time, Teigen tried to right her wrong by hopping back on Twitter and asking her followers to “act surprised” by the performance, even though she already revealed the location and what the stage looked like. “I'm done with you lol," Kamala Harris’ niece Meena Harris tweeted in response. “Meena help lmao you gotta TELL me this stuff,” the model wrote back.

Despite some of the more cringe-worthy moments of that day, Teigen did manage to get Biden to follow her on Twitter. "Hello @joebiden I have been blocked by the president for four years can I get a follow plz," she tweeted prior to the swearing-in ceremony, referring to her feud with former President Trump. Her request was quickly fulfilled, making her the only non-White House account followed by @POTUS. The bad news? According to Teigen, a follow from the president isn’t all it’s cracked up to be.

“The second it happened I was like ‘Oh, sh*t,’ and I truly think I sent like two tweets,” the author told Fallon of the whole experience, explaining that being followed by the president on social media was simply too much pressure. “I loved the statement of that, but then it just became too much,” she said. “Yeah, life is better now.”