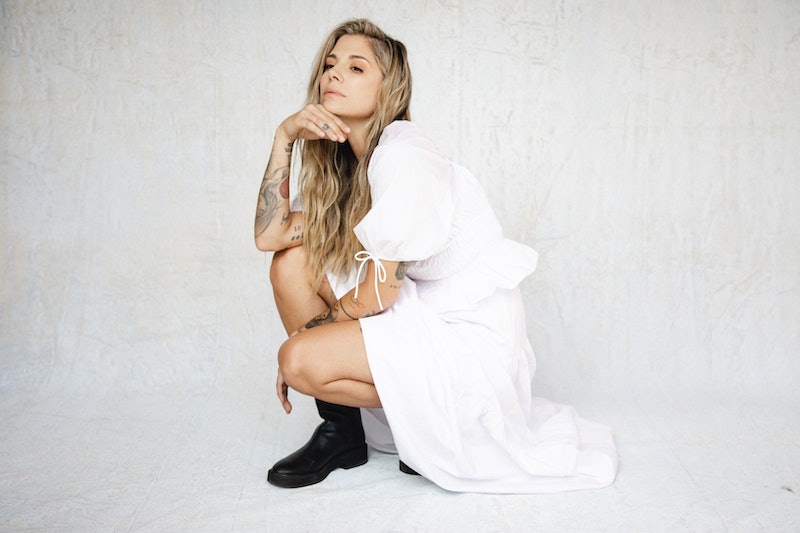 Christina Perri is a self-proclaimed emo girl. The singer calls “Jar of Hearts” — her angsty 2010 debut single for the brokenhearted — her “true essence.” A year later, though, is when the songwriter released the song she is best known for: “A Thousand Years.”

“A Thousand Years” from The Twilight Saga: Breaking Dawn — Part 1 has taken on a life of its own over the past decade, attracting billions of streams and inspiring countless covers. The love song even became a trending sound on TikTok, scoring users’ life moments. With 2.1 billion YouTube views, “A Thousand Years” is one of most-viewed videos of all-time, ranking No. 76 out of hundreds of millions of videos as of 2022, just ahead of Adele’s “Rolling In The Deep,” Rihanna’s “Diamonds,” The Weeknd’s “Starboy,” and Guns N’ Roses’ “November Rain.”

“I didn’t know that,” Perri, 35, tells Bustle about the song’s ranking. “ It makes me feel super grateful. That’s just so cool and amazing, but I also can’t quite comprehend it. That’s so many people watching it. … It is such a surreal concept — something that I made in my friend’s living room being viewed or listened to that many times. ... It’s just the gift that keeps on giving as far as to me and this musical legacy that I have because of it. So I’m just honored.”

In the intervening years, a lot of life has happened to Perri, and her new music reflects that. Her third studio album a lighter shade of blue explores themes of female empowerment, parenthood, and grief after the loss of her daughter Rosie in 2020. Perri assembled a team of mostly women for this album, which became important to her after hearing a statistic that only 2% of music producers are women. “That doesn’t change unless artists like me actually hire women,” says Perri, who collaborated with Aijia Grammer, Rachel Platten and Adrianne Gonzalez (“AG”) on “Surrender,” a new song written for and about mothers.

The new album is “emotional, deep, and melancholic,” says Perri, who adds that she “re-parented herself” from a sad girl to someone who is open to healing and accepting help. Ahead, Perri talks more about a lighter shade of blue and the legacy of “A Thousand Years.”

In 2022, Billboard picked “A Thousand Years” as one of the 30 best wedding songs ever, alongside classic songs from Whitney Houston, Prince, The Beatles, Beyonce, and Shania Twain. What is the legacy of this song? Why does it resonate?

It’s really funny because I was asked to write a song for the wedding scene [in Twilight], but “A Thousand Years” is actually in the credits. My friend Ryan O’Neal wrote the song [“Turning Page” by Sleeping At Last] that’s in the wedding. Then the whole world was like, OK, cool, Twilight whatever, but this is my wedding song. This is my anniversary song, the song is about my babies, the song is for my dad’s funeral. It became this much bigger thing. I’m a huge Twihard by the way, so I wouldn’t mind if it was only the Twilight song. But I really do think that its timelessness will end up being a really emotional representation of loving someone forever, whatever that context is. I think that’s where it's gonna live on forever, which is crazy.

Who is your favorite Twilight character?

I have the book covers framed on my wall from when I was a waitress, before I even had a record deal. I love Bella but also I’m Team Edward. I love Robert Pattinson. I didn’t know if I could see him as Batman — he’ll be Edward Cullen to me forever — but I loved it.

What is your favorite cover of “A Thousand Years”?

I love everyone’s covers. Especially the instrumental ones — like the Piano Guys, and I love when children’s choirs do it. There are many, many covers of that song that absolutely destroyed me and I absolutely love, but I will say one of my favorite interpretations of it is this 10-second clip on TikTok where it’s me singing “one step closer” and then it goes into a lullaby, and it’s set to people’s pregnancy announcements or puppies and kittens. That’s my newest favorite thing — being the soundtrack to people’s most important moments.

Tell us about your new song “Evergone.” What is it about and what does it mean to you?

I had already finished my whole album before my daughter Rosie passed away. When I was really underground and grieving and recovering and doing all these self-healing things, my A&R guy sent me a piece of a song. What’s funny is that in my whole career, I’ve never taken a piece of a song from someone else. I normally write every single song in the room in real time. But I listened to the song and it was a piece of “Evergone” and I was like Oh. I think I realized that I couldn’t put out an album and not mention it. I’m the most honest person ever so I’m gonna have to talk about it — I’m gonna want to talk about it.

“Evergone” was the last song we put on the album but the first song we put out. I wanted to have this song be about Rosie and about death and grief. Deciding that the person that you lost isn’t gone, that they’re with you in your breath, in every step that you take, and your mind, your spirit, your future. There’s this feeling that I wanted to describe before I introduced the rest of the album to the world to feel like I was honoring my truth. Very specifically for me, “Evergone” is about Rosie, but I feel like every single person has a story of grief, so it became very relatable.

You’re one of several celebrities who has talked openly about pregnancy loss and miscarriage. Why is it important to normalize the conversation around this topic?

The truth is, no one wants to be part of this club. You set out on your motherhood journey without ever thinking it’s gonna happen. I’m very open — I shared about my sobriety, my career, mental health, all these things — so it became another thing I shared. But I realized that people were reaching out to me because I opened that door. When I first miscarried at 11 weeks, I posted about it and I got thousands of messages from women who have been through that. These people carried me through it by sharing with me and I realized, Oh, they wouldn’t have been able to help me if I didn’t tell them this happened.

As things got worse and harder, I just naturally shared again, and I’ve never been more loved or supported in my whole life. I’ve really found the sweet spot [on social media]. I’m gonna keep talking about it and keep sharing about it and dive even deeper into it. It’s gonna always follow me and that’s fine because it’s the truth, and I just have such a love of authenticity and truth. I feel like when you tell the truth, you never run out of a story.

What do you want to tell fans about the new album?

Buckle up. [Laughs] I think I’ve understood the assignment. It sounds like me. I didn’t take a huge departure, but it sounds like I’m just a little bit older and hopefully a better songwriter. It honors my other two albums and my sound, and it sounds like an older version of me going through life just as dramatically as I always had.

Sonically, it’s the prettiest album that I have. I hired my sister-in-law to help me with all the harmonies, and I’m singing five-part harmonies myself on every song. Vocally, I think it’s really powerful. I don’t know if I can even pick a favorite [song]. These all felt like they were a part of this story about becoming a better, brighter version of myself.

More like this
'School Of Rock' Changed Joe Keery's Life Forever
By Alyssa Lapid
Paul Mescal, Man Of Mystery
By Samantha Leach and Heather Hazzan
'Grey's Anatomy's New Intern Got Advice From Dr. Bailey Herself
By Grace Wehniainen
On 'The Handmaid’s Tale,' Christine Ko Fights Back
By Gretchen Smail
Get Even More From Bustle — Sign Up For The Newsletter