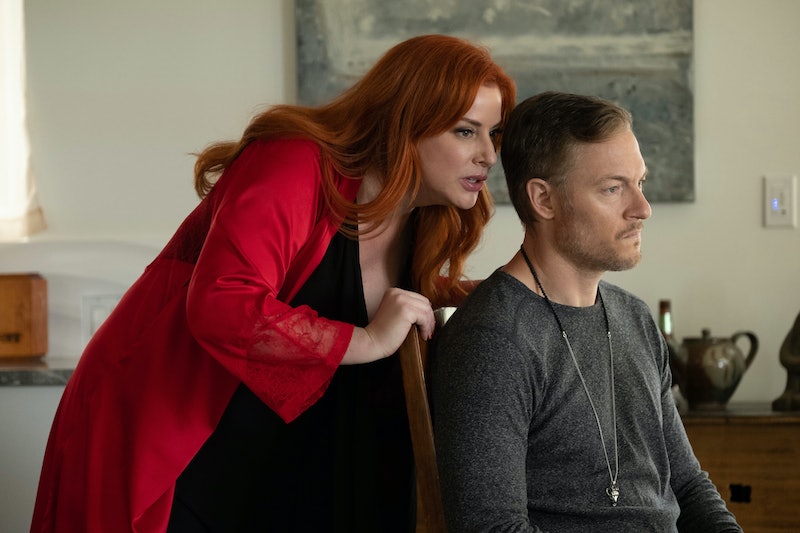 Lifetime's Circle of Deception has a pretty unbelievable plot. Set in a small, island community, it centers around a former beauty queen who teams up with her ex-lover to murder her best friend's abusive husband. But out-there as it may sound, it's actually inspired by a real story. According to the Lifetime website, Circle of Deception is based on the best-selling true crime book Practice to Deceive by Ann Rule.

The movie and the book chronicle the 2003 murder of Russel Douglas, who was shot in Whidbey Island, Washington two days after Christmas, according to CBS News. As detectives investigated the case, they noticed that Russel Douglas had exchanged calls with former Ms. Washington pageant queen Peggy Sue Thomas in the days leading up to his death. When questioned, Thomas said that she was friends with Russel's estranged wife Brenna Douglas and that she'd called Russel Douglas because she wanted to give him a Christmas gift.

CBS News reported that the investigation went nowhere for several months until a man named Bill Hill called a tip line claiming that his bandmate Jim Huden had admitted to the murder (Huden has maintained his innocence). Before police could arrest Huden, he fled to Mexico and hid out there for the next several years.

According to the South Whidbey Record, it wasn't until 2011 that police finally tracked Huden down in Veracruz, Mexico. He'd been working as a music tutor under the name Maestro Jim. After his arrest, police also arrested Thomas, who had been dating Huden when Russel Douglas was killed. Per the Seattle Times, prosecutors alleged that Thomas lured Russel Douglas to his death under the pretense of giving him a Christmas gift and that Huden carried out the actual murder. The prosecution believed that the duo orchestrated Russel Douglas' death after learning that he was allegedly abusing Brenna Douglas and their children.

However, Thomas has always claimed to be innocent and contested the prosecution's theory about domestic violence. Per the South Whidbey Record, court records showed that Brenna Douglas sought a domestic violence protection order against Russel Douglas seven months before his death. But according to another CBS New article, Thomas denied that Brenna Douglas ever outright said she wished her husband would die. "At one time, she did say something, 'He's worth more to me dead than alive.' Brenna spoke, I guess, to a lot of people about hers and Russ' marriage," Thomas said. (Brenna Douglas was never linked to or charged in connection to the murder).

Ultimately, both Thomas and Huden were convicted and sentenced to prison for their roles in the crime. CBS News reported that police recovered a gun that belonged to Huden which matched the weapon used on Russel Douglas. He was sentenced to 80 years for first-degree murder. Thomas took a plea deal and was sentenced to four years in prison for "rendering criminal assistance." She was released in August 2016. Huden is still serving his 80-year sentence at the Washington State Penitentiary and is now 67 years old.

More like this
Gabby Petito’s Family Responded To The New Lifetime Movie About Her Final Days
By Grace Wehniainen
Everything To Know About The Long-Awaited ‘Community’ Movie
By Stephanie Topacio Long
The 50 Most Powerful Characters In The Marvel Universe, Ranked
By Johnny Brayson and Nola Pfau
'Peaky Blinders' Creator Shares Exciting Update On The Upcoming Film
By Sam Ramsden
Get Even More From Bustle — Sign Up For The Newsletter