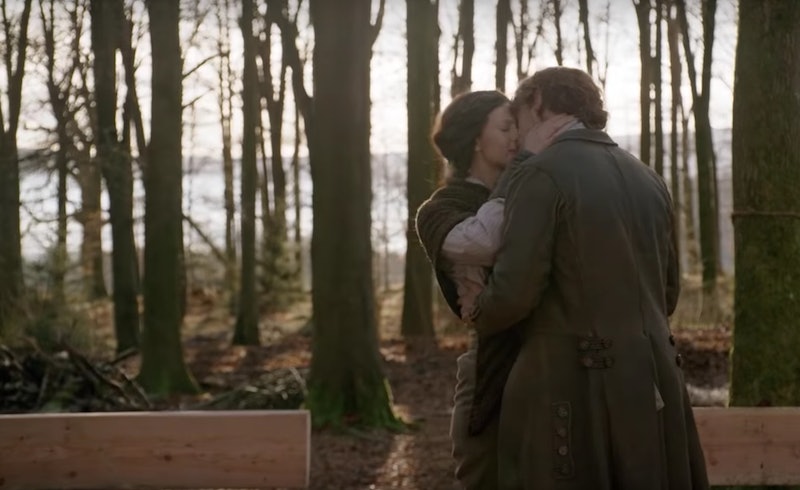 Claire and Jamie Fraser have not had a particularly conventional marriage. They've battled through witch trials, Jacobite uprisings, shipwrecks, and Black Jack Randall's evil plots. Not to mention the fact that Claire has traveled through time (twice!) to meet, fall in love with, and return to her Scottish husband from the 1700s. All of which is to say that Jamie and Claire haven't really had the chance to enjoy domestic bliss. But Jamie and Claire's relationship will finally be more grounded in Outlander Season 4.

"It's the first time Claire and Jamie have never really been able to have that regular home life where they just are enjoying each other's company without all of these external forces sort of pulling them apart," says Caitriona Balfe, who stars as Claire. "And so, I think it's a really nice, new exploration of their relationship." The end of Season 3 saw Claire and Jamie, exhausted by months of searching for Jamie's nephew, Ian, shipwrecked on a beach in the New World. In Season 4, Jamie and Claire will begin to make a home for themselves in the Colonies, building a house, living off the land, and just enjoying life with one another.

Balfe sees this domesticity as a bit of a departure from Claire's usual role in the series. "For me it's a very different side of Claire. This is probably the most domestic and nurturing [she's ever been.] It's [a] much more typical female role in some ways," Balfe explains. "But that was also quite nice because I think other seasons we've sort of looked at her very much as the career-driven woman, or being this much stronger, more forward [person]. And this is a much gentler side. It's a quieter version of her. And it's nice to explore those two different sides and get a balance."

Just because Jamie and Claire have settled into homemaking, however, doesn't mean they won't face their usual bout of adversity. They're dealt many challenges in the New World, from navigating relationships with Native Americans — understandably unhappy about more colonists settling on their land — to escaping the evil clutches of Stephen Bonnet, a pirate and a smuggler with a charming exterior and a malicious core.

And even though Brianna and Roger have been left behind in the 20th century, they may soon embark on an adventure of their own. According to Variety, Sam Heughan (Jamie) confirmed Brianna will reunite with her father. That could be via a flash-forward or dream of some kind, but it more likely means Brianna will go through the stones and reunite with her parents. In the meantime, Jamie has been trying his best to make a life for himself and Claire that his daughter would be proud of.

"For Jamie, this season actually is about Brianna. In a way it's driving everything," Heughan tells Bustle. "He desperately wanted to be an influence in her life, and there's an opportunity to do that. He wants to be a father and wants to be surrounded by those that he loves and that's what he's always wanted."

More like this
Netflix Shut Down 'Bridgerton' S3 Rumours About A “Very Dark” Storyline
By Bustle
This 'Gossip Girl' Wardrobe Error Has Gone Viral On TikTok
By Alyssa Lapid
'The Last Of Us' Has Officially Been Renewed For Season 2
By Darshita Goyal
Everything To Know About 'RHONY' Season 14
By Jake Viswanath, Alyssa Lapid and Brad Witter
Get Even More From Bustle — Sign Up For The Newsletter
From hair trends to relationship advice, our daily newsletter has everything you need to sound like a person who’s on TikTok, even if you aren’t.

This article was originally published on November 4, 2018