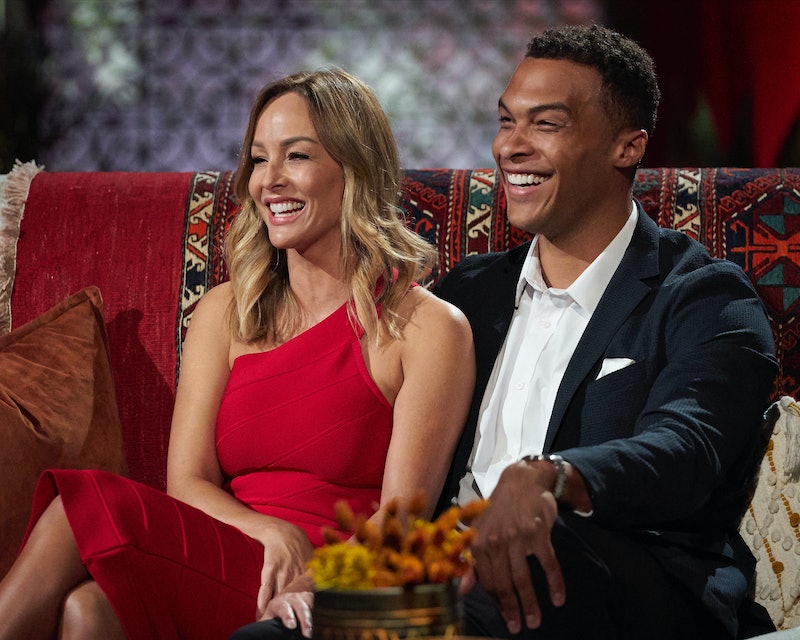 Another major relationship milestone has been reached. On Thursday, Nov. 26, Clare Crawley and Dale Moss celebrated Thanksgiving together at the former football player's family home in La Jolla, California, after embarking on a cross-country road trip to meet one another's loved ones. The couple, who fell in love and got engaged after just two weeks on The Bachelorette, shared some videos from their holiday celebration on their Instagram stories.

"At the Moss family farm over here, with the chickens," Dale said on his story, as he showed Clare exploring the chicken coop in the backyard. Later, Dale posted a photo with his father on Instagram, where he reflected on the past year of his life. "At this time last year my father and I were spending the holidays in this exact same place. It’s crazy the difference a year makes!" he wrote. "This has been the most transformative year of not only my life, but I feel for our entire family."

Dale added that he was "so thankful for everyone who’s come into my life [and for] each experience that have gotten me to this point." Clare, meanwhile, shared some more low-key memories from the big day on her Instagram story, posting a photo of a plate full of food. "My heart is full," the former Bachelorette captioned the snapshot before she shared another picture later in the day of her and Dale cuddled up in bed together, her fiancé serving as the "little spoon."

Since their whirlwind romance began on the set of The Bachelorette, Clare and Dale have been planning to move through several other major milestones just as quickly. On Nov. 5, the day after their engagement aired on TV, the couple told fans during an Instagram Live session that they had already begun "house hunting" so that they could move in together.

"The great thing about all of this is, you know, we've already been looking [for a home together] and we have the ability to be any and everywhere we want to be," Dale said, after a fan asked if they planned to date long-distance. "We went house hunting the other day," Clare added. During an appearance on the Bachelor Happy Hour podcast a few days later, Clare and Dale also revealed that they have already talked about having children. "I talk about babies all the time. And he’s like, ‘Yeah, that’s what I want.’ It doesn’t scare him," she said.

However, the pair aren't in such a rush to tie the knot, though they have talked about getting married sometime in the future. "You know how it kind of is with guys," Clare said. "He’s not scared of anything. But I’m like, ‘Here’s my wedding dress idea, and here’s the wedding date I wanna get married.’ And he’s like, ‘OK!’ ... We don’t have anything crazy planned right now. Genuinely, he knows what I want to do. I just want to go to Target together."

And, as she told People in November, the couple are happy to just be together and enjoy being in love: "Everything since the show has been reaffirming of why I chose Dale. He's even better off camera, in person, one on one at home. Dale is the yin to my yang. And this is the happiest I've ever been."

More like this
Here's Exactly When Rachel & Tino's Fight Happened After 'The Bachelorette'
By Grace Wehniainen
Bachelorette Gabby Kissed Her New Fiancé On 'Dancing With The Stars'
By Jake Viswanath
Here's What Happened After Rachel & Aven Left The 'After The Final Rose' Stage
By Grace Wehniainen
Where Is Former Bachelor Host Chris Harrison Now & What Is His Net Worth?
By Hugh McIntyre
Get Even More From Bustle — Sign Up For The Newsletter