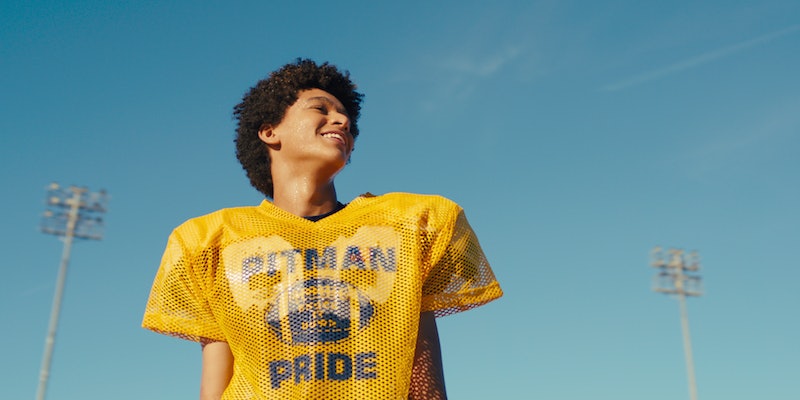 As an NFL quarterback, Colin Kaepernick was known as a double threat: just as lethal with his arms as he was with his legs. During his 2012 season with the San Francisco 49ers, he broke multiple rushing records and became only the third player in NFL history to run for two touchdowns and pass for two others in a playoff game. The next year, he led the team to a 12–4 record. But as anyone who’s ever heard “taking a knee” knows, Kaepernick’s legacy extends far beyond football.

Netflix’s Colin in Black & White, a drama series narrated by Kaepernick and starring Jaden Michael as a young version of him, chronicles his childhood in California. Much of the show is centered around Kaepernick’s emotional and cultural balancing act as a biracial kid in a white family and predominantly white city, illustrating the formative events that helped to shape him into an activist as well as, of course, his aspirations to become an NFL player. But in documenting his time at Pitman High School in Turlock, California, it also reveals the depth of his athletic skill in other sports.

Kaepernick earned most of his high school accolades as a baseball pitcher, having developed a 94-mile-per-hour fastball and thrown two no-hitter games. This earned him scholarship offers from Notre Dame, Tennessee, and Arizona State, but Kaepernick was determined to play football. He eventually earned a football scholarship to the University of Nevada, but it was the only school to offer him one in part due to his size. “Though he was 6-foot-6, he only weighed around 170 pounds and was described as ‘paper thin,’” Andrea Adelson wrote for ESPN. Because his coaches at Pitman did not want him to get hurt, Kaepernick would just throw the ball and hand it off during football games, which didn’t attract much attention from college recruiters.

"When I got done [playing] there were parents coming up to me asking who I was and where I was going to school," a 22-year-old Kaepernick told ESPN in 2010. "It was hard telling them, 'I don't have a scholarship offer.' Everybody was like why not? That was frustrating for me. Ever since then, I've had a chip on my shoulder and something to prove."

Proving himself is a running theme for Kaepernick in Colin in Black & White. In the show’s trailer alone, he’s chided by coaches who wonder how an afro could fit under a football helmet and told that he has the talent of a starting quarterback but not “the look” — both criticisms his white teammates don’t have to face.

In a promotional interview with Netflix, Kaepernick described his high school experience as challenging yet relatable, explaining that he didn’t have “a lot of references or guides” to help him navigate the racism and negative experiences he endured growing up. He hopes Colin in Black & White will help to change that for other kids. “I want Black and Brown kids and their communities to find guidance in how we can combat racism and oppressive systems. I hope someone can see that they too can come out on the other side and be able to say, ‘I faced those struggles. I've worked through them, and I was able to be successful and come out the other end, keeping my dignity and my identity intact.’”

More like this
Nicola Coughlan Shared A Lady Whistledown Excerpt From ‘Bridgerton’ Season 3
By Grace Wehniainen, Alyssa Lapid and Sam Ramsden
What’s New On Netflix: Ana De Armas’ 'Blonde' & A Nick Kroll Special
By Arya Roshanian
'Elite' Season 6 Is Arriving Sooner Than You Think
By Gretchen Smail and Grace Wehniainen
Devi Is Going To Meet A “Smoldering Bad Boy” In ‘Never Have I Ever’ Season 4
By Jack Irvin and Gabrielle Bondi
Get Even More From Bustle — Sign Up For The Newsletter