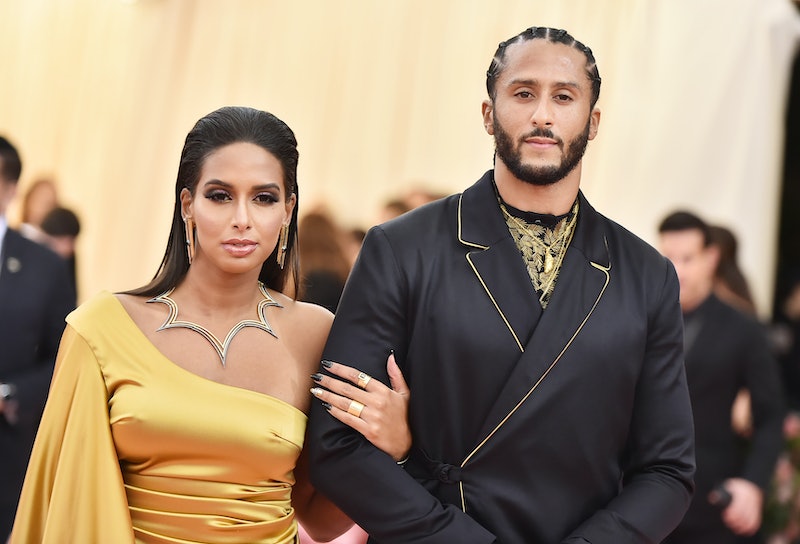 At long last, Netflix is releasing its new drama Colin in Black & White, and perhaps no one is more excited than Colin Kaepernick’s longtime girlfriend, Nessa Diab. She’s been clear that she could not be more proud of her athlete-turned-activist partner, who co-created the limited series with acclaimed filmmaker Ava DuVernay. The six episodes explore Kaepernick’s “formative years navigating race, class and culture while aspiring for greatness.”

Longtime fans of the former football star have been following his career since he began as a backup quarterback on the San Francisco 49ers in 2011. The following year, he became the team’s starting quarterback and led them to their first Super Bowl since 1994. Kaepernick went on to play for the 49ers for six seasons, but what happened on the field when the clock was ticking is only one part of his story.

In 2016, the NFL star began peacefully protesting police brutality and systemic racism by kneeling during the national anthem. The move proved to be a controversial one, with some people defending the athlete’s freedom of speech and right to protest, while others criticized him for disrespecting the flag. “I am not going to stand up to show pride in a flag for a country that oppresses black people and people of color,” Kaepernick told NFL Media at the time. “To me, this is bigger than football and it would be selfish on my part to look the other way. There are bodies in the street and people getting paid leave and getting away with murder.”

As the heated debates about Kaepernick continued over multiple years, there was one person who stuck by his side through it all: Diab. The former football star reportedly met the radio jockey and TV presenter for the first time in 2015, and six years later, they’re still going strong. However, the two have largely kept their romance out of the spotlight, so here’s a complete timeline of their relationship as Kaepernick’s origin story hits Netflix.

Although Kaepernick and Diab were first linked in 2015, they didn’t officially confirm their relationship until February 2016, when they attended a charity function together. The two had already been together for months before they made their debut as an “official couple” at the Valentine’s Day event, according to TMZ’s sources at the time. They also founded the Know Your Rights Camp together that October, an organization that “advances the liberation and well-being of Black and Brown communities and elevates the next generation of change leaders.”

Unfortunately, their relationship was almost immediately challenged by Kaepernick’s controversy, which the Hot 97 host was partially blamed for at the time. A few months after the athlete started dating Diab, Iowa Congressman Steve King accused the Girl Code star, who is Muslim, of “changing his political views” in an interview with Newsmax TV. King also made the racist and Islamophobic claim that Diab was “sympathetic to ISIS.”

Around the same time, Kaepernick reportedly denounced rumors started by right-wing conspiracy theorists that he converted to Islam. “I have great respect for the religion, know a lot of people that are Muslim and are phenomenal people,’’ he said, per USA Today. “But I think that [rumor of conversion] comes along with people’s fear of this protest, as well as Islamophobia in this country. People are terrified of them to the point where Trump wants to ban all Muslims from coming here, which is ridiculous.”

Kaepernick also addressed accusations that Nessa influenced his activism, which conservatives saw as anti-American. “The impact is just conversations that we constantly have,’’ he said. “This is an open discussion that I have with many people, not just my woman. She is Muslim, her family is Muslim, I have great respect for them. I have great respect for people’s right to believe what they want to believe. And I don’t think anybody should be prosecuted for judged based on what their beliefs are.”

In March 2017, with one year left in his 49ers contract, Kaepernick announced his decision to opt out and become a free agent. He’s been on his own ever since, but according to former pro football player Ray Lewis, the Baltimore Ravens were very close to signing him in 2017. “We were going to close the deal to sign him,” Lewis told Showtime’s Inside the NFL that September.

The decision to not follow through with the deal reportedly had nothing to do with Kaepernick and everything to do with Diab. In August, she tweeted out an image that compared Lewis and Ravens owner Steve Bisciotti to the characters in Django Unchained. In the film, Samuel L. Jackson plays a loyal slave and Leonardo DiCaprio is the plantation owner. “Steve Bisciotti said: ‘I want to hear Colin Kaepernick speak to let me know that he wants to play football.’ And it never happened because that picture comes up the next day,” Lewis said. (The Ravens denied that Bisciotti had “blocked” the signing of Kaepernick in August, with the team’s general manager, Ozzie Newsome calling the claims “wrong,” per The Baltimore Sun.)

According to The Guardian, Kaepernick said he would stand for the national anthem if he was picked up by a team. But in October 2017, Diab slammed the reports as false. “The reports that Colin will stand for the anthem are completely false!” she tweeted. “He has never discussed this with anyone.”

Apart from all of the NFL drama that ensued, 2017 was also the year that Diab appeared on the quarterback’s Instagram for the first time. In the boomerang that he shared to his Instagram feed, the two posed side-by-side at the annual Time 100 gala. He didn’t caption the post, but Diab made her feelings about the athlete clear when he was named GQ’s 2017 Citizen of the Year in November.

“Colin has always been helping people, he has always been involved, because he has empathy,” she wrote for the magazine. “Empathy was a reason why he was adopted: His parents — two of their children had passed away from heart defects. It’s why he helped so many young children with heart defects get proper care — he’s been doing that for years. I’m very fortunate that I have Colin next to me. It’s everything. We love each other, we care for each other, and we have to remind each other that, hey, we’re doing our part, we’re trying to make a difference.”

The following year, Kaepernick gushed over his girlfriend when she helped him out with his pledge to donate $1 million to charities that serve oppressed communities. “Words cannot express my gratitude for everything you’ve done with me,” he said in a video he shared on Instagram in February. “I look forward to what we will accomplish in the future together! I Love You, Queen!”

Kaepernick and Diab may spend a lot of their time tackling serious issues, but they also enjoy a night out here and there. In November, they attended the premiere of A Wrinkle in Time together. In June, he shared a photo to his feed of Diab wearing a football jersey that said “#IMWITHKAP.” But by the end of the year, the NFL drama caught up with them again.

According to TMZ, when football player Eric Reid told reporters that Kaepernick was ready to make a comeback, Diab confirmed it was true before throwing shade at the NFL. “Colin trains every day,” she reportedly said. “All the teams know. But they’d rather keep blackballing him.” She said the NFL and team owners and management “are the ones who don’t want him to play,” adding, “Journalists should ask the league why they’re blackballing Colin.” (Whether or not the league colluded to keep Kaepernick out was the focus of a 2017 lawsuit that the two sides eventually settled in 2019; the terms of the settlement were not disclosed.)

In December, she called the league out again on Instagram. “I really don’t like y’all,” she wrote alongside a photo of her and Kaepernick holding hands. “Lol. If it wasn’t for @kaepernick7 I probably would have slapped the 💩 out of all you clowns. But I’m a better person now. Lol #imwithkap.” She also included a middle-finger emoji and tagged the NFL.

Kaepernick and Diab proved how strong of a couple they are in May 2019, when they showed up at the Met Gala in outfits that honored their roots. “MET GALA 2019,” the quarterback wrote alongside a photo from the star-studded event. “We pay homage to our ancestors with our looks inspired by Ghana and Egypt. Thank you to Anna Wintour & @voguemagazine for having us.”

A few months later, Diab made headlines again for criticizing Jay-Z’s business deal with the NFL. The rapper’s company Roc Nation was reportedly teaming up with the league on events and social justice activism. “I don’t mind you doing a business deal — but I do mind you wrapping it in social justice when you’re working with an organization that denies someone an opportunity,” the radio host said on Hot 97.

Diab continued to fight for her man’s career well into 2020. In January, she called out Trump and NFL commissioner Roger Goodell on Twitter when it was announced that the president’s campaign was spending $10 million on a Super Bowl ad. A few months later, when a false report surfaced that Kaepernick was signing with the New York Jets, Diab encouraged the team to go through with it. “Any team that actually wants to win should sign Colin,” she wrote.

In May, Diab came for Goodell again when she noticed that her boyfriend was falsely listed as “retired” in his profile summary. “Colin did NOT retire,” she tweeted alongside a screenshot of Kaepernick’s page. “You cowards blackballed him bc he peacefully protested against police brutality. He’s a Superbowl QB & should be playing bc his stats show that.”

For the most part, Kaepernick and Diab stayed out of the spotlight in 2021, but that might be because the former footballer has been busy working on his upcoming Netflix series, Colin in Black & White. The six-episode drama will give fans of the athlete an inside look at what it was like being adopted and raised by white parents. The show stars Mary-Louise Parker and Nick Offerman, and at times, Kaepernick himself speaks directly to the camera.

Kaepernick has been posting frequently about the upcoming series and his girlfriend has been doing the same. “READY!!!️” she wrote on Instagram earlier this month alongside the show’s official trailer and several heart emojis. On Oct. 26, the couple seemed excited to finally share the project with the world at a special screening in New York.

Colin in Black & White premieres on Netflix on Friday, Oct. 29.