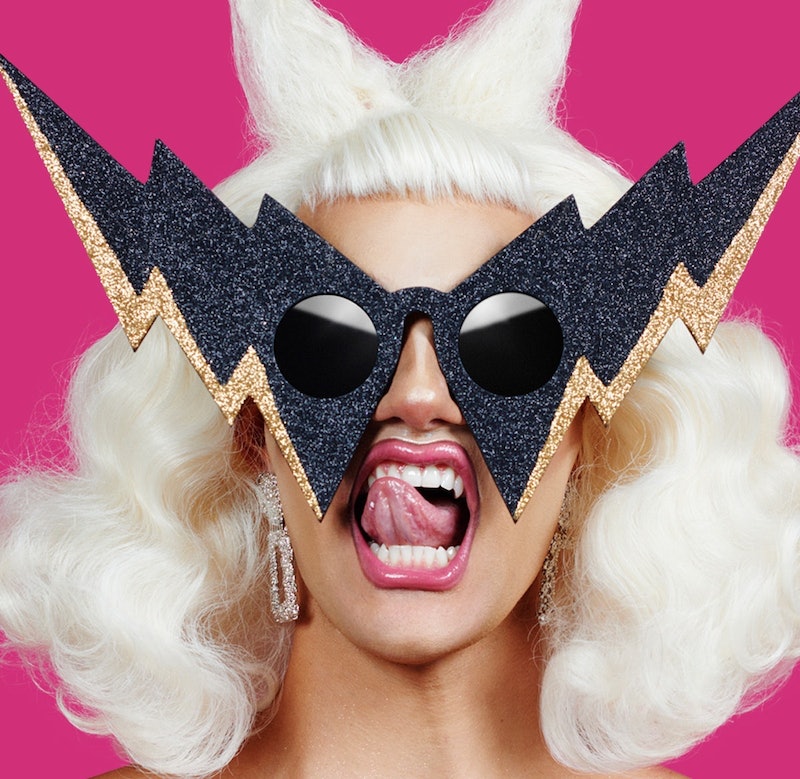 Growing up in 1980s Nova Scotia, drag sensation Crystal didn't have any openly queer idols to look up to. "Probably the closest one was David Bowie, but I don’t know if he would’ve called himself queer," she reveals to me over the phone. Her Bowie obsession arose from the singer's embrace of gender non-conformity, and it wasn't until later in life that the Drag Race UK star began appreciating notable queer figures like Beth Ditto and Olly Alexander.

Hosting World of Wonder's The Things That Made Me Queer podcast, Crystal finds this to be a common experience among many in the queer community. In the podcast, Crystal, who's now based in London, speaks with prominent guests who each reflect on pivotal moments from their past which have helped mould their queer identities.

Drag Race favourite Detox, hitmaker MNEK and renowned author Juno Dawson are some of the names to have appeared on the audio series thus far. These guests provide listeners with an oral history of their unique and continuing queer journeys, covering everything from personal relationships to pop culture milestones and beyond.

Crystal believes this kind of self-reflection is vital, especially for queer people. "I think these journeys are something that all queer people should have a think about," she explains. "What shaped them, why are they who they are today, and what factors externally helped them understand themselves."

In the competitive field of queer-centric podcasts, Crystal knows she's in good company. She names Unflopped, Homosapiens and Queery as some of her favourites. But the Drag Race alumni is confident her carefully crafted show and lineup of guests will ultimately set Things That Made Me Queer apart.

"I wanted it to have some format so that you knew what it was gonna be like every episode. Those are my favourite kind of podcasts," she tells me. "I’ve also been careful to pick guests that I think have something to say."

"I think these journeys are something that all queer people should have a think about. What shaped them, why are they who they are today, and what factors externally helped them understand themselves."

As for her hopes for the project, Crystal strives to "provide entertainment with a bit of heart," sharing some "hopefully inspiring" queer stories along the way. Of course, Crystal's own queer story is something to be inspired by, and her success as a drag performer has led her to become the kind of queer icon she longed for as a child.

"I discovered drag in the UK through the East London scene," she says, discussing some of her drag inspirations. "I didn’t grow up here, so I wasn’t exposed so much to your Dame Edna’s and your TV queens that were big here. So, it’s all of the people that I work with on a regular basis, like Baby Lame, Freida Slaves, Margo Marshall, and Ruby Jones."

Crystal eventually brought her talents to the Drag Race UK runway, appearing on the BBC competition show's first-ever series in 2019. Reflecting on her Werk Room days, she says she is "grateful" for what turned out to be a "full" experience. "It was like the most incredible thing, but also the hardest thing — and it was much harder than I thought it was going to be. I’ll just say that."

As well as competing on the show, Crystal is also a huge admirer of the ever-evolving Drag Race universe. One of her favourite elements of the groundbreaking franchise is the emotional mirror chats between rival queens, which usually occur ahead of the mainstage maxi-challenges (a recent example was the conversations between Drag Race UK's Ginny Lemon and Bimini Bon Boulash). Crystal credits the segment for "helping a generation of queer people to understand their own identity."

"It's still rare in mainstream media to see queer people talking openly, earnestly and honestly about what it’s like to be them."

"It's still rare in mainstream media to see queer people talking openly, earnestly and honestly about what it’s like to be them." She adds: "You know, we had Queer Eye for the Straight Guy in the early-2000s and that was like a watershed moment in gay acceptance. But, it was just one version of what it was to be gay and I think Drag Race has shown a much wider breadth."

In the months following her BBC Three debut, the COVID-19 pandemic put an abrupt halt to Crystal's post-Drag Race itinerary. However, obvious physical setbacks never deterred her from putting on a show, no matter how out of the ordinary. "I performed for a pharmacy conference from my bedroom in full drag. It is just weird the stuff I’ve done in the last year," she recalls.

Although this situation was far from ideal, Crystal acknowledges she was in a "privileged position," being able to (virtually) perform in the midst of a global crisis, and she's been disheartened by the government's support of her creative peers. Many of whom are struggling to make ends meet. "Fuck the Tories, basically," she says, adding: "I know a lot of people who have fallen through the cracks. Definitely, for self-employed people, which is a lot of artists, the support just hasn’t been there."

Offering words of encouragement to fellow queens in lockdown, Crystal shares advice given to her by a dear friend: "Treat lockdown three as an input phase rather than an output phase. Read some books, watch TV, listen to music, get inspired, take it all in. Then, as soon as we're out you'll have all of those creative juices ready to go." She concludes: "We just have to hold on."

Crystal's original World of Wonder podcast The Things That Made Me Queer is available now.