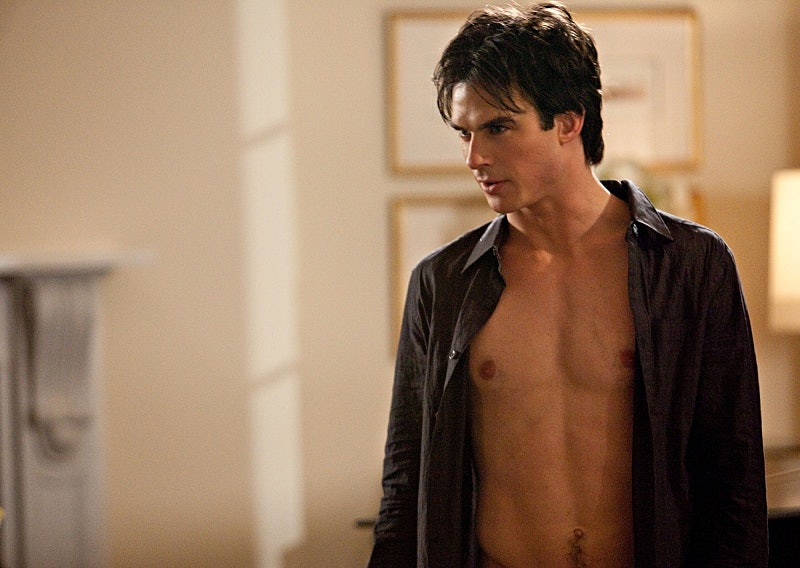 There are many good reasons to become invested in a show like The Vampire Diaries. Running from 2009 to 2017, the show’s writing is fantastic, the characters are instantly lovable, and the entire storyline is impressively complex. There’s the love triangle between two smoking hot vampire Salvatore brothers and innocent human Elena Gilbert — first, Elena falls for Stefan, but is slowly drawn in to the lure of sarcastic, sexy (and often shirtless) Damon Salvatore. Their chemistry is part of the reason for the show’s cult following, resulting in two spinoff series: The Originals and Legacies.

However, I — much like most Mystic Falls humans — feel compelled to tell you that there’s another reason fans keep all eight seasons on a replaying loop on Netflix. It has nothing to do with plot and everything to do with the one and only Ian Somerhalder, who plays bad boy vamp Damon Salvatore. While TVD's hotness scale in general is out of this world, most who identify as Team Damon will tell you they were ultimately powerless to escape the allure of the Smolderholder from the very first “Hello, brother.” All it took was one look into those beautiful blue eyes, and the world was hooked.

But as all dedicated fans of the series know, we've seen a lot more of this character than just his eyes. Creator Julie Plec and company have been kind enough to grace us with numerous Damon Salvatore shirtless scenes throughout the years, all of which are extremely swoon (and highly drool) worthy. In fact, it's high time that chiseled chest got the proper recognition it deserves, which is why I've taken the liberty of ranking Damon's shirtless moments from slightly sizzling to positively scorching. (Hey, it’s a tough job, but somebody’s gotta do it.) Also, you're welcome.

10. When Katherine Steals The Moonstone

While in the bathroom to wash some John Gilbert blood from his hands, Damon gets a very unfortunate call from Stefan. Katherine has the moonstone — which is an apparent shock to Damon, but honestly, his hiding location in the soap dish was a pretty poor (and obvious) choice. At least his abs make up for his lack of foresight.

9. When Damon Crashes At Ric’s

While the Salvatore residence was occupied by the Heretics, thankfully Alaric had ample plumbing for Damon to conduct his infamous shower scenes. Wheew. Elena may have been absent from the show via her eternal sleeping coma tied to Bonnie’s life at this point in the series, but the Damon towel scenes kept on rolling — lucky for us.

8. When Rebekah Snatches And Tortures Him

Rebekah is not the forgive and forget type. And when Damon used her, she was more in the mood for revenge. While this is a lovely example of a good rip-shirt scene, adding bloodshed and torture into the mix immediately afterward kind of kills the mood (some people would much prefer to see Stefan tortured than precious Damon — if it were between the two — sorry, not sorry). So, as far as Damon Salvatore shirtless scenes go, this one could use a little more skin and a lot less bloodshed.

7. When He Almost Strips In Front Of Elena’s Mom

OK, it is a little weird that he’s been with Isobel, aka Elena’s birth mom. But that’s neither here nor there. Damon pays scheming Isobel a surprise visit and entertains himself with a little game of strip poker while he waits for her arrival. Things are just getting interesting when she returns, cutting the game short. Sigh. Isobel really does ruin everything.

6. When He Almost Strips In Front Of Elena

You’ve got to love when Damon teases Elena, but even more so when it involves him stripping down right in front of her. Things are extra awkward at this point, as she is trying and failing to make things work with Stefan as a newbie vampire, while also attempting to suppress her feelings for Damon. If there’s any moment to send her over that threshold between Salvatores, it’s Damon casually ridding himself of his shirt and unbuttoning his pants as he says to Elena in the most nonchalant way possible, “You staying for the show, or?” I mean, if she’s not, I am.

5. When He’s Showering And Watching The News

This scene is honestly just hot for no reason. Damon is standing under a steamy stream of water and then wraps himself in a towel before briefly catching the news. Was his shirtlessness necessary for the plot? No. Is anyone mad about it? Also no, definitely not.

4. When Damon’s Abs Spark That Kiss

Delena’s first real kiss at the Denver motel is another top-tier moment for the books that also doubles as a shirtless Damon gift from the heavens. Not even Elena could resist such a massive temptation of bourbon and abs. And who could blame her? He’s showing the goods right in front of her very eyes and letting the tension bubble until it’s boiling over.

3. When He Has A Dance Party With Vicki

After thinking he’d thoroughly drained Vicki of every drop of her blood along with her friends at the Salvatore crypt, Damon was surprised to find that she survived. So, what’s a vamp to do? Take her home for a clothing-optional dance party, of course. Damon wiggling his hips at the top of the balcony with a fully exposed pack of abs will never get old.

2. When He Gives Elena A Surprise Show

It’s hard to beat a scene that offers up more than just a shirtless Salvatore. This one from the Season 3 premiere is extra generous because we get some bathtub action between Damon and his fake girlfriend, Andy, and then he struts his naked self right out of said bathtub. When he strolls into his living room, an unsuspecting Elena gets quite the view — before she gasps and covers her eyes, of course. His trademark sassy antics pair with nudity make this one of the best Damon Salvatore shirtless (and clothes-less for that matter) scenes of all time.

Delena’s first time was memorable for a number of reasons. First, this had been a long time coming, and for Delena fans, this moment felt like Christmas. But at the same time, Stefan and Caroline are putting it together that Elena is sired to Damon, which heightens the entire situation. Pair that with some Ed Sheeran and Elena straddling a shirtless Damon Salvatore, and you’ve got one of the most intensely spicy scenes of the series. Enjoy.

More like this
Anne Hathaway Shared A "Thrilling" 'Princess Diaries 3' Update
By Darshita Goyal
Rupert Grint Just Shared A *Major* Update About Ron Weasley’s Future
By El Hunt
Netflix Shut Down 'Bridgerton' S3 Rumours About A “Very Dark” Storyline
By Bustle
This 'Gossip Girl' Wardrobe Error Has Gone Viral On TikTok
By Alyssa Lapid
Get Even More From Bustle — Sign Up For The Newsletter
From hair trends to relationship advice, our daily newsletter has everything you need to sound like a person who’s on TikTok, even if you aren’t.

This article was originally published on March 25, 2015