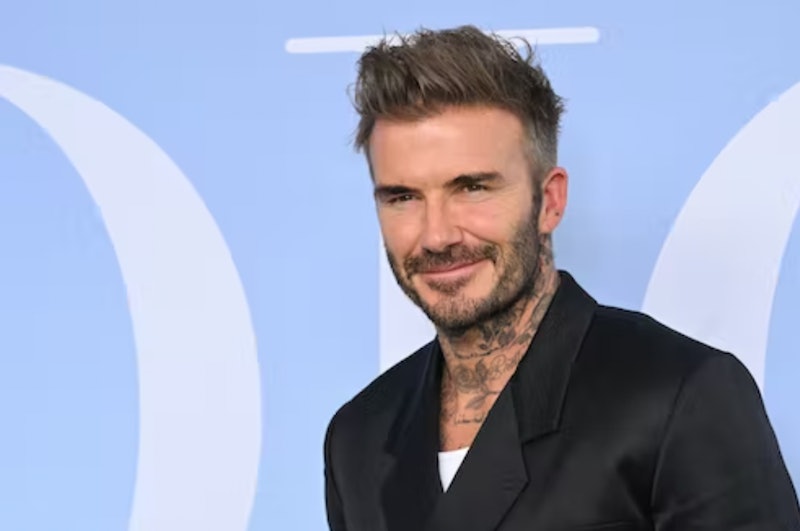 Even the 2022 World Cup is finally here, the disapproval and criticism over the host nation has very much remained. After all, Qatar has been described by Human Rights Watch as having a “dismal human rights record.” And celebrity endorsements and deals have not escaped scrutiny, either. In Oct. 2021, David Beckham signed a 10-year deal, reportedly worth £150 million, to be a culture and tourism ambassador for Qatar. A source told The Sun at the time that Beckham “believes in Qatar’s commitment to progress,” despite the country’s concerning human’s rights record, which shows discriminatory practices against women, the LGBTQ+ community, and migrant workers. Beckham found himself in quite the controversy over the summer after appearing in a 30-minute promotional advert for the country. “People in Qatar are very proud of their culture,” he says in the video. “The modern and traditional fused to create something really special.”

The football star was given an ultimatum by comedian Joe Lycett, who called on Beckham to end his relationship with Qatar. After Beckham’s silence, Lycett “shredded” £10,000. However, the footballer has finally responded following a special by Lycett for Channel 4. Here’s a play by play of the David Beckham Qatar World Cup controversy.

Qatar has made headlines for its treatment of migrant workers since it won the bid to host the World Cup in 2010. According to The Guardian, 6,500 workers have died in the country since then, with 37 deaths directly linked to the construction of the Khalifa Stadium. “There is a real lack of transparency surrounding these deaths,” May Romanoes, Gulf researcher for Amnesty International, told The Guardian.

And due to its stringent laws, Qatar has been deemed an unsafe space for LGBTQ+ people and women. Same-sex relationships and sexual activity between men and women are illegal and punishable by death by stoning under Sharia Law. However, Qatar World Cup chief Nasser Al Khater told Sky News that LGBTQ+ fans “will be welcome to display affection” and wave rainbow flags, but there doesn’t seem to be any policies set in place to ensure this will happen.

“Sadly, this year’s tournament is not safe for everyone, which is why it’s so important to see Harry Kane, alongside many other captains, pledging to wear an anti-discrimination armband,” Stonewall’s Liz Ward told The Guardian.

For women living in Qatar, there is a guardianship system in place meaning “they remain tied to their male guardian, usually their father, brother, grandfather or uncle, or for married women, their husband,” Amnesty International explained. Human Rights Watch notes that this guardianship “reinforces the power and control men feel they have over women’s lives,” which “may foster or fuel violence.”

How Have People Reacted To David Beckham’s Ambassadorship?

Public reaction to Beckham’s decision has been largely negative due to Qatar’s human rights issues. On Oct. 15, Rob Rinder condemned the footballer’s decision in an interview with the Daily Mail. “You know this is about money, not about the purity of love of the game. What a tragic moment that is,” he said.

While Amnesty International’s Sacha Deshmukh told BBC Sports that Beckham needs to “learn about the deeply concerning human rights situation in Qatar and be prepared to speak about it.”

On Nov. 13, Joe Lycett gave David Beckham a choice that if he were to end his relationship with Qatar, the comedian would donate £10,000 to charities that support LGBTQ+ communities. If he didn’t respond by the time the World Cup began on Nov. 20, he’d shred the money – live. As neither the footballer nor his team got back to Lycett, he put the money through a wood chipper — or so people thought.

The day after he “shredded” the money, Lycett revealed that the money that went into the shredder was real, but what came out was fake. The comedian had actually donated the £10,000 before he’d even posted the original tweet. “I never expected to hear from you,” Lycett said in a video. “It was an empty threat designed to get people talking. In many ways, it was like your deal with Qatar, David. Total bull**** from the start.”

Although, the comedian did shred Beckham’s 2002 Attitude magazine cover, with the permission of Attitude themselves. “We hope that David enjoys the money, because he’s lost the support of the LGBTQ community,” the magazine said in response.

What Has David Beckham Said?

After Beckham signed the deal in 2021, a spokesperson for the footballer said that he “has always talked about the power of football as a force for good.” However, following criticism of the 2022 advert, the spokesperson added that Beckham “has been visiting Qatar regularly for over a decade” and “has seen a passion for football in the country and the long-term commitment that’s been made to hosting the World Cup and delivering a lasting legacy for the region.”

Almost a month after Lycett “shredded” £10,000, Beckham’s team issued a statement in response to the comedian’s Channel 4 special, Joe Lycett vs Beckham: Got Your Back at Xmas. Lycett announced via Twitter, sharing that “as far as we are aware, this is the only statement he or his team have given to any outlet regarding his involvement in Qatar.” You can read the statement in full below.

“David has been involved in a number of World Cups and other major international tournaments both as a player and an ambassador and he’s always believed that sport has the power to be a force for good in the world. Football, the most popular sport globally, has a genuine ability to bring people together and make a real contribution to communities.”

“We understand that there are different and strongly held views about engagement in the Middle East but see it as positive that debate about the key issues has been stimulated directly by the first World Cup being held in the region. We hope that these conversations will lead to greater understanding and empathy towards all people and that progress will be achieved.”

Bustle has reached out to Beckham’s reps for further comment.

This article was originally published on Oct. 17, 2022