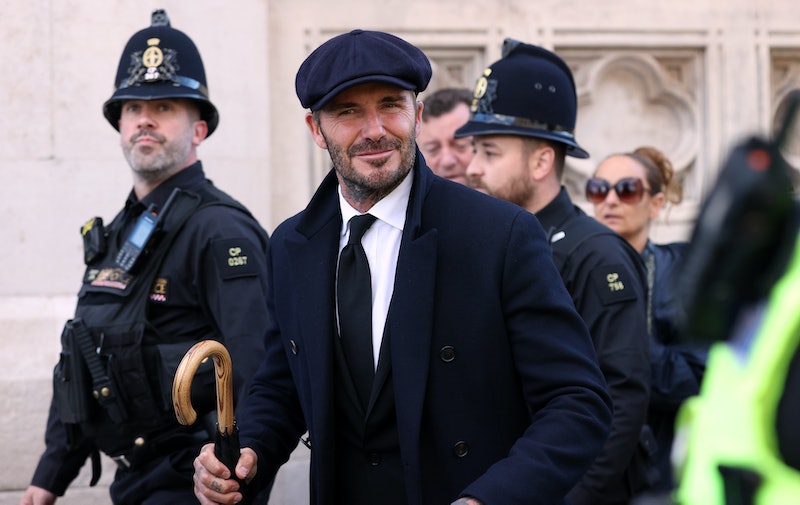 As the 10-day mourning period continues following the death of Queen Elizabeth II, members of the public are paying their respects by visiting Her Majesty’s coffin at Westminster. The Queen is lying-in-state until 6.30 a.m. on Monday, Sept. 19, the day of her funeral. Anyone is welcome to go, but you might find yourself queuing for 12 hours or more. The BBC is also providing a 24/7 livestream of the tradition, for those unable to travel. However, one man who opted to take in the momentous occasion in-person is none other than David Beckham, who joined the crowds in the early hours of the morning.

Despite early reports speculating that Beckham had skipped the queue, the former footballer confirmed to BBC News that he had waited in line for 12+ hours in order to see the Queen’s coffin. “Something like this today is meant to be shared together,” he said, before adding they’d been snacking on Pringles, sherbet lemons, and doughnuts while they waited.

Beckham follows in the footsteps of former Prime Minister Theresa May and Good Morning Britain presenter Susanna Reid, who attended the lying-in-state the day before. The latter, joined by her mum, waited over seven hours before reaching Westminster Hall.

In true internet style, the reactions to Beckham in the queue have been abundant and entertaining. From people praising the former footballer for queuing to comments about his choice of snack, there has been lots to say. Many Twitter users were also tickled by the BBC putting out a news alert about Beckham eating crisps as he waited. See some of the best online reactions, below.