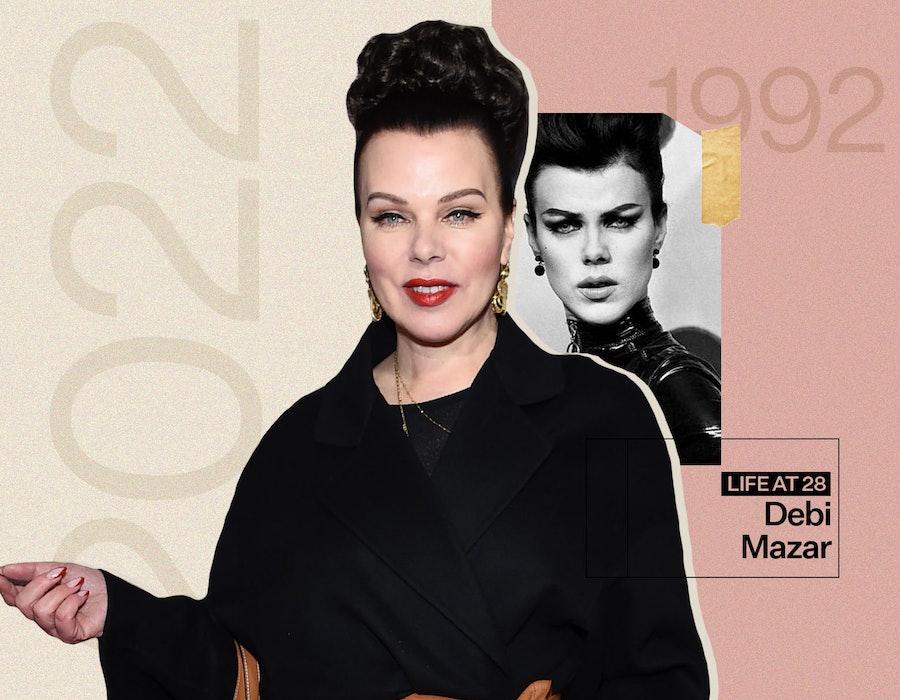 Debi Mazar has been thinking a lot about her twenties lately. She’s currently writing a memoir, and her daughters Evelina and Giulia are inching closer to their second decade. And one of her best friends, Madonna, is in production on a biopic that will bring that era of their lives to the big screen. “She blew my phone up a lot wanting to know, ‘Deb, do you remember when or what?’ So I try to help remind her of certain things and procure a few pictures for her. But it's a movie about Madonna,” Mazar, 57, tells Bustle of Blonde Ambition.

But it’s Mazar’s role in the film that recently made for tabloid fodder after it was revealed that Julia Fox auditioned to play her. “I don't know how big the role is. I know that [Madonna’s] looking at several people aside from Julia. Of course, Julia ran with it because she was doing all that publicity with the Kanye stuff,” Mazar says. “I don't know what her range is or anything. I loved her in Uncut Gems, she seems like a lovely girl.”

While Mazar isn’t concerned with who will play her on the silver screen, there are a few stories she’d be delighted to see make it into Madonna’s film. “I just hope that she has a moment of when I convinced her — because she's such a control freak and would never smoke pot — to smoke a little pot and walk up Broadway to go to my friend's house,” The Pentaverate star says. To Mazar, she and Madonna were like Patti Smith and Robert Mapplethorpe in Just Kids. They’d have sleepovers, go out dancing, and bop around the city. And much like with Smith and Mapplethorpe, their friendship was also tinged with some truly extraordinary moments. “One night we were all out and I went to the bathroom and when I came back I saw Madonna's hair going on fire. I was like, ‘F*ck.’ So I just picked up this ice bucket and dumped it on her head. She looked so angry at me.”

Of course, Mazar’s twenties weren’t all nights out with Madonna and dance parties. Mazar also found herself struggling with being typecast and neglected to save money for the future. But the one thing Mazar could always find solace in was her hometown. “It was just a great time because New York was still exciting. New York had clubs, art, and fashion. It was still edgy,” she says. Below, Mazar reflects on ‘90s New York — from going out dancing at 4 a.m. to befriending Manolo Blahnik.

Goodfellas had come out and I became the New York City “It Girl” at the moment. I started getting offers from Oliver Stone and Spike Lee and it was probably one of the greatest moments in my life. I was single; I had two homes — one on the West Coast and one on the East Coast. I got myself a brand new shiny black Cadillac Eldorado. It was really tacky. It had gold rims, a gold chain around my license plate. She was fully loaded and tricked out, because I was making TV money. I was like, "I want to drive the car the gangsters drove in Brooklyn. The cool car."

How were you feeling about your life and career?

I was figuring out, “Do I want to direct? Do I want to produce?” And coming up with ideas to create what would [have been] my first solo television series, where I had a Black character and an interracial romance. But it was too ahead of its time. CBS didn't want to have a gay character, they didn't want to have an interracial romance. I'm like, "What year are you living in?"

I was dealing with a studio system that, at the time, was extremely archaic. And I didn't have the good sense to keep my mouth shut. I always went up against the heads of studios and the heads of production offices. I was always a very professional actress — I would show up on time and I knew my lines. I was well-liked, but in terms of my creativity, I just refused to sit down and shut up. It made things stressful, but I learned a lot of good lessons in that period.

Do you have any regrets from that era?

That I didn't save money. I just thought it would just keep on coming in. I mean, did I want other roles? Did I want a different career? Of course. Every actress wants different roles and to have a better, bigger splash at certain moments. I had a couple movies that didn't do well at the box office. I had a couple of disappointments in how things turned out. I got typecast to a degree. Then I worked really hard to be un-typecast. But you know what? It's all fine.

What was your fashion aesthetic like at the time?

I would hit fabric stores and find fabulous fabric, then find a seamstress or a tailor that could construct my vision. I had a couple different looks going on. One of them was like a Barbarella sort of mod squad [look]. I had one latex outfit, other ones in pleather, I had other ones made out of Lurex. I never, ever, ever bought top-dollar couture designer fashion, because coming from no money, I just refused to spend the money on it.

Was there anything you actually splurged on at 28?

I think shoes. I was really into Manolo Blahnik. He also became a friend of mine. This is pre-Sex and the City. In fact, I was his date for the Met Gala one year.

What did a typical Friday night out look like for you?

I always went to the gay clubs because I was a dancer and for the most part, I didn't really like to drink. I just liked to smoke a little weed, drink tons of water, and dance for five hours. So the evening would generally consist of dinner, home, a disco nap. The club didn't get good until about 2 in the morning. I wasn't able to be the girl that went out to dinner, partied, had cocktails, and dragged myself to a club. I can't stay awake that late, so sometimes I would literally go to bed early, get up at 4 or 5 in the morning, roll into the club, then just stay up for the day. I would just start my day out dancing.

Who were you partying with?

For the most part, it was Drena De Niro, jewelry designer Wilfredo Rosado, Madonna. If I was in New York it was Kenny Scharf, Keith Haring. I've never been big on going to fashion shows, but I would always show up at my friend Marc Jacobs’ fashion show, because we grew up knowing each other. Anna Sui. We were the New York kids of the ‘80s, and the leftovers from the late ‘70s, whoever didn't die from that scene. So whoever is alive, we're all still in touch, and I've always been very true to my friends. I'm a Leo, so my friends mean a lot to me.

1992 was also the year you were in your fourth Madonna music video.

Oh, I just did her a favor. She's like, "Deb, could you be in my video? Would you do my video for me?" I'm like, "Yeah, sure." One time I said, “Just give me one of your outfits or something." She gave me an ALAÏA snakeskin jacket. I wish I still had it. I gave it to one of my gay friends, a male. It was too ‘80s, too extra. I was like, "This is so not my look." But I'm seeing that friend of mine in New York...

You should take the jacket back!

Maybe I'm going to get that f*cking jacket back.

I loved being 28, because I was still free. I felt in control. I felt like I had worked so hard to get to where I was that I was really, really enjoying myself. Then I had the idea that I wanted to be a mother and fall in love, and it's been great. I've been married 20 years. I have two amazing daughters. But that's a whole other journey and you're going, "Oh my god, why couldn't anybody tell me how hard this was going to be?"

More like this
Cardi B Explains To David Letterman Why She Uses Her Star Power For Politics
By Jake Viswanath
G Flip Shared How They Got Romantic With Chrishell Stause & Discussed Babies
By Brad Witter
After 'Heartstopper' Used This Indie Artist’s Song, Streams For It Soared 8,000%
By Alyssa Lapid
'Who Killed Sara?' Won’t Return For Season 4
By Brad Witter
Get Even More From Bustle — Sign Up For The Newsletter