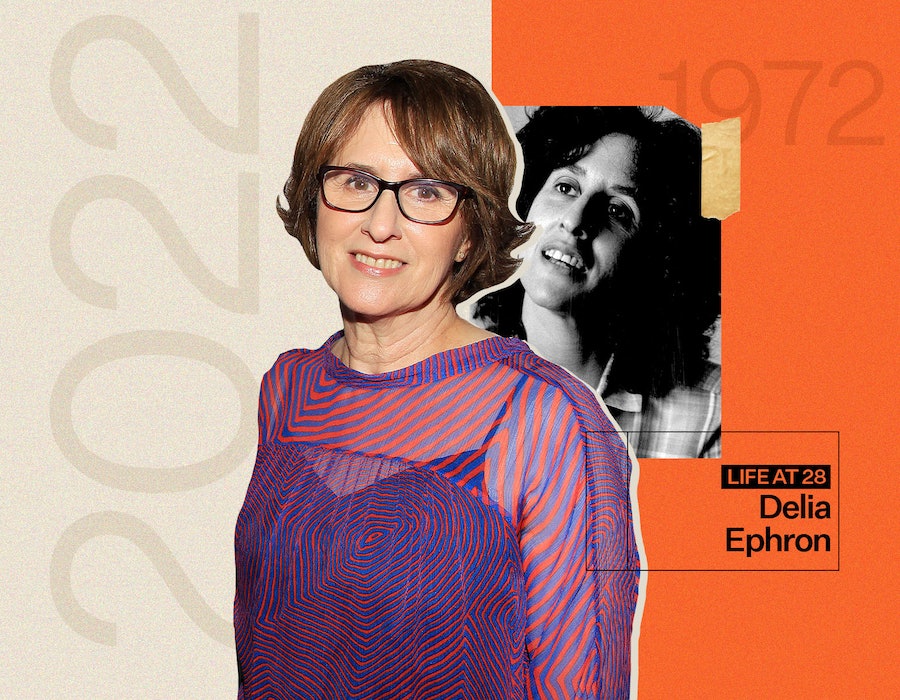 When it comes to her second decade, Delia Ephron doesn’t mince words. “I just blew my 20s,” Ephron tells Bustle. At the time she was living in Providence, Rhode Island, had recently married a professor, and took up crocheting. Or as Ephron puts it, “I was giving an impersonation of a happy person.” This impersonation included throwing dinner parties and religiously watching The Mary Tyler Moore Show and All In The Family. What it didn’t include was any genuine happiness. “It was like, ‘Oh, now I’m a married woman.’ Just buying into things that didn't really have any reality to me. I was avoiding life.”

Ephron carried on the charade for another three years before finally moving to New York to pursue her second act. (No, her first husband did not come with her.) This next chapter was a fruitful one: Ephron fell in love, became a celebrated writer, and collaborated with her sister Nora on films like You’ve Got Mail and Mixed Nuts. But these days the 77-year-old is squarely focused on her just as exciting third act. “Nobody even thinks about their third act. That's part of what is interesting about it, there’s no blueprint,” she explains.

For Ephron, it began with a New York Times op-ed. She’d just lost her second husband to cancer and poured her grief into an essay about shutting down his landline. Ephron expected catharsis, but what she got was another shot at love. A recent widower named Peter, whom she’d gone out on a few dates with 54 years prior, reached out. They reconnected, and soon they were married. “One of the things about falling in love when you're this old is you’re freer in a way and more able to be more devoted to experience the love,” she says. “But death is right there in front of you. You can reach out and touch it. So I have this, but it feels so precious.”

Her third marriage, along with her leukemia diagnosis (she’s currently in remission) is the emotional core of her new memoir, Left on Tenth: A Second Chance at Life. Ephron hopes readers see from the book that even if you screw up your first chapter, your second, or your third, it’s never too late to have your best act yet. “You can blow your 20s and still have a life. I am living proof of that.”

Below, Ephron reflects on getting divorced, eating chocolate pudding, and a fantastic Parisian coat.

I didn’t know what to do with myself in my 20s, so I just got married to the first man who asked me. He taught at Brown and I moved [to Providence] with him when I was 25. Three years later, I had my first book published, which was The Adventurous Crocheter.

I had been crocheting things to sell to department stores with my best friend. Then I was at a party in New York and there was an editor there from Simon & Schuster. I walked up to him and said, "I know you'd never be interested in this, but would you like a book about crocheting?" It's so not the way to present yourself but he said, "Yes, I would be interested." So I wrote this book but didn't think I was a writer, because I was just writing directions. I was just beginning to think, "Hmm. I think I want to be a writer."

Was that something you were actively trying to pursue, or were you more so just beginning to admit it to yourself?

Nora and I were always close. I mean, even as very young kids, she was always bossing me around and telling me everything. This is a perfect Nora story. I had left [my husband] and I was trying to decide if I should go back with him. Nora and I are having lunch and she says, "Do you want to know what I think?" I said, "No." And she said, "I think you should leave him." I mean, there was no way she was going to pay any attention to what I said to her. So she helped me find my apartment [in New York]; she gave me an assignment at Esquire. We were tight, always.

Tell me about escaping to New York.

When I moved to New York I said, "Okay, I have enough money to last one year." I knew I had messed up my 20s so badly that I needed to make a plan. So I said, "In one year, I have to be published in The New York Times and if I don't succeed, I'm going to have to find something else to do.” So it was almost a year and I was down to $500 — which would've been $800, except I fell in love with an orange coat — and I was at home eating chocolate pudding. It was the kind of pudding you cook, so there was a little skin on top, and I was scooping the pudding out from underneath and saving the skin for last. I thought, "I'm eating like a child." I wrote 500 words right then about how children eat food.

I finished it and showed it to Nora and I remember she said, "Oh, this is so great." Then I showed it to Ed Koren, the New Yorker cartoonist, and he took it to The New York Times for me. They published it on the last page of the magazine section and overnight, my life changed. I was offered a book contract on Monday.

Was that the moment you felt you’d truly made it?

I don't think the idea of “making it” is the thing. I think I knew I could have a career as a writer after How to Eat Like a Child came out and was extremely successful. I knew I could have this dream, but I kept setting other goals for myself. I thought, "Okay, this year I have to learn to write an essay. This year, I’ll learn to write a screenplay. This year, I’ll try to write a novel.” I don't mean one year after another, but in the course of the next years, I would set other goals for myself because I knew I wanted keep expanding in a serious way.

Now, let’s hear about splurging on the orange coat.

It was a fantastic Parisian coat. It flared out and it had this small, sharp collar. I think I found it in a store on Madison Avenue, just a small boutique. I remember seeing it in the window and it just looked fabulous. It was so much fun to dress then.

What were you watching, reading, and listening to at the time? What were your influences?

I understood early that your writing is your fingerprint. So if I wanted to be original, I needed to look inside and I've stuck to that in my life. Now, having said that, I think that one of the most influential movies I ever saw was Seven Brides for Seven Brothers, which is a musical. It absolutely doesn’t fit any of the norms of today — but I saw it 16 times and nothing seemed more exciting to me than to be kidnapped by some guy out of my house and taken into the backwoods, where I could be married to a backwoodsman and make flapjacks and biscuits all day. It, of course, didn't suit me in any way, but it certainly must have influenced the fact that I could write romantic comedies.

Get out. When you know you've made a mistake, when someone wants to crush your dreams, you have to get out. You have to ask yourself, "Why did I marry this man?" You have to look at why you made the choices you did and start to make different ones. I think that’s why I ended up with such a happy marriage. I began to look at the men I was dating in a more reasonable way. I didn't just like them because they liked me. That was big thing before my 20s. If he liked me, then I had to like him.

More like this
At 28, Minnie Driver’s Personal Life Was “Falling Apart”
By Kate Dwyer
Watch The Emotional Trailer For Dolly Alderton’s 'Everything I Know About Love'
By Bustle UK
10 Must-Read New Books Out This Week
By K.W. Colyard
Thank U, Ex
By Rosemary Donahue
Get Even More From Bustle — Sign Up For The Newsletter