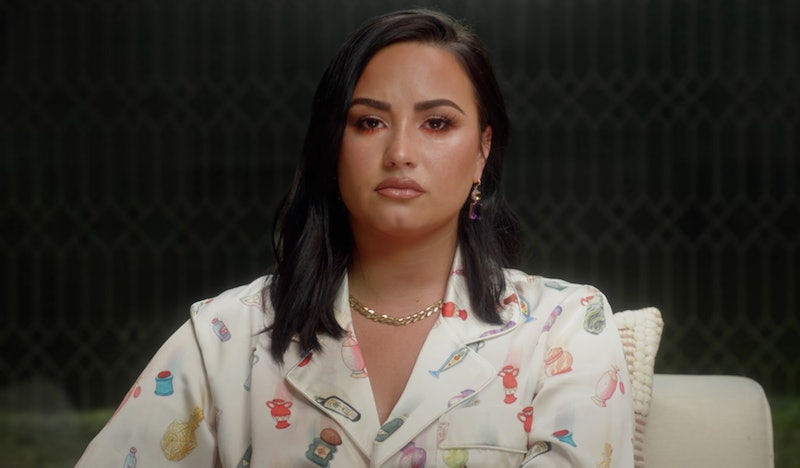 Demi Lovato’s new YouTube docuseries Demi Lovato: Dancing with the Devil not only revisits what led to her relapse and 2018 accidental overdose, but also reveals how Lovato’s recovering today: not by being stone-cold sober, but by drinking and smoking marijuana in moderation. "She very openly says, 'This is where I'm at today. I'm working on myself every day. I'm imperfect, I'm doing my best,'" director Michael D. Ratner told CNN. "You know, she's a human being.”

Lovato had previously spoken about her struggles with sobriety in MTV's 2012 documentary Stay Strong and YouTube's 2017 Simply Complicated. Dancing with the Devil sees the pop singer being even more unfiltered as she explains how her increasing substance misuse, kept secret from her team, culminated in an overdose on the night of July 24, 2018. By the time her assistant found her, Lovato had suffered from a heart attack and multiple strokes that left her partially blind; she later also realized that the man who sold her the substances had sexually assaulted her.

In a March 21 interview with CBS Sunday Morning, Lovato talked about her recovery in the wake of that traumatic event. “I didn’t control any of my life at that period in time,” she explained. The docuseries shows how Lovato was living under intense restrictions, with her team monitoring everything she ate, when she worked out, and who she was able to meet up with. The lack of control made her deeply unhappy, and that only pushed her deeper into her destructive habits. Lovato told CBS that she was only able to gain control of those aspects of her life within the last two years. “I’m now in control of my finances, the food that I eat, and how often I work out,” she said.

But when it comes to her sobriety, the issue is more complex, with Lovato explaining that she considers herself what she calls “California sober,” per CBS. “I really don’t feel comfortable explaining the parameters of my recovery to people,” she admitted. “Because I don’t want anyone to look at my parameters of safety and think that’s what will work for them. Because it might not.” She added that just as she’s “cautious” to say that “the complete abstinent method is a one size fits all solution,” her “journey of moderation” might not work for anyone else but her.

“I haven’t been by-the-book sober since the summer of 2019,” she told The New York Times. “I realized if I don’t allow myself some wiggle room, I go to the hard [expletive]. And that will be the death of me.”

It’s a startlingly honest admission, but in the docuseries, Elton John — who’s been sober for 30 years — says he’s unsure if that method will actually work for Lovato in the long run. “Moderation doesn’t work,” he says. “You either do it, or you don’t.”