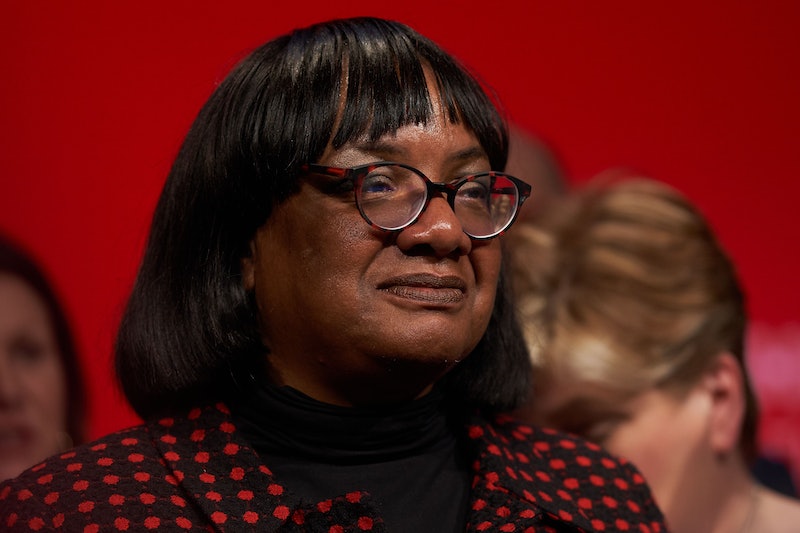 In 1987, Diane Abbott made history by becoming the first Black woman to be elected as an MP in the UK. Since then, she’s been at the heart of British governance and continued to serve as a representative for Hackney North & Stoke Newington. Now it’s been announced that Abbott will detail her journey into politics in a new memoir.

Penguin imprint Viking announced that A Woman Like Me: A Memoir will be released in summer 2022 to mark the 35th anniversary of Abbott’s election to Parliament and will give readers detailed insight into what it’s been like being a Black woman at the top of politics for over three decades.

Abbott takes readers all the way back to growing up in North London with her Jamaican parents, highlighting what inspired her to become a campaigner and politician. She will also talk about her life in the public eye.

Speaking about the book in a statement sent to Bustle UK, Abbott said:

“I am very excited to be working on this memoir with Viking. It is a long-awaited chance to tell my own story, in my own words. My parents were part of the Windrush generation. Nobody could have guessed that their bespectacled little girl would grow up to be a British Member of Parliament. This will be the story of that journey.”

As mentioned, Abbott has been the member of parliament for Hackney North and Stoke Newington for nearly 35 years. She has spent her time in office campaigning for human rights issues, opening up conversations about racism, and shining a light on the abuse experienced by women in the public eye. Abbott herself has faced an unprecedented amount of criticism and trolling during her time as an MP, with Amnesty research from 2017 revealing that she received 45% of all abusive tweets sent to female MPs in the six weeks before election day that year.

Viking has said that, through her memoir, Abbott, “paints a candid portrait of what it’s like to face a barrage of hostility every day, shows us how she was able to battle impostor syndrome, and succeed against the odds, and empowers us with the strength to change the fabric of this country for the better.”

According to The Bookseller, publishers were seriously interested in A Woman Like Me. Viking won publishing rights after a six-way auction. Alpana Sajip from Viking said, “Diane is a titan of British public and political life, and we couldn’t be prouder to be publishing her memoir. She has inspired generations of Britons through her unwavering efforts, and we know that by sharing her story with the world, she will continue to do so.”

Robin Bunce and Samara Linton have previously written a biography about Abbott. Diane Abbott: The Authorised Biography was published in Sept. 2020 and documents Abbott’s monumental rise to the top of politics. However, A Woman Like Me will be the first time Abbott writes about her career and experiences from her own perspective.

A Woman Like Me: A Memoir will be available from summer 2022 in hardback, ebook, and audiobook.