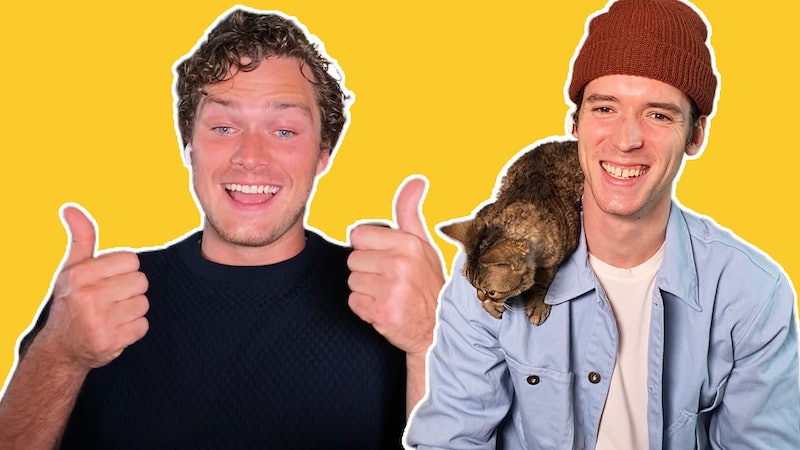 The internet had a lot of questions about Dickinson Season 2, so we asked the season’s bad boys and love interests, Finn Jones (who plays Samuel Bowles) and Pico Alexander (who plays Henry “Ship” Shipley), to answer them all — which maybe wasn’t the best idea.

Channeling their good-looking yet... single-minded characters, Jones and Alexander answered your burning questions about Dickinson with some sincerity, more humor, and just a little bit of apathy. For example, when we (the internet) asked if Dickinson was real, we (the internet) wanted some insight into how much of the show is factually based on Emily Dickinson’s real life (basically, were she and Sue really in love??) and how much is artistic license based off her poems. They took the question as “Is Emily Dickinson real?”; happily said “yes”; and brought their attention quickly back to Alexander’s shoulder-perched cat.

So if you want to know what happens to Emily and Sue, if we’ll see more of Sam and Ship, or if Dickinson is even real, this may or may not be the video to actually answer those questions. But if you want to watch two good-looking guys entertain themselves and each other (with an appearance by a pet cat) — this is exactly the video for you.

More like this
At 28, Rosie Perez Risked Her Career To Stop Playing Stereotypes
By Gabrielle Bondi
At 28, Debra Jo Rupp Was Living A Much Different '70s Show
By Grace Wehniainen
'That '90s Show' Star Callie Haverda Got Advice From Mila Kunis & Ashton Kutcher
By Brad Witter
Brendan Fraser's Emotional Critics Choice Awards Speech Is Total Tearjerker
By El Hunt
Get Even More From Bustle — Sign Up For The Newsletter
From hair trends to relationship advice, our daily newsletter has everything you need to sound like a person who’s on TikTok, even if you aren’t.