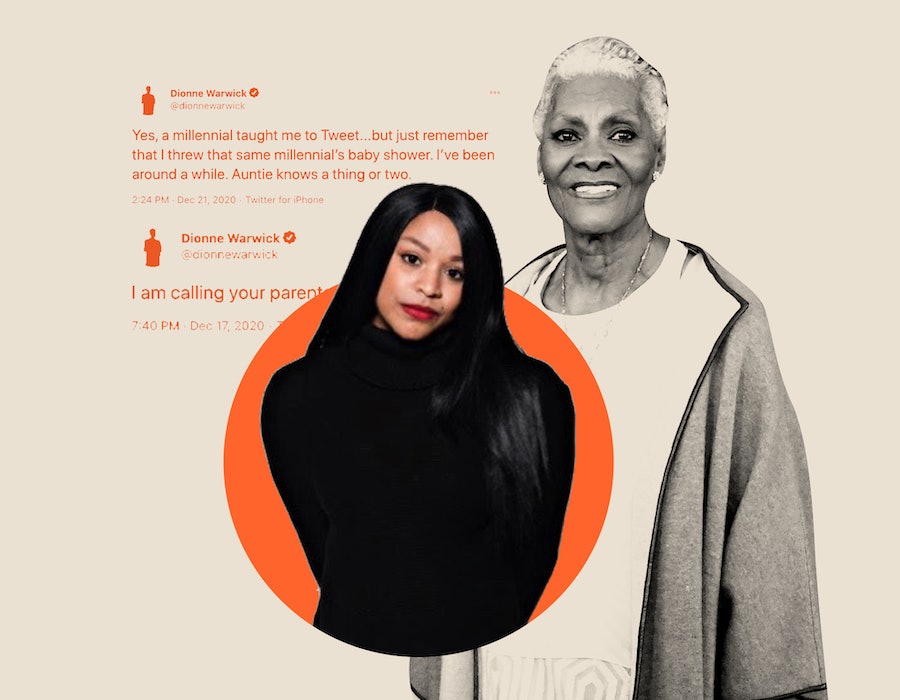 On Dec. 7, Dionne Warwick logged on Twitter to find foolishness in her replies. For weeks, the renowned soul singer's Twitter feed had been alight with responses to her bone-dry tweets, with users alleging that the 80-year-old music legend couldn't possibly be writing them herself. So she recorded a video to quell the naysayers.

"You see, I have a wonderful niece, her name is Brittani," Dionne says in the video, in which a calendar featuring two Pomeranians now infamously hangs in the background. "And she said, 'Aunt Dionne, you’ll have a lot of fun if you get on this with me.' I said, 'OK, teach me how to do it.' And she did, and I am doing it."

To hear Dionne's great-niece Brittani Warrick (who uses her great-aunt's last name from birth, Warrick, as opposed to the singer's stage name) tell it, that's pretty much what happened. The Los Angeles-based 31-year-old is a social media consultant and digital strategist by trade who helps keep Dionne's digital presence fresh. Below, she discusses teaching her great-aunt to "do a tweet," the Twitter thread that stressed her out the most, and what social media platform Dionne should take over next.

You come from an extremely musical extended family with Whitney Houston as a second cousin and Dionne as your great-aunt. What was it like growing up in the music business?

Interesting. I met a lot of people not everybody meets. But as a child you don’t really think about that sort of thing, and then as you get older you’re like, "Oh my gosh, I know Stevie Wonder? That’s weird." It felt normal to me. I always joke around to Aunt Dionne that I don’t know who she is outside of being my aunt. She has all these contributions — she was a Goodwill Ambassador and [supported] AIDS foundations — and I’m like, "Really, she did that?" Because to me she’s just Aunt Dionne. I would go on tour with her just as family [as a child]. She really likes to make sure we all at least travel the world once or twice, which is such a blessing that we get to do that.

How did you get involved with her social media?

As I got older, I decided that I wanted to go into the digital space, and she let me explore those talents and opportunities connected with her. My involvement is pretty much all hands on deck when it comes to digital — I like to have my creative eye on a lot of things that she does to make sure that the messaging is stable and viable — the website, her social channels, her strategy. I even work in tandem with her PR and management.

She has had Twitter since 2012. Usually, I’d just jump on and be like, "Hey, we’re touring here, you can get tickets here" — it was really more of an informational, active social newsletter that she didn’t really have any involvement in until people started asking her questions. [Then] I was like well, I can’t answer this. So then that’s when I [told her], "Let’s sit down and learn this."

Before Covid it was kind of tepid waters, where she was like, "I don’t know about the social media stuff, I trust you, you got it." And I’m like, "No, Aunt Dionne, you have to really dive into this so it looks organic, you have a great personality." I had to convince her: people want to hear from you outside from singing. Because she’s hilarious. We joke that she should have been a comedian.

I took the opportunity around the election time to just jump in, and I walked her through a few things. So I taught her how to search her name [on Twitter], and there was a tweet about who’s counting the votes and it was a video of her from The Apprentice, which I didn’t watch, because she’s just my aunt. And I was like, "You can just say whatever you want [to reply]." And she just said, “Excuse me.” And I was dying. That’s hilarious to me. And it took off from there.

How do you teach her social media remotely, are you on the phone with her?

Oh, all the time. She’ll text me, she’ll call me, she’ll FaceTime me. It’s usually her contacting me telling me she wants to “do a tweet.” In the beginning it was more like, “I want to do a tweet, how do I do this tweet?” Now it’s more like I get on Twitter and am like, “Oh my gosh, what have you done?” I call it the end of day comb through where I’ll log into her account and be like, what happened today? And make sure nothing insane happened. For the most part, it does happen, and I just leave it because it’s hilarious.

What’s something that stressed you out that she tweeted?

I don’t know if you saw this stream of tweets but she was beefing with wrestlers.

Is she a fan of wrestling?

No! [I thought], this is crazy. I’m not even gonna touch it. When you see the tweets that say “DW Team” that’s usually me, I think people know that. Like if I go in and do maintenance and need to let people know something, I’ll make sure they know it’s not her. I was going in to check Ms. Warwick’s tweets [and saw that and was like], “Never mind though.” And I just logged back out. That was insane. She was doing her thing.

What’s something that was really difficult to teach her?

Gifs. Which is hilarious because she’s so good at them now. I have a special way of using socials, especially Twitter, so a lot of the stuff that she does mirrors stuff that I do, because I’m the one that taught her. So I would say that she’s A+ at gifs now. But that was the hardest one, because she was like, “There’s so many, which one do I choose?” Just pick one!

Do you give Dionne ideas or topics to tweet about?

No! Which is hilarious. We’ll have strategy calls, obviously. Sometimes she doesn’t get to all of the replies, because she gets thousands of replies. So at the end of the day I’ll comb through and I’ll pick a few and be like, "Hey, so-and-so asked a great question, you might want to save that and tweet at them later." But she is getting the hang of it to where she asks me ideas and I have to say yes or no.

What’s something that’s been her idea lately?

She really cares about politics, and she really wants to make sure that everybody is treated fairly and equally and with kindness. And she’s been wanting to engage with some people [online], I won’t name them. [And I say], “No ma’am.”

Are you trying to keep her out of controversial territory?

Aunt Dionne is a very giving and kind person and that comes across even if she’s throwing shade, as the people say. People can tell that it’s with love. And I don’t want her to go into a space that she can’t come back from, because the internet is relentless.

And also, I’m protective because she’s my aunt, she’s my family, and I want to make sure she’s having fun. I don’t want her to be attacked. Everybody has feelings, so if we can avoid certain things, of course we will.

Are there any other social media platforms Dionne should take over next with your help?

We’ve been discussing TikTok. I've been studying TikTok because I want to make sure that it makes sense for her. You know, her granddaughter is on TikTok, it’s a very generational vibe. So it might be something we venture into.

More like this
How To Curl Your Hair With Leggings, According To TikTok
By Carolyn Steber
Ashamed Of Your Screen Time Stats? Here's How To Change That
By Alexis Morillo
Learning To Love, Not Judge, The Lunchbox Wives Of TikTok
By Esther Zuckerman
11 Super Bowl Instagram Captions To Use On Game Day — Even If You Don’t Like Sports
By Alexis Morillo
Get Even More From Bustle — Sign Up For The Newsletter
From hair trends to relationship advice, our daily newsletter has everything you need to sound like a person who’s on TikTok, even if you aren’t.