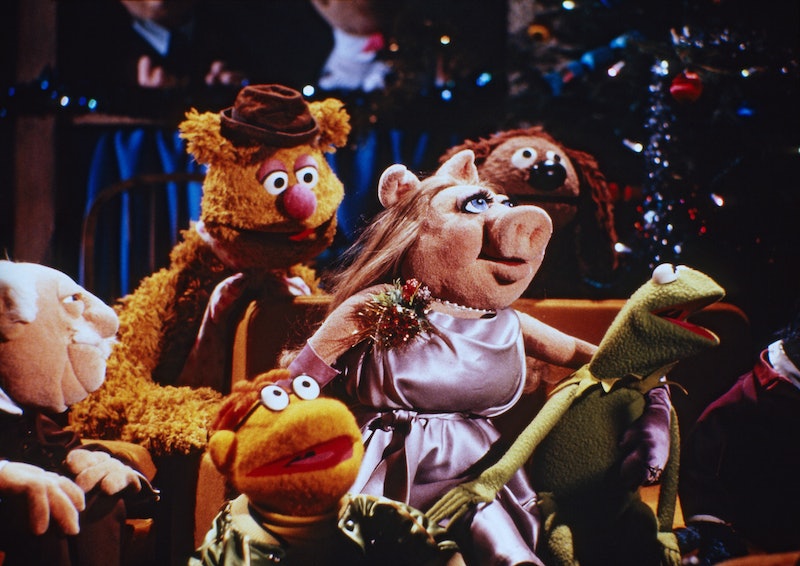 Now that The Muppet Show is streaming on Disney+, fans can relive their favorite moments from Kermit the Frog, Miss Piggy, and the gang — but not without cringing at some outdated material. Disney+ added disclaimers to nearly two dozen episodes of The Muppet Show, warning viewers of "negative depictions" and cultural insensitivity.

The advisory appears for 12 seconds before each flagged episode of the variety show, which ran for five seasons from 1976 to 1981. "This program includes negative depictions and/or mistreatment of people or cultures," the warning reads. "These stereotypes were wrong then and are wrong now. Rather than remove this content, we want to acknowledge its harmful impact, learn from it, and spark conversation to create a more inclusive future together."

One of the episodes flagged by the streaming service sees country singer Johnny Cash singing in front of the U.S. and confederate flags, as reported by CNN. Episodes featuring Joan Baez speaking in an Indian accent and Kenny Rogers showing some Muppets oil-drilling while wearing Arab costumes also include the warning. Though two episodes from Season 5 are missing from the streaming service entirely, this is due to issues with music rights, per Entertainment Weekly.

This is not the first time that Disney+ has attached advisories to certain shows and films. Soon after the streaming service's launch in November 2019, disclaimers were added to some classic Disney films, including Dumbo, The Jungle Book, Lady and the Tramp, and The Aristocats. However, rather than airing before the film itself, these warnings were made in the "details" section of each movie's listing. "This program is presented as originally created," the message states. "It may contain outdated cultural depictions."

All of these warnings are part of Disney's Stories Matter initiative, which aims to promote diversity and inclusion by notifying viewers of negative depictions of cultures, including racial insensitivity, that appear in their catalog, and avoiding the controversial move of altering or ignoring it altogether. "Rather than removing this content, we see an opportunity to spark conversation and open dialogue on history that affects us all," the website reads. "We also want to acknowledge that some communities have been erased or forgotten altogether, and we're committed to giving voice to their stories as well."

More like this
24 Years Ago, 'Friends' Dropped Its Most Underrated Ross & Rachel Episode
By Grace Wehniainen
Netflix Reveals First Look At Wednesday In The 'Addams Family' Spinoff Series
By Bustle Editors
Louisa Harland’s New Show Is A Far Cry From Derry Girls
By Frances Stewart
20 Photos Of The 'Hocus Pocus' Cast Then & Now
By Radhika Menon
Get Even More From Bustle — Sign Up For The Newsletter