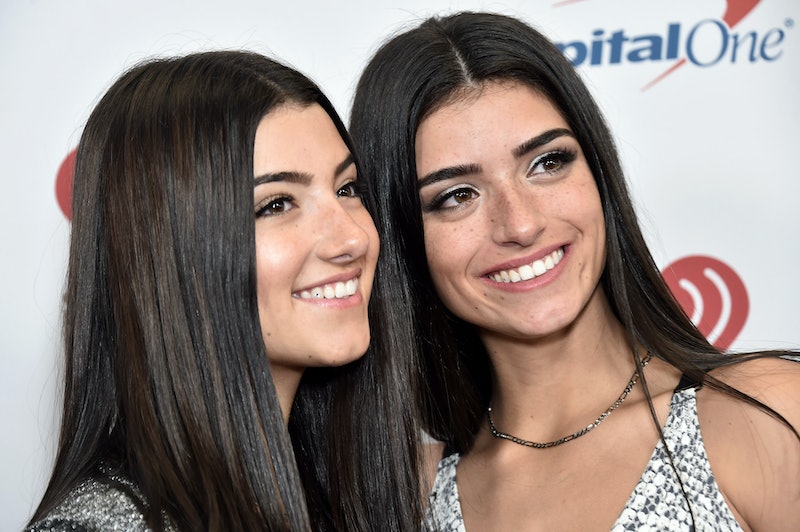 The D'Amelios have come under fire once more. On Saturday, Nov. 21, Dixie D'Amelio apologized for posting a "tone deaf" TikTok video as an attempt to defend her younger sister, Charli, who got called out for her behavior and comments in their recent "Dinner With the D'Amelios" video. Dixie's TikTok was aimed at YouTube star Trisha Paytas, who had joined the online backlash against the famous sisters.

In multiple videos on her own TikTok account, Paytas had called Dixie and Charli "entitled" and "unbecoming" after watching their family dinner video. Dixie evidently took issue with the criticisms, because she responded by posting a since-deleted video recalling a past controversy of Paytas': the YouTuber rapping to NWA's "F*ck the Police" and using the N-word in 2010. Dixie danced to the cover in her TikTok. "I couldn't find the sound for this dance so I chose a random one," Dixie captioned the video, according to Insider. "Hope that's okay!! Anyways let's get back to the RENEGADE!!"

In the comments, Dixie added that she was "didn't want to promote a racist sound" but "I made my point. It's done. It's over. And Charli is a queen. Goodnight." Despite her preemptive defense of herself, the elder D'Amelio sister — who, like Paytas is white — was then criticized by Black social media users and influencers like Jackie Aina, who said she was "trivializing and making a joke out of Black trauma" for the sake of "prov[ing] a point." Paytas also slammed Dixie for the video, writing on Twitter that she recorded the cover "10 years ago and have since apologized numerous times." However, she added that Dixie "danced and smiled to it YESTERDAY!" before asking, "Where's ur apology ?? Not cool in 2020 girl."

Finally, on Nov. 21, D'Amelio apologized for the video in a post on Twitter. "I posted a tiktok with the intention of making a point that didn’t need to be made," the social media star wrote. "I took it down and i sincerely apologize for posting it in the first place and am so thankful for everyone. i’m wishing you all a great weekend and thank you again for the love and support." After one of her followers attempted to defend her in a since-deleted tweet, Dixie emphasized in a follow-up post that "it was dumb and tone deaf" of her to respond with that clip.

Both Dixie and Charli have been at the center of controversy since the first installment of their new YouTube series, Dinner With the D'Amelios, was posted on Nov. 16. In the video, the pair and their parents — along with "mystery guest" James Charles — sat down to a surprise meal cooked by their chef, Aaron May. After the clip was posted, the sisters were called out for displaying "poor manners" at the table, with Dixie gagging and spitting out food and Charli asking to be served "Dino nuggets" instead.

Charli also complained that she hadn't reached 100 million TikTok subscribers in the span of a year, despite having the number one video on the app. (She has since lost over 800,000 subscribers in response to the controversy.) Following the public backlash, Dixie posted a TikTok where she attempted to explain "the full story" behind the video, in which she claimed that her team and the chef intentionally encouraged her to eat the snail as a prank to garner a reaction. "I love Chef, and I would never disrespect him in any way, and maybe don't judge someone's personality over a 15-second video," she said in the clip.

Charli issued an apology of her own on Instagram Live and YouTube, before opening up about the amount of hate she has received as a result of the controversy. "Blatantly disrespecting the fact that I'm a human being is not OK. You can hate on me for whatever I've done but the fact that all of this is happening because of a misunderstanding," she said, through tears. "I just feel like that's not OK."

More like this
Dixie D’Amelio & Noah Beck “Love Each Other” Despite Breakup Rumors
By Julia Emmanuele, Jordyn Tilchen and Grace Wehniainen
Kanye West Apologizes To Kim K "For Any Stress I Have Caused" In Rare Interview
By Jake Viswanath
Confusion Reigns After Kanye Changes His Instagram Profile Pic To Kris Jenner
By Jake Viswanath
The Try Guys Cheating Scandal, Explained
By Grace Wehniainen
Get Even More From Bustle — Sign Up For The Newsletter