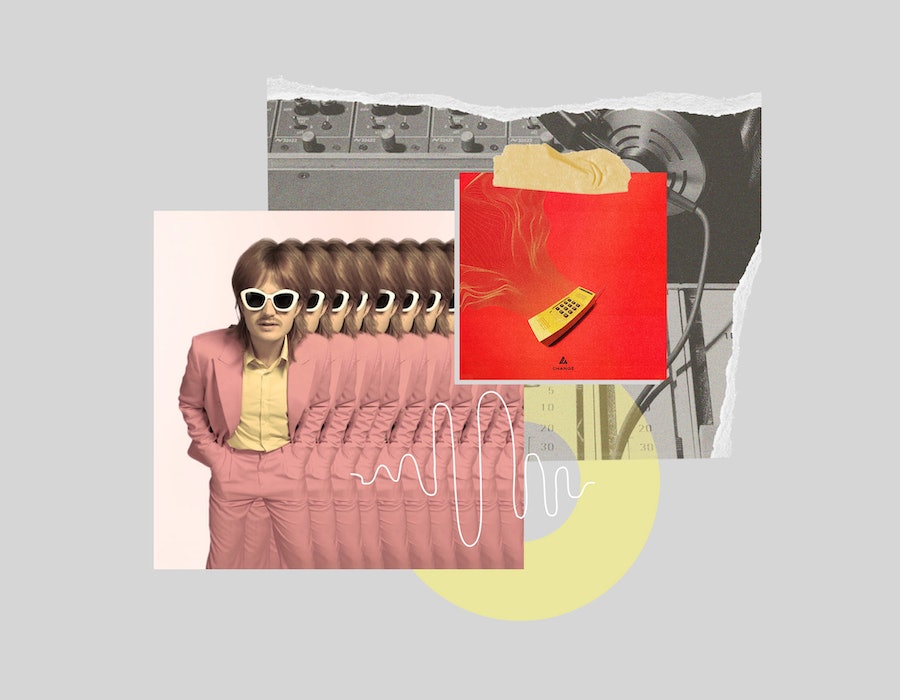 When Joe Keery played his first Lollapalooza set this summer as his wig-wearing musical alter ego Djo, he brought a memento on stage. “My dad gave me this great photo of him on his 30th birthday holding me,” the Stranger Things star tells Bustle at a rooftop bar in downtown Chicago the day after his set. Seeing it taped next to his pedalboard while performing grounded him. “I was playing, looking down, and seeing this little picture. I’ve never allowed myself to be comfortable like that. It was a way to be like, ‘Oh, I feel a little bit more at home.’”

The past six years have been a whirlwind for 30-year-old Keery, whose turn as heartthrob Steve Harrington in Stranger Things made him a literal overnight sensation in 2016. Four seasons in, the Netflix’s series fandom is as rabid as ever: A fan at Keery’s Lollapalooza show carried a poster that read, “Listening to Djo keeps Vecna away,” a reference to Stranger Things’ latest monster.

Unassuming in his tattered shirt and generous with the bear hugs that bookend our conversation, Keery admits that releasing music after initially gaining popularity as an actor in a hit Netflix show is a double-edged sword. “I was pretty insecure about it,” he says over a plate of raw oysters. Though he’d been making music with the band Post Animal since 2014, it was only after he got the Netflix gig that he decided to go solo, releasing his debut album as Djo in 2019 and his sophomore album Decide on Sept. 16. “You want people to listen to the music and have an open mind. But it’s not lost on me that the majority of people are coming because they know of my work on the show and they’re interested to see what it’s all about.”

The pseudonym — pronounced “Joe” — is Keery’s way of distancing himself from the show. Djo’s synth pop track “On And On” describes “the feeling of general doom and gloom and my relationship with social media and the Internet,” says Keery, who escapes Stranger Things madness and online noise by occasionally disabling his social accounts or blasting Djo’s songs in his car. “I like to drive and listen to music, so I’ve listened to this album a lot when I was driving,” he says. Get to know more about Keery's musical influences — including his favorite Beatle — below.

If I’m feeling bold “Kiss From A Rose” [by Seal]. That’s if I feel like I’ve done my vocal warmups. No, I would say maybe something like … what’s that Backstreet Boys song that goes tan tan tanan tanananan?

“Everybody!” I would love to cover that song as a dirty, kinda fuzzy, nasty version.

Who are your musical idols?

Jeff Lynne from ELO [The Electric Light Orchestra] is a massive hero of mine. Todd Terje released an album called It’s Album Time, and it’s a big influence. I’d say those two guys [and] Paul McCartney. Just The Beatles in general. I love all their music. I also have a lot of respect for Mac DeMarco... and I think that, as time goes on, he’s going to be lauded as just a really influential singer and songwriter like Paul Simon.

What’s the weirdest thing you’ve written a song about?

I’ve written some weird-ass songs. “Flash Mountain” was a weird song. That was me being influenced by King Gizzard, Metallica, and White Reaper. That song’s a fun, goofy song. There’s a lot of cheekiness in my music.

What comes first when making music, the melody or the words?

The melody. It’s probably, 99% of the time, melody. I have a word document of turns of phrase that I think are interesting so I’ll steal things from that. But I’d say always the melody.

Maya Hawke, who plays Robin on Stranger Things, is also releasing an album. Did you ever exchange albums for feedback?

We actually switched links recently. She sent me her link and I did the same. So I’m gonna listen to it on the plane ride home. To be honest, we keep that sort of separate. Our influences are pretty different.

On How His Sister Inspired His Favorite Lyric On Decide

The album feels lyrically vulnerable. What song was the most difficult to write?

Maybe “End of Beginning.” It’s a song about saying goodbye to young adulthood. It’s a combination of moving away from something and closing a chapter in your life — one that you kind of wished could go on. A mixed bag of emotions. That’s a really powerful, potent one for me.

What song are you most proud of?

“Go For It” is my favorite on Decide.

What’s a lyric you love the most on Decide?

I really like the line on “End of Beginning,” where I call on my older sister: “Enter Caroline, just trust me you’ll be fine.” That’s a shoutout to her. I had just booked the role on Stranger Things and was really nervous. My sister just got married and I was having a conversation with her before I left to shoot the show and she calmed me down and talked to me. I had a really nice memory of talking to her right before leaving.

I read in an interview that your love for music was inspired by your parents’ musical influences.

Yeah, they have really good musical tastes. Neither of them are musicians, but both are very supportive and music lovers. You know, to be honest with you, I saw School Of Rock and was like, “This is the greatest.” I saw that and was like, “I wanna do that, I can do that.” The thing that I really love about it is the recording process. When I started figuring out I can create songs by myself, I didn’t need to jam with a group, necessarily. I could construct things from the bottom to the top, and laying a drum part, a guitar part, and a bass part. That gives me so much joy. That’s really when it started getting more serious and more about the songs rather than just jamming.

Have your parents listened to the album yet?

My dad has listened to it more than anyone. My parents are amazing. Any success that I’ve had or any luck all goes back to lessons they instilled in me at a really young age and I just owe them everything. I love my parents. They’re very happy. They were watching the Hulu stream [of my Lollapalooza performance]. My dad was checking it out, texting me.

Some of your co-stars like Joseph Quinn and Gaten Matarazzo have performed on Stranger Things. Has there ever been a conversation about you performing?

Oh, that’s above my pay grade.

Would you want to do that?

We don’t really have any say. I mean, obviously the Duffers are super receptive to ideas, but they’re the brainchild behind that. We just perform what they want, pretty much, because they’re the geniuses.

Would you want a role in the future where you get to perform? Maybe your own School Of Rock?

Oh my gosh. One day, I would love to just talk to Jack Black and Mike White and just say, “Hey, I hope you understand just what a positive influence that work of art has had on so many people.” There’s something to be said about art that brings joy. A lot of musicians that we glorify are really tortured musicians, and that’s a really beautiful thing if people are using music to get through pain and express parts of themselves. I do that sometimes. But I’ve also recently just really come to enjoy art that comes from a place of joy and openness and love. And that’s what that movie is all about.

That’s why I love Paul McCartney so much. He seems like a very happy person who enjoys his life. That’s really what I would like to be, what I aspire to. It seems to me like every time he’s performing, he loves it. He’s the perfect combination of art and commerce. He’s able to write these songs that tap into people’s core emotions, and artistically it’s so fulfilling to listen to. But then it’s also for the masses. It’s for everybody to enjoy, and that is such a hard line to ride.

More like this
At 28, Prue Leith Was In A Secret Affair & Sharing Apple Pie With Stoned Neighbors
By Grace Wehniainen
Marcus Mumford, Open Book
By Ilana Kaplan
The 'Love, Lizzo' Harry Styles Scene Is Just 1 Moment That Made Fans Feel Seen
By Brad Witter
Mariah Carey Is "So Proud" After Her Kids Joined Her In The Thanksgiving Day Parade
By Stephanie Topacio Long
Get Even More From Bustle — Sign Up For The Newsletter