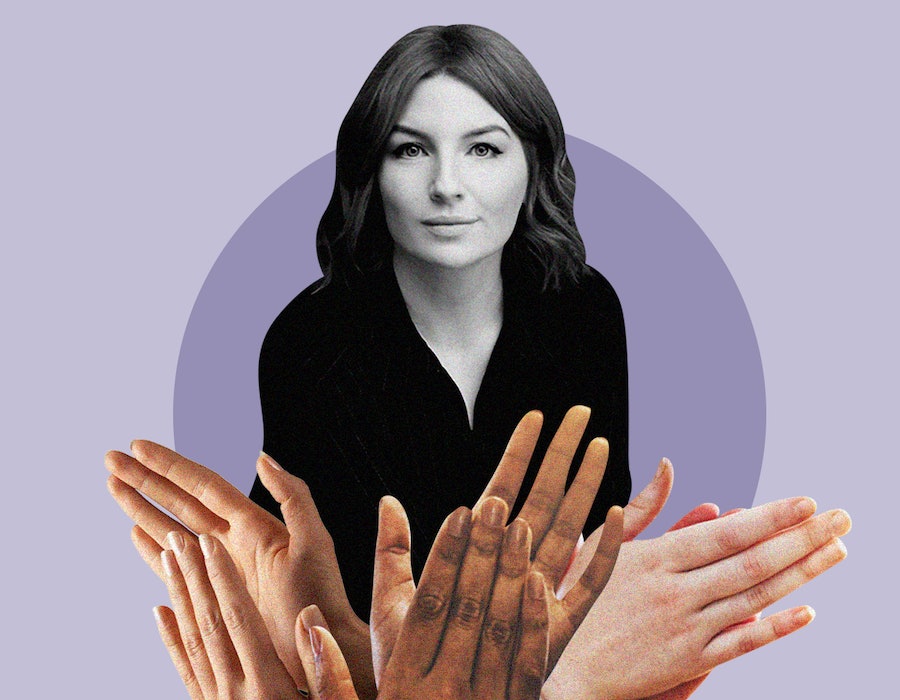 Welcome to Do It For The Applause, a series in which we ask performers, writers, business leaders, and public figures to think about the notion of applause and what it means to them. Today, we hear from TV, radio, and podcast host Alice Levine.

I catch up with Levine in New York, where she's taking a few days holiday before the tour kicks off. She’s already completed the usual tourist spots on previous trips, so now she can focus on the important stuff. “This time, I feel like I can just eat, which is my preferred status,” she tells me.

Despite gaining international acclaim, Levine’s career reads like a very British success story. Starting on Big Brother’s Bit on the Side, the 33-year-old has since appeared on panel shows such as 8 Out of 10 Cats, hosted backstage coverage at the BRITs and, captained and co-captained several BBC Radio 1 shows. When I ask about her proudest achievement to date, however, she circles back to My Dad Wrote A Porno. “Without sounding too corporate and cheesy, it’s got fingerprints all over it,” Levine explains. “[James, Jamie, and I] saw something in it. I think, so often, it's easy to just talk about making something – we made something, and we stuck at it. We're five years deep now.”

While Nottinghamshire-born Levine has done a lot of solo work, including Channel 4 documentary Sleeping with the Far Right, she is definitely a fan of collaboration. She ran a supper club a few years back with fellow presenter Laura Jackson, and currently heads up the weekend afternoon Radio 1 show with Dev Griffin. Does she mind sharing the spotlight?

“I think I find it easier to share,” she says, referencing her aversion to any kind of direct praise (something we’ll hear more about later). But there’s more to it than that. “There is something quite nice about sharing the spotlight,” Levine continues, “because in all of those collaborations I think most, if not all, of them work because there’s a sort of chalk-and-cheese element. [My co-hosts and I are] really different in the way that we do things, and that's why the combinations are successful.”

Even though she’s a self-confessed “control freak”, Levine likes knowing that a success “is more than the sum of its parts”. She explains that “the dynamic doesn't work when you feel that you're not contributing, or that the other person's not contributing. In all of [my partnerships] I think I've got the right amount of gratitude that these people want to work with me, and pride that I'm doing my bit.”

When it comes to any of the things I do for work, it’s the people that I make the shows with. So James and Jamie laughing is the most important thing in the room, because when we made that first episode, that was our only barometer. Nobody had heard it, so we just had to rely on whether we thought it was funny. And that's as arbitrary and as subjective as anything. So it's great if somebody laughs [while listening to the podcast] on their commute, but we have to have some internal test, and I suppose that's each other. And that's true on the radio show, too. If you get an audible laugh out of Dev, that's very satisfying. But he's actually a silent laugher, which is devastating on radio [laughs].

What form do you like your applause to come in? Double taps, five star reviews, standing ovations, or texts from your nearest and dearest?

Well, I don't know about you, but nearest and dearest always feels like… you sort of dismiss it. It's terrible, but you're like, "OK, you’re my mum, you have to say that." So, as lovely as that is – and I'd probably miss it if it wasn't there – I'm going to say, a standing ovation's nice. That's a bit goosebumpy, a standing ovation.

I like a drive-by compliment, because I'm a bit of a blusher, so I don't really like to linger on it too much. I like people to drop the compliment bomb and run away. The comp and go. Or even, with work, people that don't compliment very often – those compliments mean a lot. A text from a producer I work with, or somebody I work with that I don't hear from very often, or somebody that is a tough cookie.

The sandwich one that people do is pretty bad. Is it called a shit sandwich? So, the compliments on either side of [the criticism] are essentially just dry old bread that counts for nothing. You're like, "Well, why did you even bother with those?" I'd rather just straight criticism.

Why do you think many of us find it difficult to accept praise?

I think I'm definitely somebody who responds to the carrot, not the stick. I really do love praise and encouragement. Because I'm such a swot, and I was such a goody two shoes at school, I feel like somebody will say, "You did a good job on that" and for six months I'd be beaming. But, I don't know why it's uncomfortable in the moment. Maybe because it's enjoyable, so it's sort of an embarrassment that you actually quite like it? Or that it's not a very attractive trait to bask in it? I suppose there's a bit of us that feels like, "I don't want other people to think that I'm enjoying it too much." That is what makes me blush and feel uncomfortable, if I dig down into the psychology of it.

Who do you think deserves applause in your industry right now?

Tash Demetriou. It's not that she doesn't get booked, because the past couple of years I've seen her in loads of great stuff. It’s more that I selfishly would like to see her everywhere, because I just think she's so funny. I’d watch her on every channel.