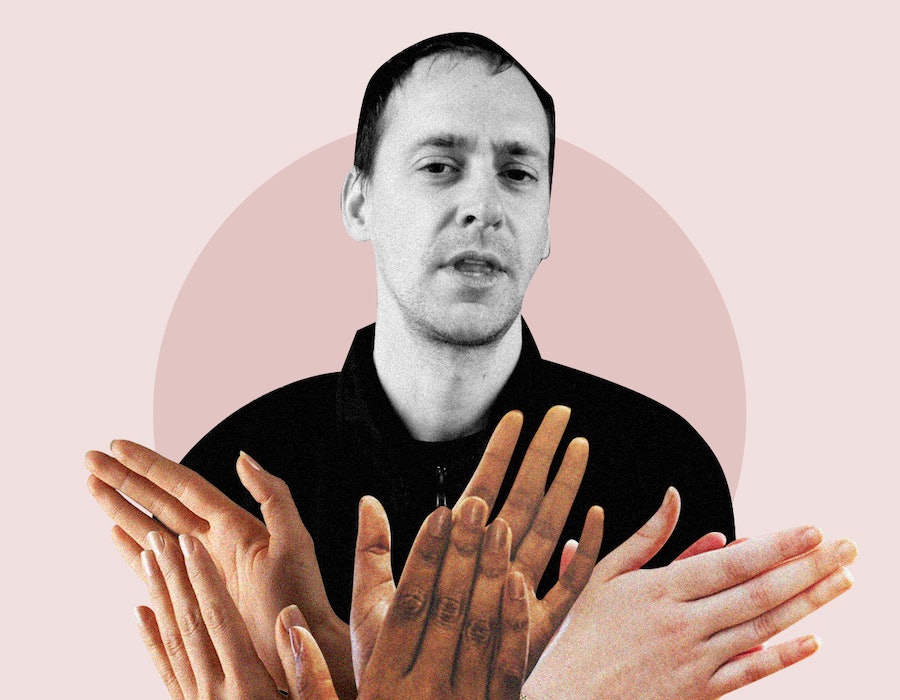 Paul Taylor
Do It For The Applause

Welcome to Do It For The Applause, a series in which we ask performers, writers, business leaders, and public figures to think about the notion of applause and what it means to them. Today, we hear from comedian, writer, and actor Alistair Green.

Interviewing Alistair Green via Zoom is a strange experience. When we log on, he’s sitting in front of the plain white wall that acts as a backdrop to almost all of his viral sketches. I feel like I’ve been transported inside the Indian restaurant where Julie picks up her paratha and dahl or the pub where the inquisitive man is “just saying, OK?”

I start by talking about the white wall. It’s been the same since Green began posting videos online almost three years ago. Does he ever think about changing it? Perhaps hanging a mirror? A picture or two?

Well, no, actually. “I really believe in discarding stuff,” he says, explaining his philosophy on existing with only “the minimum amount of things” he needs. “In the end, ideally, I'd like to reduce [this room] to a sofa and a TV,” Green says. From there, we begin talking about Japanese minimalism, the mental health benefits of clearing out your space, and, finally, our obsession with owning stuff, which Green thinks we may have inherited from Britain’s post-war generation.

This kind of thing happens a lot with Green: seemingly simple questions open up into expansive discussions that can touch on anything from Patrick Caulfield’s oeuvre to a chat about where MPs like go for their weekly curry night (it’s the Kennington Tandoori, in case you’re interested).

You’ll see this reflected in his work, too, if you’re paying close enough attention. On the surface, Green’s sketches (which “start with one phrase” and can take anything from five seconds to a few weeks to develop) are funny and scarily accurate, but also transient. How could they not be? Not only does Twitter limit creators to two minutes and 20 seconds, it also places their work on a never-ending conveyor belt of content ready to suck people into the next news update or meme of Bernie Sanders wearing mittens.

But actually, if you take a moment to look at the sketches as a collection (as some fans have been lucky enough to do during screenings at the Prince Charles theatre), you’ll see Green is (intentionally or otherwise) painting a picture of modern Britain through his character work, where every word, look, and breath is intentional. Plus, there are his more ‘serious’ sketches, like The End of Summer and Beef. Though these videos often fall short of viral fame, the reaction to them is far more impactful, with some viewers even saying they were brought to tears.

Speaking to Green, it’s clear that these kinds of reactions mean the most to him. While he’s very thankful that a lot of his videos get hundreds of thousands of likes, comments, and shares, he also jokes that, if a sketch is appealing to that many people, “there must be something wrong with it.” Below, we talk more about the responses he enjoys most and how else he measures the value of his work.

I think the people who appreciate the small things, the minute things I'm doing. When someone notices I'm doing it in a single take or says, "Actually, that [specific part was] really good," as opposed to someone just going, "Ha-ha." And also my contemporaries, or people that I like. If they like what I'm doing, I go, "OK, good."

What form do you like your applause to come in? Double taps, five-star reviews, standing ovations, or texts from your nearest & dearest?

Not necessarily double taps – likes – because, as I said, it doesn't necessarily mean it's the best thing you've done. Often it's just ridden the crest of a wave of public discourse around a certain subject.

Maybe it’s texts. If someone messages me going, "That last one you did is really good." Although, to be honest with you, none of that has much impact on me. I'm so dead inside that I just go, "Eh, yeah."

I know this sounds like a cliché, but, if I'm pleased with something, I go, "Yeah, I'm happy with that. I think that's good." I don't necessarily need the [other stuff]. I mean, it annoys me when people say comedy is an "art form" and all that. I go, "Oh, shut up. It's not an art form. You're mucking about." Ultimately, I'm filming stuff on my phone in my front room, so that's the be-all and end-all of it, but I do think what I'm doing is good.

As I said, it's when people have noticed the work that I've put in or they've noticed the thing I want them to notice. And I like it when people say, "that was too real." If it affects someone in that way. With my really awful characters, if people go, "Ugh, that made my skin crawl," I'm like, "OK, good."

Someone who quote tweets me and goes, "This guy, this is worth watching." Worth watching? Fucking hell. "Seen Mona Lisa? That's worth a look."

Then there’s the worst type of compliment ... when people say, "Hey, I love what you're doing here, but what about if you did this?" I really don't believe in constructive criticism [laughs]. So, if someone says, "What about if you did it like that?" I go, "No, because I've obviously thought about that. You're not the editor. I've done all that for you. Just enjoy it."

This is the hardest question. I don't really know the answer to that other than, I think, maybe it's the pressure of, "Oh, sh*t, how am I going to do that, again?" There's a part of your brain that goes, "Well, it's not always going to be great. Lower your expectations. I can't deal with this." But really, what I try to tell myself is, ordinarily, most people don't care what you're doing. Most people have got their own problems. They don't care. They'll spend two minutes watching or reading something you've done and go, "Oh, that's great, yeah." They they’ll move on. They'll go buy a coffee or whatever.

Which person in your industry do you think deserves applause right now?

Meg Stalter. She's the funniest person because she does something different every time, which I try to do too. And, with Meg, it will be very subtle, the differences. And also she'll improvise a lot in videos, which is very rare. There's that feel of it's free and easy. I like that, and, often, she'll do single takes, as well.

And also, anyone who isn’t white and male. It's sort of a tragedy that it's still the case in England that mainstream comedy is very white-male dominated. I think there is something about TV, it’s a very pally kind of thing where the commissioners will get their mates in. It's very uncomfortable. Other comics deserve to have those opportunities that are just not afforded to them.

More like this
Darren Harriott Is Keeping His Love Life Away From The Spotlight
By Darshita Goyal
You’ve Got 'Love Island’s Farmer Will All Wrong
By Jack Orenstein
'Bridgerton's Regé-Jean Page Is The World’s Most Handsome Man
By Darshita Goyal
Turns Out George Clooney Is A Huge Fan Of This Classic British Game Show
By El Hunt
Get The Very Best Of Bustle/UK
Sign up for Bustle UK's twice-weekly newsletter, featuring the latest must-watch TV, moving personal stories, and expert advice on the hottest viral buys.