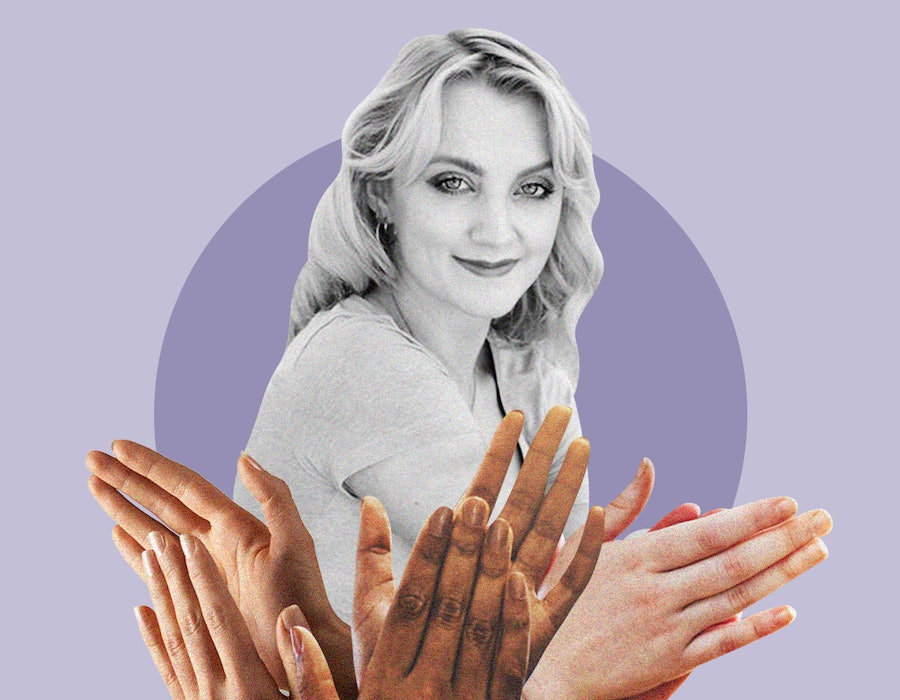 Welcome to Do It For The Applause, a series in which we ask performers, writers, business leaders, and public figures to think about the notion of applause and what it means to them. Today, we hear from actor and vegan activist Evanna Lynch.

Having a plant-based diet at Hogwarts would be almost impossible, according to Evanna Lynch. "I mean you’ve read the books," she says. "The descriptions of the food don’t sound very vegan." Lynch is something of an expert on both counts, thanks to her role as Luna Lovegood in the Harry Potter films and, since then, her vegan and animal rights activism.

So, does Lynch think Luna would be a vegan? "I definitely think she would be a vegetarian because I think she has such a kinship with animals," the actor says. "Luna’s very spiritual. She relates to people and animals I imagine just on a deeper level than words. People are prejudiced against animals because they're different and they don't communicate in the same way that we do. I think, to a lesser extent, people are prejudiced against Luna in the same way. She's bullied for being different. And I really think she would feel that affinity."

Lynch became a vegan in 2015 after years of vegetarianism. Since making the change, she’s used her platform to spread the word about the joy and importance of plant-based diets. Her social media is awash with posts about the movement, and in 2018 she co-founded a vegan, clean, and cruelty-free beauty line, Kinder Beauty Box. She has worked with a number of animal rights organisations including PETA and MFA. For all her hard work in this space, and for using the internet as a megaphone to promote vegan causes, Lynch has just been given the Special Achievement Award at the Lovie Awards.

Of all her achievements, however, it’s her podcast Chickpeeps that she’s most proud of. Each 60-minute episode features Lynch and her three co-hosts — activist Momoko Hill, actor Robbie Jarvis, and animal rights expert Tylor Starr — discussing the vegan lifestyle. "I'm really proud of the podcast because that's something we started from scratch. Nobody was really telling us to do it. There was no pressure to start it. It was like gut instinct. And we got to create everything. What the vibe would be like, who would be involved, what the talent would be."

"Am I ever going to be able to do anything that will top that or am I always going to live in the shadow of my 14-year-old self?"

It's a vastly different set up to Harry Potter, where Lynch got her break as a child actress. "We do end up seeing each other quite a lot, especially at conventions," she tells me of her continuing relationship with many cast members. "And I'm really close friends with Scarlett Byrne [who played Pansy Parkinson] and Katie Leung [Cho Chang]. We were just planning we're going to a New Year's party together. So we were planning our outfits."

She continues: "I think a lot of us have bonded more since the films. Just because we're older and we're adults now. Say, for example, I hung out with the twins this weekend, James and Oliver. And I didn't talk to them much on the films because when you're 14 and whatever, they're 18 or 19, it seems like such a giant age gap. When you're adults it doesn't seem that much."

"I tell [my therapist] all the time, 'If I didn't have you, I'd have a crappy boyfriend.'"

Their bond today revolves around their "unique position" of having "started off with something so high profile" in their career. She continues: "None of us had much acting experience or much experience of working in the entertainment industry. I've done so many courses and acting classes [since the films] and nobody else can really understand what position I'm in except the Potter gang. So whenever I see them, I feel like, 'Oh, you get it.'"

This early exposure to fame somewhat warped Lynch's understanding of adoration and applause. "I struggled to find a sense of self worth after the films," she says, "because it was like, ‘Oh wow, I had my huge break at 14. Am I ever going to be able to do anything that will top that or am I always going to live in the shadow of my 14-year-old self?’"

Explaining more about life post Potter, she says: "[When] the films ended, I genuinely, at first, I really struggled to get work. It was just weird because we were getting all this fan mail and all this attention. But I found in the real world that wasn't reflected. And it was hard. I think for a while I really missed the validation of being in a giant film series where anything you did was just admired and gushed over."

Lynch says it's something she still struggles with, but it helps that she feels a huge sense of fulfilment from the work she's doing now. "It's on a much smaller scale," she says, "but I've put my heart and soul into it."

My therapist. She's like a spiritual teacher therapist. I just feel like because I'm so honest and raw with her and she is the person I go to at my ugliest, when I just feel so powerless and helpless and sad. And she's never like, "Oh, you’ve got this big deal,” or, "Oh, you got this award." She messages me when I do an Instagram story and says, "I saw your true self there. I feel like you were really being yourself." That praise means the most to me because I know she sees my soul. She sees my depth. And that's what I'm always striving for. I'm always striving to be my truest self in the world. We worked really intensely together when I was doing Dancing With the Stars [Lynch took part in the show in 2018] because that was where I really had to learn how to overcome my negative mindset. I was always thinking about what would I do if I flipped over or if I messed up. And she really guided me through that to visualise success. That was a big turning point for me and since then I've been working with her steadily. I tell her all the time, "If I didn't have you, I'd have a crappy boyfriend." Because I would be so lonely and would need the praise.

Definitely texts. It's so nice when people do that. And my mom is really good about doing that. If I've done something or written an interview, she'll send me the longest text. And she puts so many emojis and they're just the cutest parent thing. Yeah. I love that.

I really like when people say, "Oh, you make me feel good." I get that sometimes. Somebody said that to me the other day on Instagram. "Your posts always make me happy," or, "Your posts make me calm. You help me deal with my anxiety." And I was just that's the nicest thing because I try really hard to only put positive stuff out there. And of course I like when people compliment my cat.

Well, the reverse is also true. I'm really polite and nice and I know how to manage my emotions except when people take shots at my cat. If somebody tells me she's overweight or give me shit for the little haircut she has. I just cannot deal with that. I've had to delete comments because sometimes I will get mean.

I also hate compliments where people compare you to someone else — or even to your past self — to compliment your work. Like when they say to me, "Oh you're my favourite Harry Potter star,” and then trash one of my friends [in the cast], it's just like, that doesn't make me feel good because I don't agree with you.

I think it's so hard because it means that we have to accept ourselves. I'm definitely that way. Like when someone says, "Oh, it's really great," or, "You look really pretty," my mind goes, "No, I'm not done. I have to do this and this and this. And then I'll be that." I always think there's more to do for me to be perfect. But that’s ego. It's like saying, "I won't accept I'm not perfect." I actually think it's a kind of arrogance to not accept compliments. To think that you can be perfect at everything all the time. I'm sorry. We're humans. We're not perfect.

I would say Cat Marnell. She’s a brilliant writer. She wrote this incredible book called How To Murder Your Life. It's her memoir. She's just so honest. She’s not talking about anything in a falsely positive way. She's so truthful. And her writing's really funny and really good. And then also Nikki Glaser, she's a comedian, a vegan. I interviewed her last week and she's just so funny and so brilliant and, again, truthful. She has an amazing special out on Netflix. She's very big in America, but the UK hasn't really caught onto her yet and I want them to.

More like this
Jemima Khan Used Her Own Life As Inspo For 'What’s Love Got To Do With It?'
By Darshita Goyal
'Bridgerton's Regé-Jean Page Is The World’s Most Handsome Man
By Darshita Goyal
Gerard Butler Insisted On Adding This Pivotal Scene To 'Plane'
By Catharina Cheung
'Abbott Elementary' Fans Probably Missed This 'Parent Trap' Easter Egg
By Sam Ramsden
Get The Very Best Of Bustle/UK
Sign up for Bustle UK's twice-weekly newsletter, featuring the latest must-watch TV, moving personal stories, and expert advice on the hottest viral buys.