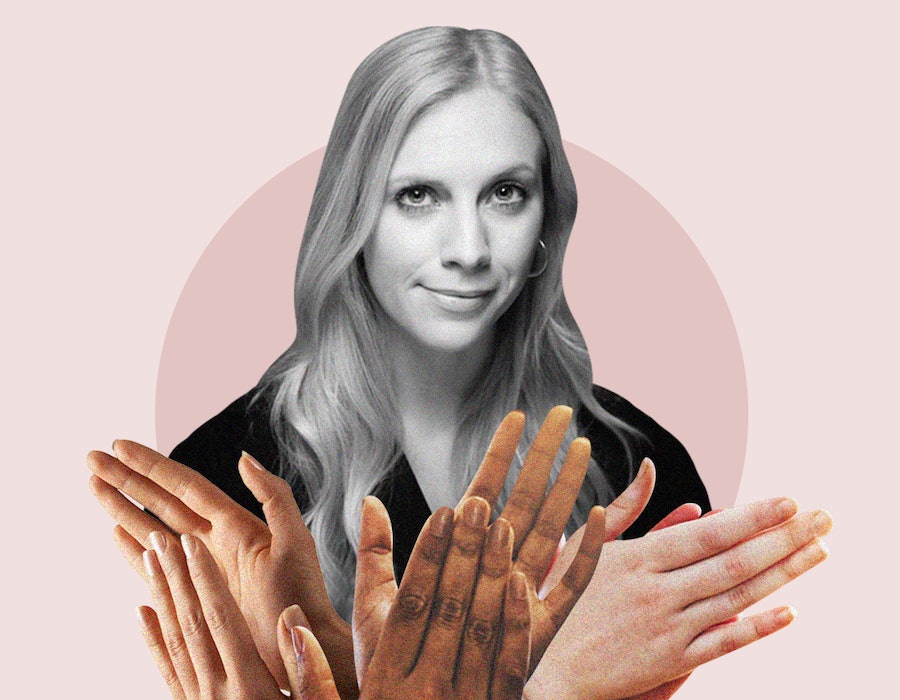 Welcome to Do It For The Applause, a series in which we ask performers, writers, business leaders, and public figures to think about the notion of applause and what it means to them. Today, we hear from set and costume designer Holly Pigott.

The chair used in the Fleabag stage show is better travelled than many people are. Korea, Australia, North America — it's been flown to all sorts of far-flung locations that most can only dream of visiting. To the untrained eye, the jet-setting chair doesn't amount to much; imagine a low bar stool with a red seat and backrest. But to Holly Pigott, who's been Fleabag's stage show set designer since its inception, it represents weeks of discussions and meticulous planning.

"We arrived at the chair because Phoebe [Waller-Bridge, the star of Fleabag on stage and screen] wanted to be seated," Pigott explains. "We decided on a high chair because she wanted to be raised off the ground, and it changed the way in which Phoebe, kind of, held her body in a posture."

What about the choice of colour? "The play is book-ended by a job interview, and loosely set in an office waiting room," Pigott tells me, which is why she went for a rather dingy red material with a carpet to match.

Although it may seem that the art of set design is about building a world for the actors to exist in, when it came to Fleabag, the challenge for Pigott was about stripping things away. "We all had to really hold back because we realised it's very much about the words. Phoebe was quite sensitive to the fact that the show shouldn't appear as a play, necessarily. It wasn't going to be stand-up, but it wasn't straight theatre. So anything too theatrical, or that was too specific on a location, wouldn't necessarily work," Pigott explains. "So it ended up with literally us all just sitting there saying, 'Could it be this? Could it be this? Could it be that?' And it got to the point where I just really noticed that Phoebe wasn't... it just seemed that she didn't really want anything. Everything we came up with, we'd all discuss 'Why, why do we need that?' And the answer was always that we didn't.

Pigott tells me this process of elimination is pretty common in her line of work. "What we do as designers is almost offer the biggest thing it could possibly be and then cut it down until you can get to the bare bones of what's really needed for the production," she says.

The designer's impressive portfolio features a great number plays , operas, promotional films, and music videos, where she has worked on both set and costume design. She studied theatre design at the Royal Welsh College of Music and Drama in Cardiff, graduating in 2011. Fleabag first came into her life in 2013 via an email from an old friend, Francesca Moody, who went on to produce the stage show. "Her email said, 'We're doing this tiny little thing with a friend of mine, Phoebe, and we don't really know what it's going to be at the moment.' She sent me a couple of pages of the script that Phoebe had written and, I mean, nobody knew what it was going to turn into."

Watching Fleabag transform into the phenomenon it is today was a "surreal" process, Pigott tells me. She remembers cramming four people into a pokey two-bed flat in Edinburgh when the show went up for its 2013 Fringe performance (a performance that, in the time since, has reached near-mythological status). Now it's sold out theatres across the world, been adapted into a wildly popular BBC Three series, and shot Waller-Bridge to international stardom.

So, is working with the mind behind Killing Eve really as wonderful as it sounds? Yes, Pigott tells me, "she's an absolute delight." The designer explains how "honoured" she felt when Waller-Bridge asked the original team to come back and work on Fleabag's final ever at Wyndham's Theatre in the West End during the summer of 2019. "When I started working on it, it came from this really small thing, and Phoebe wasn't known then as she is today," Pigott says. "Then there was this kind of huge gap in the middle where Fleabag was continuing, but I wasn't necessarily involved directly, because my work was done. So it was really interesting coming back into that environment in July, when we were preparing for the Wyndham's run, and thinking, 'This is all going to be totally different now because she's so famous.' And it was the same. She's just the same person that she always was. She's really, really sweet. She remembers everyone. It was a really lovely experience working with her again."

As a set and costume designer, it must be hard to know how well you're doing, even when you're working on a show as monumental as Fleabag. I ask Pigott how she measures her success and whether she ever feels she's missing out on getting her bow onstage in comparison to the actors she works with?

"Interestingly, in opera, there's this tradition for the creative team to actually bow onstage. It just happens on the opening night, and it's only in opera, not theatre," she explains. "I mean, I do get a bit of a kick out of it. I think it's a really nice thing, and I think it's really important for audiences just to be able to put faces to all of that work that is there onstage, and looked at as much as any singer or performer, and maybe not always acknowledged. So I think it's quite a special part of the opera world, I would say." But Pigott adds that she'd really rather her applause came in smaller, more subtle, ways. "I just really enjoy having conversations with people who have been to see my work. And it's often other creatives in my industry. I think, so often, we're working to really limited budgets, or tight timescales, and they're the people who can acknowledge all of those external factors and can kind of look at the work for what it truly is. I think that's always a really lovely thing, to be praised by your peers," she says. "As I said before, bowing on stage can be a really special thing, but it doesn't come around that often, and it's not particularly meaningful. It's just a nice kind of add on."

Definitely people within my industry; other set designers, directors, lighting designers. People I work with, or will work with someday. People that understand the ins and outs of what you do. That is probably what means the most.

I like when people give compliments in person or via a text or an email. Being told directly by someone that they admire your work, or complimenting you on a particular project, just because it's not something that they have to do. They're going out of their way to compliment you, and there's a nice authenticity in that. I think particularly because of our relationship with social media, we're often lulled into this false sense of security that we're in touch with a lot of people and are appreciating other people's work from afar but actually I often think about the fact that I'm not always telling people that I've looked at this thing that they've done. So going out of your way to send a message, or to go up to them at a press night party, or outside the theatre, is really special. And I always try to remember to do that more for other people.

I like compliments based on how I work. I think because I don't feel like I always understand myself and because I work very closely with people, and they're often quite quick, intense relationships. I often describe my work to people as I'm starting a new job every couple of months. And you never really have the time to really invest in a relationship and get to know people, so you just sort of go straight in there and you just have to get on. I often, for example, get told that I am very, very calm and grounded in moments of high stress. I particularly enjoy that because I feel like 90% of those times, a volcano is about to erupt inside myself. But I don't always know what I'm projecting in those moments of crisis. So that's always something that I find funny, but I enjoy hearing because I always hope that I'm that way.

Probably similarly to everyone, I find it difficult taking compliments on my appearance, just because I genuinely never know what to say back. It never feels like a conversation starter. And I'm always the person to say, "Oh, this old thing, I found it in a bin." [Laughs]. I always play everything down. But I am trying to be better at just saying thank you, and accepting it, because I feel like that's the right thing to do. No one's being malicious by telling you these things.

It's comparison, isn't it? I think we're living, unfortunately, in a world where comparison is at its height, and we're faced daily with other people's faces, and bodies, and success stories. And so when someone pays you a compliment about the way you look, or a job that you've got, you could always think of someone that's kind of one up on you. And I think it's a shame.

Everyone. I mean, everyone does, particularly my fellow set and costume designers, just because it's a really tough gig. It takes a lot of hard work and willpower to find your place in this industry. I mean, I've been doing this professionally for eight years, and I still feel very much at the beginning of the journey. And when I think about all the time ahead of me, that's a fair kind of place to be. But yeah, people just need to keep going.