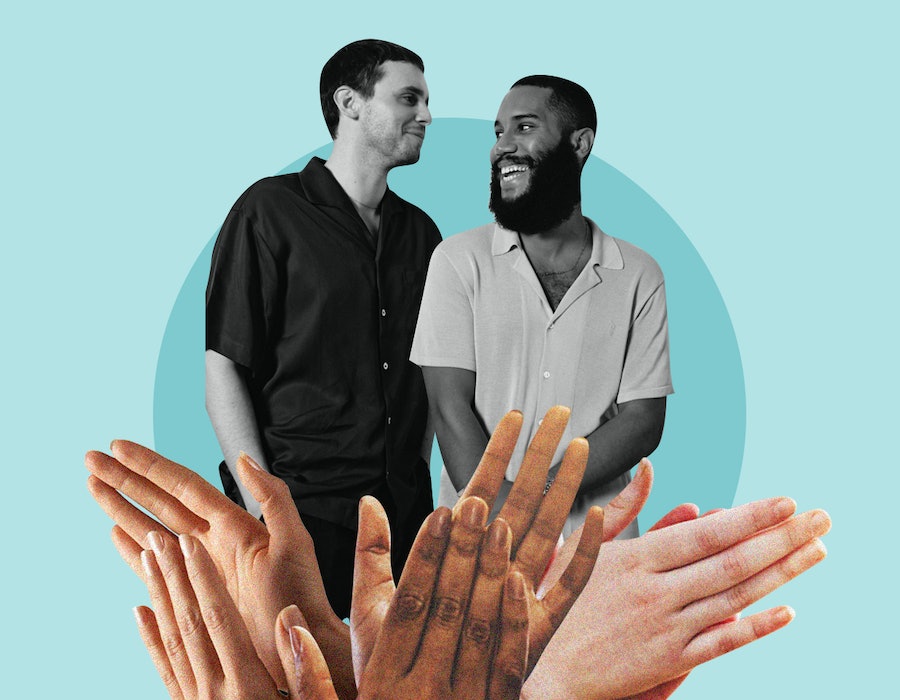 Welcome to Do It For The Applause, a series in which we ask performers, writers, business leaders, and public figures to think about the notion of applause and what it means to them. Today, we hear from Mickey Down and Konrad Kay, the writing duo behind Industry, a new eight-part series airing on HBO and BBC Two.

In the search for validation, meaning, and an understanding of what applause really means to us, few things could be more helpful than a drastic career change. The chance to pack it all in and start again is something many are still dreaming about right up until their retirement drinks in the office conference room.

In their mid twenties, Mickey Down and Konrad Kay took the plunge, leaving their jobs in banking to pursue a shared hope of becoming writing partners for TV and film. “I got very little validation from my work in banking because I was just so terrible at it," say Down, who worked as an analyst. "I had to work very, very hard to be average.” Kay, a former equity salesman, echoes the sentiment. In fact, the decision to leave banking was actually made for him: he was fired for being “the worst salesman the bank had ever seen,” he told the Times.

But that is in the past. Now, Down talks about the “insane amount of validation” he gets from his work as a writer. “In terms of the joy it brings me, the joy of working with Konrad, the joy of seeing something to fruition,” he says. For Kay, writing allows him to feel “a sense of self-actualisation that you just don't get in an office job.” Having the opportunity to express himself and to be paid for it is “a huge privilege,” he says.

Unlike banking – a profession Down and Kay admit they sleepwalked into from university – breaking into the creative world was a far slower process for the pair. They began to build a buzz around their partnership with Gregor, a 2014 black comedy that gained them a British Independent Film Award nomination, and went on to work on various projects for Film 4, Sky, and Dave. But the pair’s big break came a couple of years ago when HBO commissioned Industry, an eight-part series based on their experiences working in finance.

Much like Mad Men, Suits, and Succession (which the show has been repeatedly compared to in the past week), Industry doesn’t require viewers to arrive with a huge amount of knowledge about its professional setting. There is so much to grasp onto here beyond the trade floor jargon. The characters, for example, are what captured the attention of Lena Dunham when the script was sent her way by HBO. As Down explains, when he and Kay first sat down with the Girls writer, she was immediately upfront, saying “I don’t understand this world at all, but I understand the characters.” Dunham was excited about the show’s “dynamics,” Down explains, and said “these are people I've never seen on TV before.”

Plus the show’s themes – identity, peer pressure, hedonism, and hierarchy to name a few – are certainly not exclusive to the Square Mile. One that stuck with me was the spotlight on post-university life. The show’s lead characters are fresh, young graduates, poached from their sheltered academic circles and thrust into a professional world that quickly comes to define their sense of self. It’s something Down and Kay experienced themselves.

“When me and Mickey were at Oxford together, there were all these banks, law firms, consultancies. They make a big song and dance about coming up to the university in pretty much your first term of your first year. Then all the way up until your graduation, they court you,” Kay explains. It’s a smart thing to do, he says, seeking out people with an innate sense of competitiveness and an obsession with what their “record” says about them. “They imply, you know, ‘Your CV reads well so far, why don't you make it read even better in your early twenties?’”

This seduction technique is then bolstered by “all of the literature that surrounds the industry,” says Kay. Although much of it is “satire or backhanded condemnation,” movies such as Wolf of Wall Street and American Psycho can actually act as “a kind of recruitment tool” for a lot of young men in particular.

“In the five years between 21 and 25, I think I was really trying to figure out who the hell I wanted to be,” Kay tells me. “And the thing about banking is that it allows you that thing – where you have the name of the firm on the insignia on your bag, you could wear a suit to work, you can wear a tie to the nightclub. It allows your job to speak for you when you enter a room, which I think is a very seductive thing when you're young. You don't really have to think about it too much. And I think me and Mickey were super seduced by that. I think we were more obsessed with the idea of it than the actual thing itself.”

Would they warn their younger selves about that now if they had the chance, I ask? Would they persuade them to sidestep banking all together?

“It's interesting because I don't actually regret it at all,” says Down. “Obviously it's born fruit in a different, unexpected way. Our experiences there have led to the show we've done. And in some ways, those jobs taught us to work very hard, which is an attitude we've taken into our other work – just to buckle down.”

“I would say, ‘Relax. Because eventually you might grow into something you're slightly more proud of than you are now.’ I was always very concerned about not feeling comfortable in my own skin, but [that’s changed since] finding something that I feel is not validating to the outside world but validating to my own innate... whatever that thing is. That thing that makes you feel comfortable and know you’re doing alright.”

Below, Down and Kay dig deeper into their thoughts on hard work, accepting praise, and why we should treat compliments like sweets.

Mickey Down: My own. Well, mine and Konrad's, really. We only do anything for ourselves.

Konrad Kay: I agree. This sounds like bullsh*t, but it's actually true: if Mickey thinks the show is good, I know the show is good and therefore I can relax. It's a kind of bellwether for me on whether something is working or not. It sounds a bit of a cutesy thing to say, because we're in a partnership, but genuinely.

What form do you like your applause to come in? Double taps, five star reviews, standing ovations, or texts from your nearest and dearest?

MD: Out of those, I'd probably take a five star review.

MD: My favourite is from people who never give them.

MD: Probably the ones from people who give them all the time.

MD: True. If Konrad says anything nice to me or about me I tell him he's going soft. [laughs]

Why do you think so many of us find it difficult to accept applause?

MD: I find it hard to accept compliments because I never think what we've done is good enough. Genuinely, I always find fault in everything we've done. I feel that, if a compliment is coming from someone, I don't think the thing I've done deserves it. Or doesn’t deserve it yet. I think the compliment’s phoney.

KK: And the truth is, for a creative, that’s probably a good thing. I also think you want to be able to treat them like a sweet, where you just enjoy the flavour and then you just forget about it instantly. Because they have no nutritional value whatsoever. If you keep a bag of everything everyone's ever said that is nice about you, you wouldn't fucking do anything.

Both: Tommy Down, a fantastic multi-instrumentalist singer songwriter who features in Industry. And David P. Davis, a fellow first-time, up-and-coming Executive Producer on Industry. He has big things ahead of him.