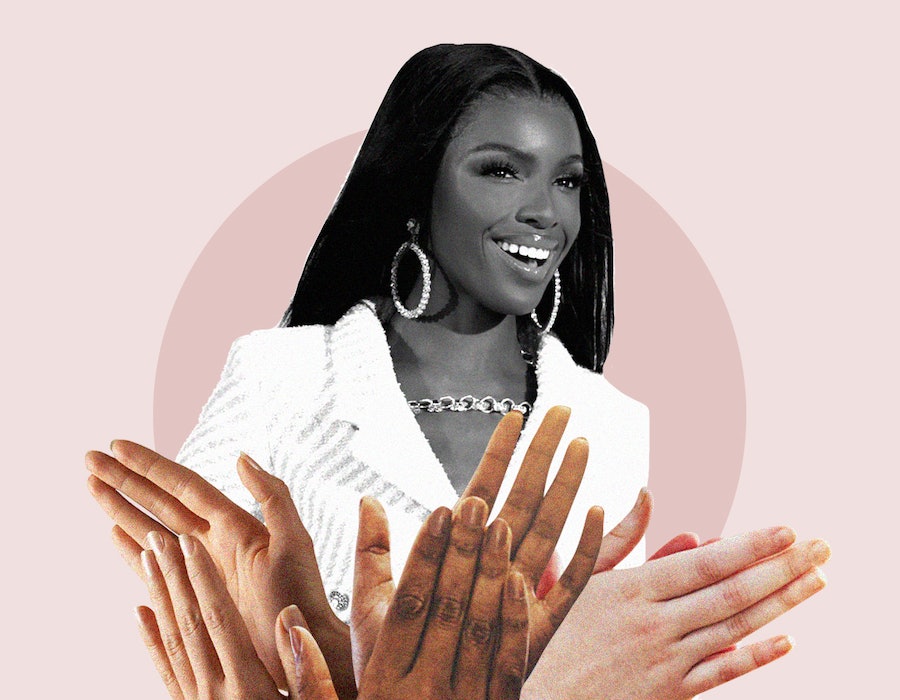 Courtesy Carver PR
Do It For The Applause

Welcome to Do It For The Applause, a series in which we ask performers, writers, business leaders, and public figures to think about the notion of applause and what it means to them. Today, we hear from model, entrepreneur and podcast host Leomie Anderson.

Leomie Anderson was first scouted at the age of 14 while walking home from school in south London. At 17 – an age when most of us were just about graduating from our Benefit Badgal eyeliner phase – Anderson was walking for Marc Jacobs. Since then, her catwalk portfolio has grown to include Burberry, Fenty Puma, and Tom Ford – to name just a few – and in 2019, she became the first Black British Victoria’s Secret Angel.

When I meet Anderson via Zoom, I begin by asking what it was like to enter the industry so young: has 10 years of being in the spotlight affected her sense of self-worth, I ask?

“I think that to have a long career in modelling, you can't really allow it to change your perspective on yourself,” Anderson, now 28, tells me. “When you allow people's perceptions of you to affect you and mould you in this career, it makes you very insecure and it can make you question yourself. It's something that a lot of models do experience, because you are fed a lot of different ideas of who you should be, how should you be, how you should look, your body image.”

She adds: “[When I got into it], I was a teenager, I was still learning myself. But I think around the age of 19, 18 years old, I was like, ‘Nah, I can't listen to anything that these people really say to me,’ and ‘I have to find the difference between constructive criticism and someone who’s just tried to say something for the sake of it.’”

“I think that to have a long career in modelling, you can't really allow it to change your perspective on yourself. When you allow people's perceptions of you to affect you and mould you in this career, it makes you very insecure and it can make you question yourself.”

Anderson has learnt you need to have “a very strong sense of self” to do what she does. “Because every other week, there's going to be a new trend or a new way to be, or a new thing to do in order to get to the top or to get people's attention, and you just need to stay true to yourself.”

For Anderson, staying true to herself meant branching out into projects outside of modelling and using her platform to help others. Working on LAPP – a clothes brand and content site Anderson founded in 2016 with the aim of empowering women – is when she feels most fulfilled. “Every day, I wake up with new ideas, and every day I try and figure out ways to be able to push the boundaries and just create a brand that hasn't really been done before, and I find that super exciting,” she tells me.

Now, alongside her modelling career and running a business, Anderson has also launched her own podcast, Role Model, where she aims to skip past the “sweet, sugary answers” you often hear from celebrities and get into the good stuff. The interviewee list so far includes huge names like Winnie Harlow and Michelle Williams. “I just want my listeners to go away after listening to Role Model and feel like, ‘OK, these people are human beings. They laugh, they cry, they have obstacles, there's things they hate, there's things they love, but they're just humans,’” Anderson says.

But what does the term “role model” mean for Anderson? “To me, it’s someone who moves through the world being themselves, and encourages other people to do the same,” she says. “That's a role model to me.”

Speaking about role models in her own life, Anderson mentions Oprah Winfrey (“I think that she's just fabulous!”) and Jordan Dunn (an interviewee for her podcast) as well as her mum.

“My mum’s one of my biggest inspirations and has taught me that, whatever I want to do, I should just try it,” she says. “I was one of those kids who would come home and be like, ‘Oh, mum, I want to try to gymnastics.’ The next week, I'll be doing gymnastics classes.”

She adds: “That to me is a good energy that she gave to me from a young age, and I've carried it with me throughout everything, and that's how I've ended up with my podcast Role Model, I guess, because I thought, ‘You know what? This is something that I want to try, let me try it to the best of my abilities.’ Now we're here.”

Below, Anderson and I talk more about confidence, self-worth, and finding your voice.

My own. Because at the end of the day, when I close the door on the world, I want to feel happy with what I've done, I want to feel happy with what I put out there, I want to feel excited and fulfilled. I'm very hard on myself, people always tell me like, "Oh, it's so amazing that you've done this or that," and in my head I'm like, “Ugh, I wanted to do it faster or bigger or in a different way." When I actually sit down and I look back at what I've done and I'm like, "Okay, I'm really happy and satisfied with it," that to me is the greatest applause, when I'm genuinely happy.

What form do you like your applause to come in? Double taps, five-star reviews, standing ovations, or texts from your nearest and dearest?

No, none of those. I would say when the mailman comes and delivers me my brand new vintage handbag that I bought myself. I only like to buy myself certain things when I've achieved something really great, so the mailman ringing my doorbell, or the little email saying, "Your order's on its way," I'm like, "Yes, yes, yes, yes."

My favourite type of compliment would probably be from young girls saying that I inspire them to start businesses or I inspire them to try new things. Those components mean the world to me, because that's exactly why I take so much pride in everything that I do. Because when I was younger, there weren’t that many people that I could reach out to or message and say, "You've inspired me to do XYZ." I was kind of just figuring things out on my own. So those are my favourite type of compliments to receive.

My least favourite type of compliment is a backhanded one... Those compliments based upon that person's assumption of the way they thought I, as a Black woman, would move and be, like "Oh, you're pretty for a Black girl," or, "Oh, I didn't expect for you to do XYZ or to be so well-spoken," or whatever. Especially like people who watch my TED talks, and be like, "Oh, I didn't think you'd be so well-spoken." Why the hell not, b*tch? I can switch it up. I mean, especially as a Black woman, you find that you learn how to switch it up and how to articulate yourself in different spaces. That's something that I've always been able to do, so I really hate the fact that it surprises people.

I think that people are scared to give themselves a pat on the back and say “I did this” because there are so many people out there who are actually waiting for your downfall, that sometimes celebrating your stuff outwardly can attract negativity, and it can attract a very negative energy toward you. That's why, for me personally, I sometimes I feel like I don't like to not show off. But it's not even showing off, is it? It's facts. Like if you've done something and it's done well, that's a fact, but people sometimes see it as showing off, people try and humble you.

I feel like some people might feel that it's just easier and safer just to just push on and not celebrate their wins or give themselves a round of applause for what they've done, but I don't think that's right. I don't think it's good to live your life in that way, because we only have one life, and when you do something that you should feel proud of, why shouldn't you be shouting about it? I love seeing women achieving things, getting that new car, getting that new job, stepping out of their comfort zone. Whatever their thing is, I love seeing it and it really does inspire me. But unfortunately there are a lot of people who don't want to see other people succeed because they're not happy within themselves.

I would say, it's not necessarily a specific person, but I think that Black people or people of colour within the glam industry – within hair and make up teams – they deserve a much bigger round of applause. Because, at the end of the day, Black hairdressers, they create trends and they're often overlooked, and then [someone will] hire a white hairdresser and pay them thousands to do the style that a Black person created, that they are the originators of. I think that we need to definitely be giving a round of applause to those who are the blueprint, and that is often Black creatives. That's just Black creatives in general, whether it's photography, hair, makeup, whatever. They're often overlooked, underpaid, and under-credited for what they do and their impact on the industry.

Listen to Role Model with Leomie Anderson on Apple, Spotify, and all podcast providers.