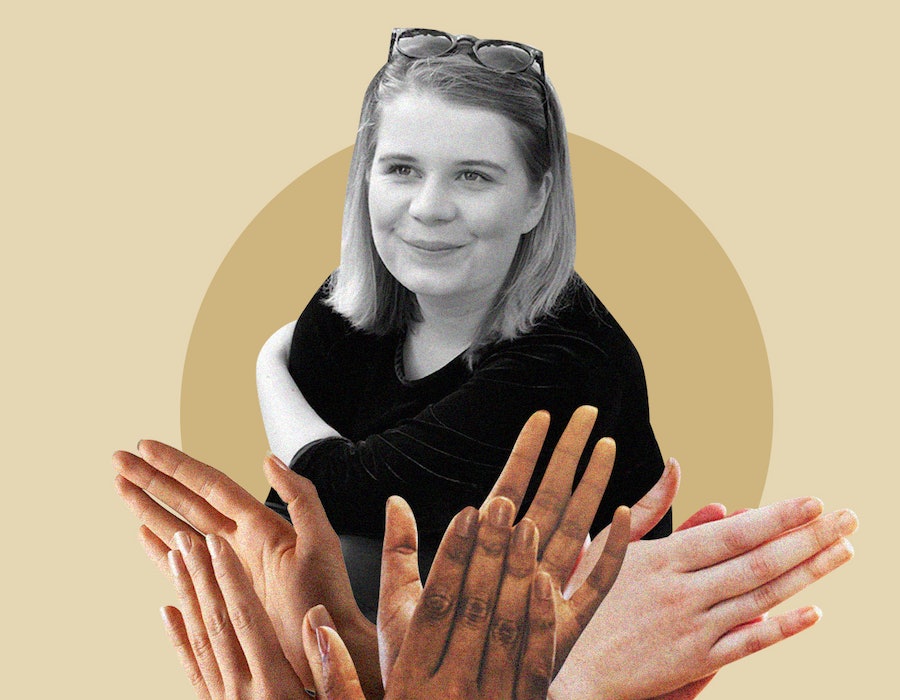 Alice Hoskyns / Maragret Flatley
Do It For The Applause

Welcome to Do It For The Applause, a series in which we ask performers, writers, business leaders, and public figures to think about the notion of applause and what it means to them. Today, we hear from writer and actor Eliot Salt.

We’re about four weeks into the country-wide lockdown when Eliot Salt and I log into our Zoom call. Sadly, due to the social distancing rules, our chat is taking place via grainy webcams rather than at a pub somewhere in South London, as we had hoped. Eliot and I have been friends for about seven years and, in the interest of full disclosure, a lot of that friendship has been spent at a pub somewhere in South London.

Luckily I’m becoming fairly used to seeing Eliot’s face on the small screen having just marathoned Intelligence, Sky One's MI5 comedy where she plays Evelyn, a totally useless PA with a very posh accent (something the 25-year-old writer and actor, originally from Manchester, was able to master thanks to “our time hanging around with people at Bristol University,” she jokes). Intelligence takes place at a fictional GCHQ, with Nick Mohammed and David Schwimmer in the lead roles. So first thing’s first, then: what was it like to meet Ross?!

“Well, I first met him in the audition, but he wasn’t very well, so he sat at the back of the room,” Eliot tells me. “And no one really interacts with you when there are a lot of people in the room for an audition. So it was a bit like having a fever dream where I was like, ‘David Schwimmer is here. Can anybody else see that David Schwimmer is here? Or is it a mirage?’ [But once filming starts,] it’s just weird how quickly you get used to things,” she says. “I’d mainly be reminded of [his fame] when he’d talking about ideas for a scene. Then I’d be like, ‘God, this is a person with really intense experience.’ He’s so creative and that’s when you go ‘Oh right, he’s such a big deal.’”

Before Intelligence, there was Game Face, a Channel 4 sitcom written by and starring Roisin Conaty, and Eliot's first TV gig. Game Face tells the story of struggling actor Marcella Donoghue, with Eliot in the role of Frances, a keen but occasionally ruthless assistant of Marcella’s therapist (Karl Theobald). Eliot describes it as a “crash course in how to be on TV.” Filming took place over just two days and “I learnt a lot very quickly,” she says. Working alongside two big British stars on your first show sounds fairly intimidating – and sober dancing in front of them even more so – but Eliot tells me she was able to relax into it. “I thought it was going to be a lot more scary than it was. I was really, really nervous at the beginning but people were genuinely so nice about it [being my first time on set.]”

This Sunday (April 26), Eliot will be starring in her biggest project to date: the feverishly anticipated BBC Three adaptation of Sally Rooney’s Normal People, where she plays Joanna, a character we meet during Marianne and Connell’s university years. In preparing for the role, Eliot put our English Literature degree to very good use, reading and re-reading the book and highlighting the relevant sections. Despite auditioning for other parts, she always felt a connection with Joanna – “there’s a lot of me in this character,” she says.

Did the popularity of the novel, which has now sold more than one million copies, intimidate her? “I was just really gassed that meant people would watch it,” she laughs. “And also I was way more stressed about just trying to be good at all. But there was a lot of pressure because it was directed by Lenny [Abrahamson, an Oscar nominee] and Hettie [MacDonald, Grand Prix award winner]. And they’re amazing, so I was more like, ‘I just want to stand in the right place and remember my lines.’ I think the pressure felt a lot more immediate ... It hadn’t occurred to me about people watching it at that point. I was just like, ‘Don’t fall over.’”

Being only a couple years into her career (she graduated from LAMDA in July 2018), Eliot is still building confidence on set and, like most of us, learning to recognise when she deserves praise. “Right now, I very much rely on other people telling me I’m doing a good job,” she says. “But I hope, going forward, the more I can watch and see the mistakes I made, and see what I’m doing well, hopefully, the less needy I will be for other people’s applause.” With two other huge projects on the horizon – Netflix's Fate: The Winx Saga and a play at the National Theatre – I'm very much looking forward to congratulating her with a pint at one of South London's finest soon.

My parents’. Because they're quite brutal. I did a show once and came off stage and they were like, "That was awful." It was one of my drama school shows, which, to be fair, was awful. I mean, they’re always nice about me, they'll be like, "You were good," but I just know when they don't like something and I really rate their view. But also – crucially – everyone's applause means the most to me. Every single person I ever meet. I just need to know that people like me and I'm willing to receive that in any form. [laughs]

Any of the forms. [laughs] No, I mean, a standing ovation is lovely – and texts from people that I love. Oh, and also texts from people I know but not super well. I think that's the sweet spot because there are some people who just have to be nice to me, but if people text me and they didn't have to then I'm like, "Ow yeah! I'm sick!"

I think as detailed and as long as possible, please. Citations and bibliography optional but encouraged.

If someone says, "Oh, you've got such a nice face though.” Or someone calling me "bubbly". Oh, wait, that’s it. That's my final answer – being called bubbly is dreadful.

I guess it's hard sometimes to know how to receive it genuinely. It's trying to find the balance between responding with, "Yeah, I know,” or with, "No, no, please no, I'm the worst person that's ever lived. Please stop." I feel like that sometimes. I’ll say to myself, “Don't seem too confident about it but also don't seem like you're sad to receive the compliment.” I think it's a taking up space thing as well, isn't it? Some people find it more difficult to do that than others for various structural reasons. So you're giving yourself space to be like, yes, I am worthy of receiving praise. Which society often tells us we aren't.

The very brilliant Harry Trevaldwyn who makes hilarious character videos and is very deservedly breaking through as we speak via Home Alone With Joel Dommett.

This article was originally published on April 23, 2020