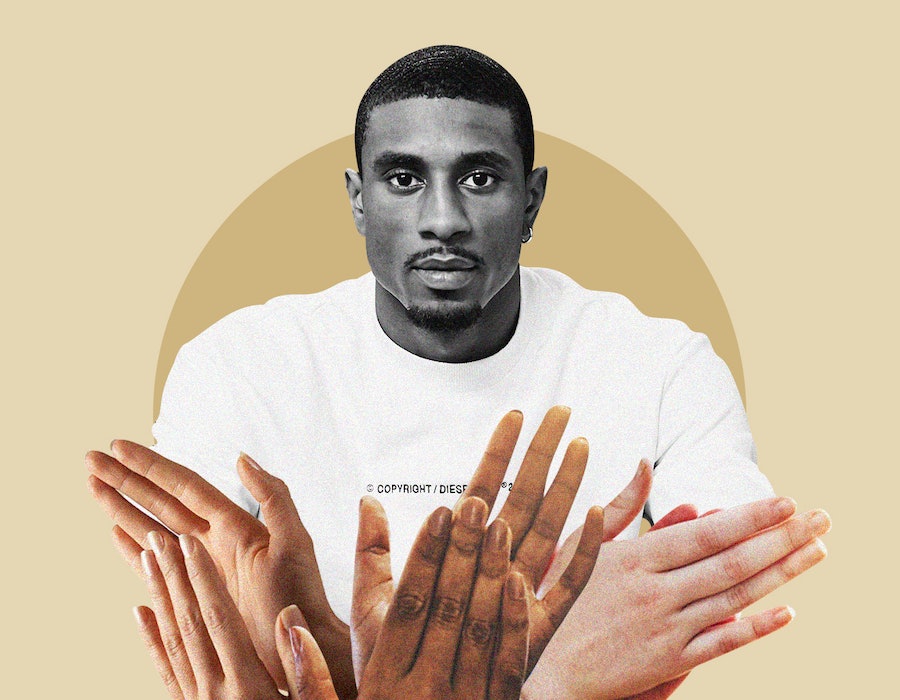 Welcome to Do It For The Applause, a series in which we ask performers, writers, business leaders, and public figures to think about the notion of applause and what it means to them. Today, we hear from Ovie Soko, a professional basketball player and 2019 Love Island contestant.

Ovie Soko is an excellent person to speak to about applause and self worth. I mean, he quite literally wrote the book on it. In You Are Dope, the former Love Island star teaches readers how to discover their “dopeness” and harness the power of it.

For Soko, this journey of discovery began at school, where he would often get in trouble for “being a bit of an oddball.” But, he says, “as I've gotten older and been able to make more of my own decisions, as I’ve got more freedom, it's proved the opposite.” Soko has found that “stepping out of the norm” – opting to play basketball when his schoolmates chose football or rugby, for example – is exactly what helped him build his confidence.

I ask Soko if he sees that same level of confidence among his fellow Love Island alums. As viewers, all we see is tiny bikinis, toned abs, and unashamed make-out sessions, and we assume this kind of bravado translates offscreen. Is that true?

He adds: “If you really don't like spending time with who's in the room when you're alone, then you can post a nice picture. And then all of a sudden, thousands of people are interacting with you in some kind of way.” It’s all about finding a quick “dopamine hit,” he says.

This idea is at the centre of Soko’s new BBC Three documentary, Life After Reality TV. In it, he speaks to stars who’ve had varying levels of ‘success’ after appearing on screen and tries to decide whether he himself wants to continue with his basketball career or become a full-time influencer and media personality.

Soko’s biggest takeaway from filming “was just how extreme that world can be on both sides,” he says, speaking about the money and adoration versus the trolling and lack of privacy. During the documentary, Soko hears some harrowing revelations from Mario Falcone about his years on The Only Way Is Essex and the impact to his mental health. Is Soko scared about the darker side of being an influencer?

“Man, 100%. 100%. When I had some of these discussions with those guys, it just let me know how very, very possible it is that people could, all of a sudden, just turn on you. It really opened my eyes up just to the nature of the beast.”

For now, Soko has opted for a “blended” lifestyle, focussing most of his energy on basketball but picking up a few partnership deals here and there. “To me, being an influencer, I think it's definitely a skill. It's not as easy as a lot of people would think. But I think basketball is more gratifying just because I've put more time into it. I’ve sacrificed things for it.”

His passion for the game is clear throughout our conversation, especially for LeBron James, whom he idolises. "I might freeze up if I meet LeBron" he says, adding that Denzel Washington, Thierry Henry (“that's the guy”) and Barack Obama would also have the same effect on him. When I suggest Soko should ask the former president for a game of basketball, he laughs. “I definitely would have to let him win. I mean, he's got game man. He's definitely got game,” Soko says, adding: “But I would kick his ass, to be fair.”

Below, Soko and I dig deeper into his thoughts about self-worth – including why he's not too fussed about being good looking.

I would say text messages, man. Well, I wouldn't even say a text because I would probably say a phone call – a conversation. Because it's real. It's different. Not everyone has that same kind of access to you, you know? Not everyone can give you applause that way. It's very, very personal.

The aesthetics thing. Just because, I don't know, that's just sort of like a lottery, isn't it? Don't get me wrong, it's nice. It's cool. I do appreciate that opinion. But yeah, man, it's... your name just got drawn out of a hat. And it's [so based on] opinion, isn't it?

Why do you think so many of us find it so difficult to accept applause?

It's about not realising your value. A lot of us don't realise how valuable we are because so much of our lives we're put into these sort of boxes and we're funnelled down certain paths from an extremely, extremely, extremely young age that almost brainwash you into believing that you're just one of the masses. And it's always nice to be part of a community, but we are all extremely important as individuals. Once you lose sight of that, you almost lose your sense of self value. You don't understand that it's nice for you to accept applause and it's not a bad thing. It's not you being arrogant. It's not being big headed. It's just a thank you.

Who deserves more applause in your industry?

I don't know if he deserves more applause, but I know he deserves applause. LeBron James, man. He just won the championship, won another world title, which I think is absolutely terrific. He's one of these people that it was just never good enough. And as great as people know he is, I genuinely believe that people don't understand how amazing he is and they won't until he retires one day and we no longer see him playing in my field.

More like this
This Pre-'Love Island' Video Of Olivia & Zara Together Changes Everything
By Bustle UK
'Love Island’s Kai Fagan Is Very Clear About What He Doesn’t Like
By Sam Ramsden and Darshita Goyal
Every Season Of 'Love Island' Ranked Best To Worst
By Alice Broster, Frances Stewart and Sophie McEvoy
ITV’s New Take On 'Love Island' Is Only For MILFs & DILFs
By Sam Ramsden
Get The Very Best Of Bustle/UK
Sign up for Bustle UK's twice-weekly newsletter, featuring the latest must-watch TV, moving personal stories, and expert advice on the hottest viral buys.