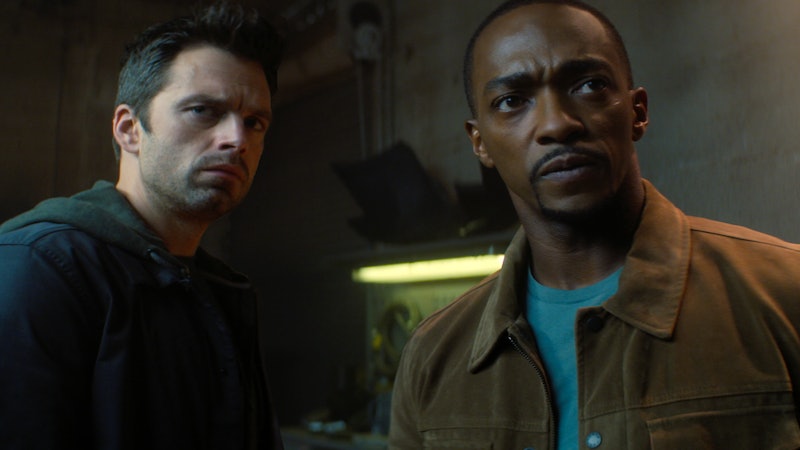 When WandaVision premiered in January, many viewers found themselves drawn to the series for reasons beyond the usual action and superhero fare, like its classic sitcom references, examinations of grief and trauma, and catchy theme songs. It still moved Marvel further toward Phase 4, but it was also proof that the MCU’s upcoming slate of TV shows isn’t just for hardcore fans. And the next entry in the lineup, The Falcon And The Winter Soldier, should be just as easy for Marvel newcomers to dive into. You’ll just need this primer first.

What Is Falcon and the Winter Soldier About?

The Falcon And The Winter Soldier picks up in the wake of the events of Avengers: Endgame, about six months after the world’s mightiest heroes defeated the mad Titan Thanos. At the end of that film, Steve Rogers — aka Captain America — went back in time to return the Infinity Stones to their proper places in the timeline (long story) and decided to stay in the past so he could live the life he missed the first time around with his long-lost love, Peggy Carter. In the present day, a now-aged Steve passed his iconic shield to his wingman Sam Wilson, as Steve’s best friend Bucky Barnes looked on in approval.

Now that Cap is too old for superheroics, it will be left to Sam and Bucky to carry on his legacy in whatever way they can — including perhaps facing a threat Steve thought he had already defeated.

Already lost? Let’s take a step back and cover the basics.

Who is The Winter Soldier?

Played by Sebastian Stan, James Buchanan Barnes (known as Bucky) is Steve Rogers’ oldest friend — literally. They were childhood pals in Brooklyn in the 1940s until Bucky enlisted in WWII and left scrawny Steve behind. Thanks to an experimental serum, Steve became Captain America and led many missions against the Nazis, including rescuing Bucky from behind enemy lines. Unfortunately, Bucky was soon lost during a fight against Hydra… or so Steve thought. An injured Bucky was really captured by Hydra, experimented on, and turned into a brainwashed super-soldier assassin, codenamed The Winter Soldier. (Because he was put on literal ice between missions, Bucky is still basically the same age he was during WWII.)

Steve learned that his best friend was still alive as he was fighting against Hydra’s infiltration of S.H.I.E.L.D. and managed to break through Bucky’s brainwashing enough to make Bucky start remembering bits of his old life. Thanks to the advanced science in Wakanda, Bucky was finally “cured” and fought alongside Steve against Thanos. He was one of the heroes lost when Thanos snapped his fingers and dusted half the universe, but he was returned to life along with the rest of the Avengers at the climax of Endgame. After Thanos was defeated once and for all, Bucky said goodbye to Steve, knowing his friend’s intention to stay in the past.

Who is The Falcon?

Played by Anthony Mackie, Sam Wilson met Captain America when Cap and Black Widow were on the run from S.H.I.E.L.D., which had been infiltrated by Hydra. With no one else to trust, they turned to Sam, a veteran acquaintance of Steve’s. Fortunately, Sam’s experience piloting an experimental flight suit came in handy in the fight against the Nazi organization — a fight during which he first came in contact with the brainwashed Winter Soldier.

After the revelation that the Winter Soldier was none other than Steve’s pal Bucky, Sam helped Steve track Bucky down. He didn’t exactly trust the recovering-but-psychologically-damaged assassin, but they nonetheless fought together with Cap in the Avengers’ Civil War. Like Bucky, Sam was dusted during The Blip, but was resurrected with all the other heroes to fight in the final battle against Thanos. With that threat vanquished once and for all, Steve traveled back in time to live his life in the past. When he resurfaced in the present as an old man, he passed his shield — and his legacy — to Sam.

Is There Anyone Else You Should Know?

When the cute nurse next door turned out to be an undercover S.H.I.E.L.D. agent placed there to keep an eye on him, Steve was surprised. When he learned that the agent was actually the niece of his One True Love, Peggy Carter, he was shocked. But that still didn’t stop him from kissing her while Bucky and Sam gave him bro-y nods of approval. Sadly for Sharon, in the end Steve chose her aunt over her, staying in the past to live a life with Peggy. (Also, if you believe the theory that Steve was always Peggy’s husband, that means he kissed his own niece. They’ll probably gloss over that part in the show.)

After Zemo’s family was killed during the Avengers’ fight against the evil robot Ultron, he became obsessed with tearing the superhero team apart from the inside. To this end, he followed a trail of clues that led him to the identity of the assassin who killed Iron Man’s parents, Howard and Maria Stark: The Winter Soldier. After luring Tony, Steve, and Bucky to a remote location, he revealed the truth and watched the chaos unfold. Tony wanted to kill Bucky for murdering his parents, and Steve couldn’t let his teammate kill his best friend; the two fought nearly to the death, and Steve left a fugitive to get Bucky help in Wakanda. His mission of breaking up the Avengers accomplished, Zemo was prevented from taking his own life and turned over to the CIA.

Bucky and Sam aren’t the only sidekicks mourning the loss of a comrade in arms. That’s why it’s no surprise to hear that James Rhodes, who is himself currently mourning the loss of his best friend Tony after he sacrificed himself to defeat Thanos, will be making an appearance in The Falcon And The Winter Soldier. Another thing he has in common with both Bucky and Sam is a career in the military, having served for years in the Air Force before donning the exosuit that turns him into War Machine. These traumatized, grief-stricken veterans-turned-superheroes will surely have plenty to bond and commiserate over.

Though a relative minor entry in the pantheon of Marvel villains, fans will be delighted to see the acrobatic Algerian pirate Batroc pop back up again in Falcon And The Winter Soldier. What do you need to know about him? Probably not much, to be honest: he speaks French, loves parkour, and is up to no good.

What About New Characters?

In addition to those familiar faces, there will be plenty of characters that both longtime fans and newcomers alike will be meeting for the first time.

Wyatt Russell (Lodge 49) will join the MCU in The Falcon And The Winter soldier as John F. Walker, known in Marvel comics by the codename U.S. Agent. Who is he? Well, while Steve might have intended to pass his shield on to Sam, it will become clear pretty quickly that the United States government has a decidedly different opinion about who should take up the mantle of Captain America — and (surprise, surprise) it’s not a Black man.

Fans of a different Disney franchise may recognize the redheaded Kellyman as the fan-favorite rebel Enfys Nest from Solo: A Star Wars Story. In The Falcon And The Winter Soldier, she plays Karli, the young leader of a group of anti-patriotism terrorists called the Flag-Smashers. (In the comics, Flag-Smasher is the alias of a man named Karl rather than the name of an organization, but the MCU has always had fun crafting new twists on old Marvel ideas.)

With The Falcon And The Winter Soldier sure to delve into the personal histories of both Bucky and Sam, the show is bringing in Adepero Oduye (12 Years A Slave) to shed some light on Sam’s backstory. Oduye plays Sam’s younger sister, Sarah Wilson, and it’ll be interesting to see what she thinks about her big brother becoming Captain America.

Will Captain America Show Up?

After all this talk about Captain America, viewers may want to know if the hero will show up at any point. While the folks at Marvel are being tight-lipped about any possible Chris Evans cameo, remember that even if Steve Rogers appears, it would be as an old, wrinkly, grey-haired man. (Unless The Falcon And The Winter Soldier is ready to get into any more time-travel and/or multiverse shenanigans, which seems unlikely.) In fact, fans should perhaps prepare themselves for the unthinkable. With the new show being all about carrying on Cap’s legacy, is it possible that the writers will — gulp — kill off Captain America??

What Movies Should You Watch to Catch Up?

OK, so now that you’ve had your crash course on the who’s-who and the what’s-what of The Falcon And The Winter Soldier, perhaps you’re ready for more in-depth research. If you’re going to watch any of the MCU movies, the Captain America ones are of course a must, especially the latter two:

If you have time, you should go back and catch the first entry in the trilogy:

For some extra credit, add this one to your list:

For the completionists among you, pop this one in before Endgame:

More like this
Louisa Harland’s New Show Is A Far Cry From Derry Girls
By Frances Stewart
The 'Andor' Timeline, Explained
By Gretchen Smail
UK Audiences Will Soon Be Able To Watch 'The Bear'
By Frances Stewart
HSMTMTS Season 4 Will Include A Major Nod To The Original 'High School Musical' Movies
By Brad Witter
Get Even More From Bustle — Sign Up For The Newsletter