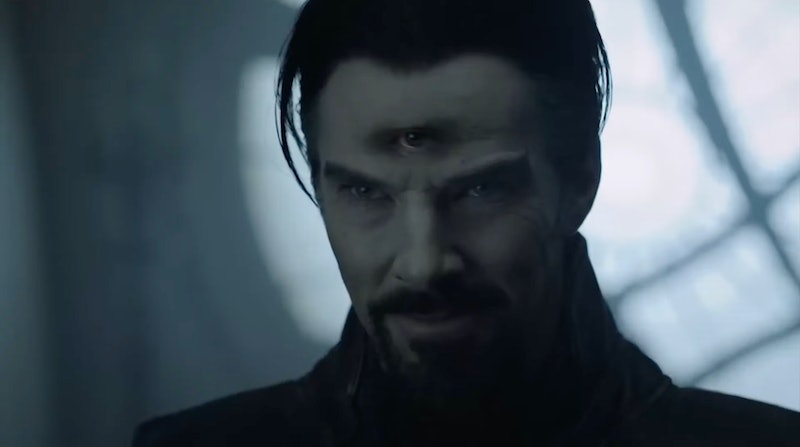 Warning: Major spoilers for Doctor Strange and the Multiverse of Madness follow.

At the end of Doctor Strange and the Multiverse of Madness, a third eye appears on the forehead of the eponymous superhero (Benedict Cumberbatch). Those who haven’t read the comics may be scratching their heads trying to figure out what this represents, or why the filmmakers chose to end the movie so ambiguously. Luckily, some of that confusion has been cleared up by the movie’s screenwriter, Michael Waldron.

To recap: In the latter half of the film, a third eye is seen on the forehead of an evil Doctor Strange variant who lives in a universe that he’s destroyed. Some time later — after the Scarlet Witch (aka Wanda Maximoff) destroys the Darkhold and sacrifices herself in the process — the regular Strange is seen leaving the Sanctum Sanctorum, before he suddenly drops to his knees. A third eye appears on his forehead as he screams in pain. And that’s all viewers get to see: Right after Strange gets a third eye, the screen goes black and the credits roll.

So what does the superhero’s third eye represent, and how will it affect his character in future MCU films? Below, an overview of Doctor Strange’s third eye as it appears in the comics, as well as what screenwriter Michael Waldron has said about it.

What Does The “Third Eye” Represent In The Comics?

Fans of the Doctor Strange comics will recognize the “Third Eye” as related to the Eye of Agamotto, an amulet that reveals the truth to its beholder through a “revealing light.” In the comics, a third eye sometimes appears on Strange’s forehead as a manifestation of this special artifact.

The eye-shaped necklace was created by Agamotto, a Vishanti (a God-like being who protects Earth) and the first Sorcerer Supreme, alongside two other artifacts: the “Eye of Power” and the “Eye of Prescience.” The Eye of Agamotto is also known as the “Eye of Truth.”

In an interview with Rolling Stone, screenwriter Michael Waldron explained the filmmakers’ decision to end Doctor Strange and the Multiverse of Madness with a plot twist:

“I felt like we had a happy ending. We were like, like, ‘Gee, you know, for a movie where a lot of bad sh*t happens, we got kind of a happy ending here.’ We really wrapped it up and that didn’t quite seem right. We kept thinking about what Mordo warned Strange in the first movie: ‘The bill comes due.’ It’s like Wong says, ‘You possessed your own corpse.’ Like, is this guy ever going to face any consequences? And it just felt like a great nod to horror movies where there’s that final twist.”

Waldron also hinted that — unlike in the comics, where Strange’s third eye is representative of a force for good — the eye might signify something sinister. “He used the Darkhold to possess his own corpse and the Darkhold exacts a heavy toll,” he told ScreenRant. “I guess the question that our tag is asking is: Is Stephen embracing that darkness? What does that mean for him? What path is he going down as he meets Clea and haunts off to the Dark Dimension?”

More like this
Chris Hemsworth Joked That Baring His Butt In ‘Thor: Love And Thunder’ Was A “Dream”
By Brad Witter
Everything You Need To Know About The 'Knives Out' Sequel
By Grace Wehniainen
The 'Hocus Pocus' Sequel Finally Has A Release Date & It Makes Total Sense
By Shannon Barbour and Radhika Menon
Everything To Know About 'The Hunger Games' Prequel Movie
By Grace Wehniainen and Radhika Menon
Get Even More From Bustle — Sign Up For The Newsletter