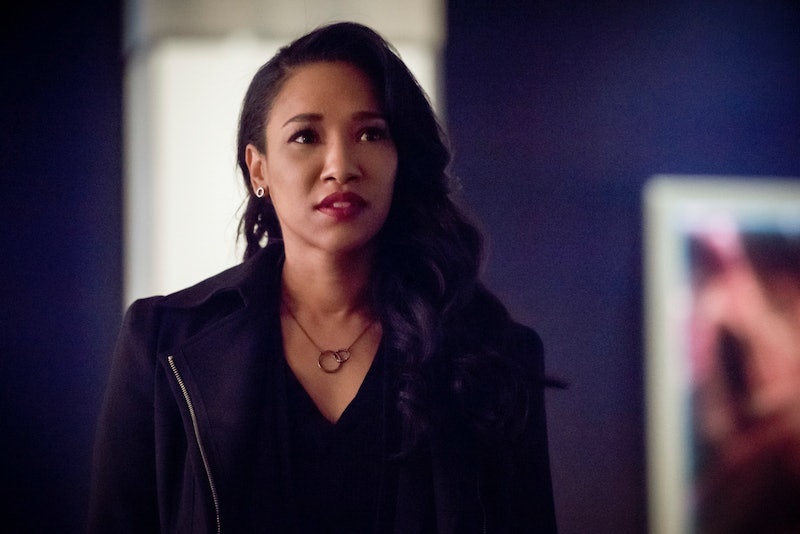 The last fans saw of Iris on The Flash, she was investigating the shady McCulloch Tech and its missing co-founder, Eva – who shares a name with the comics villain Evan McCulloch, aka Mirror Master. When Iris stumbled on a giant mirror in Eva's old office, Eva reached out from the mirror and dragged her inside. At first Iris believed the scientist was also trapped there, but eventually she figured out Eva was a criminal mastermind who even sent an evil Iris clone to replace her in the real world. In the end, Iris wasn't able to escape, and she suddenly disappeared in a rainbow flash.

It wasn't the ending The Flash team had originally planned: filming for Season 6 was cut three episodes short due to the coronavirus pandemic, leaving Iris trapped in this alternate world. But showrunner Eric Wallace confirmed to TVLine that Season 7 will immediately wrap up the story. "In the first few episodes we’ll be getting Iris out of the Mirrorverse, all those good things, and we will be wrapping up the Eva McCulloch storyline," he said. He added that because the first episode of Season 7 was never intended to be a premiere, they had to "give it an entirely new opening that had more Flash-y action."

Still, Patton warned that Iris likely won't be the same after she returns to the real world. “It’ll be very interesting to see how she’s been affected being stuck in this maddening world with this supervillain," Patton told TVInsider. "Obviously Team Flash and Barry were working to get her. It took a while. I don’t know if there’s some resentment there or what’s going on or if there’s even some residual mental effect of being in that mirror world and seeing things backwards.”

In an E! News clip, it looks like Iris definitely ends up confronting — and being mocked by —several alternate versions of herself in the Mirrorverse. "I'm no fractal anomaly. I'm a product of your broken mind," one Iris tells her. "You pushed your mind until it broke, forever." Another version taunts her that she's been trying to get out for a long time with no success. "How long have you been trying to get out? Weeks? Months? You are weak in every universe. An insignificant speck. A victim," they say. Iris may soon escape the Mirrorverse, but it remains to be seen how much her trauma will affect her going forward.

More like this
How A Location Blunder Changed The Outcome Of 'The Capture' S2.
By Darshita Goyal
Here's What Jeffrey Dahmer's Dad Has Said About His Other Son, David
By Grace Wehniainen
Where Is Lionel Dahmer Today? Jeffrey Dahmer’s Father Reflected On The Serial Killer’s Death In 2020
By Brad Witter
'Grey's Anatomy's New Intern Got Advice From Dr. Bailey Herself
By Grace Wehniainen
Get Even More From Bustle — Sign Up For The Newsletter