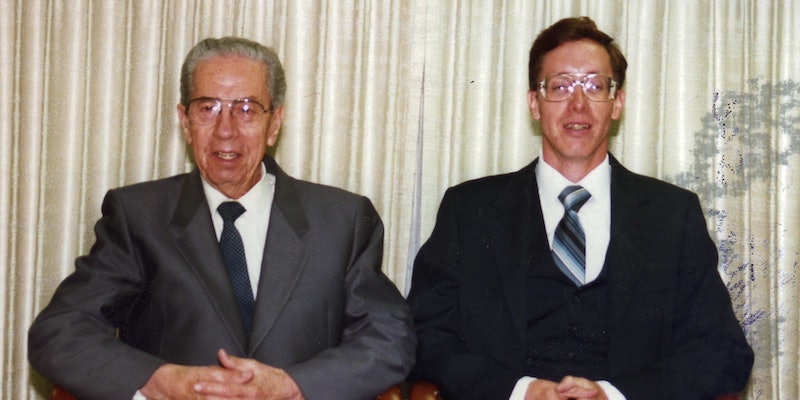 After Peacock’s Preaching Evil introduced the story of Warren Jeffs and his many wives, Netflix’s Keep Sweet: Pray and Obey dives further into the Fundamentalist Church of Jesus Christ of Latter-day Saints (FLDS). It chronicles Jeffs’ rise to power as its self-professed prophet and how he reportedly amassed around 80 wives, many of them underage. In 2008, a raid on the Yearning for Zion Ranch in West Texas turned a spotlight on Jeffs and the FLDS, as police uncovered shocking evidence of sexual, physical, and psychological abuse. Using archival footage and stories from members who escaped the cult, Keep Sweet: Pray and Obey explores how Jeffs instituted a culture of abuse and pedophilia, and how it all unraveled with his eventual arrest and imprisonment.

As the docuseries explores, when Jeffs’ father, Rulon, died in 2002, he dissolved the council and established a one-man rule, declaring himself president and prophet and above all government laws. The FLDS split off from the wider Mormon church in 1930 to continue practicing polygamy, but under Jeffs, the organization became even more sinister. Jeffs banned contact with the outside world, took control of worshippers’ finances, and threatened harsh reprisals to anyone who left the church. He would parcel out wives, often underage teenage girls, to his most loyal followers, who were often older men. If the men swayed in their convictions, the girls were then “reassigned” to other men at Jeffs’ leisure. “Young girls were like a commodity owned by the church,” the series trailer explains. The title of the series itself refers to how the girls were told to “keep sweet” — smile all the time — even in the face of horrific abuse.

“I would do anything I could to make him fall asleep,” said Rebecca Wall, a former member who was married off to 83-year-old Rulon when she was 19, in the series. “Then I could pass by another night without having him touch me.” Wall’s sister Elissa similarly recalled that the “front of my wedding dress just got more and more soaked [with tears],” when she was forced to marry her cousin when she was only 14.

Jeffs ruled for 15 years before he was arrested in 2006, having landed on the FBI’s Most Wanted list for forcing two teenage girls into marriages with adult men. In 2011, he was given a life sentence for raping two underage girls whom he’d forced to marry him.

It’s unclear if the FLDS still exists today. “Former member here. The church itself doesn’t exist anymore but there are small groups still trying to keep it alive,” wrote one Reddit user. After Jeffs’ arrest in 2006, an anonymous tip alleging sexual abuse of children prompted law enforcement to raid the Yearning for Zion Ranch in April 2008; the ranch was thought to be FLDS’ second headquarters, sitting near Eldorado, Texas. More than 400 children were taken into custody, but they were later returned to their parents by court order. Per The Salt Lake Tribune, the state of Texas seized the property in April 2013, and as of 2018, longtime resident J.D. Doyle said the buildings were all empty and the government was just “let[ting] it rot.”

Meanwhile, Jeffs’ 44-room mansion in Short Creek — which straddled the line between Hildale, Utah, and Colorado City, Arizona — was abandoned and later purchased by one of Jeffs’ former wives, Brielle Decker. Per The Guardian, Decker now uses the mansion as refuge for other women fleeing FLDS, as well as those dealing with substance misuse issues.

A man by the name of Wendell Loy Nielson applied to be the new church president in 2010, but in 2012, he was found guilty of bigamy and was sentenced to 10 years in prison. Then Jeffs’ brother Lyle seemed to take over, but in 2016, Lyle Jeffs, along with 11 high-ranking FLDS members, was arrested and accused of fraud and money laundering. While awaiting trial, Lyle managed to slip out of his FBI ankle bracelet, but he was arrested in Yankton, South Dakota, nearly a year later after an anonymous tipper spotted him living out of his car. He was sentenced to 57 months in prison in December 2017.

No other leader has publicly surfaced since then. “The fate of the FLDS remains unclear,” wrote The Southern Poverty Law Center (SPLC), which has designated the FLDS as a hate group. “There is some evidence that Warren Jeffs continues to lead the group from prison, but reports have surfaced of a memo in which he renounces his position as prophet.” There are likely wives who are still loyal to Jeffs, per Deseret News, while others allege that Jeffs still rules from prison. As the SPLC concluded, “It is entirely possible that the group will emerge from this current struggle strengthened and more insular than ever.”