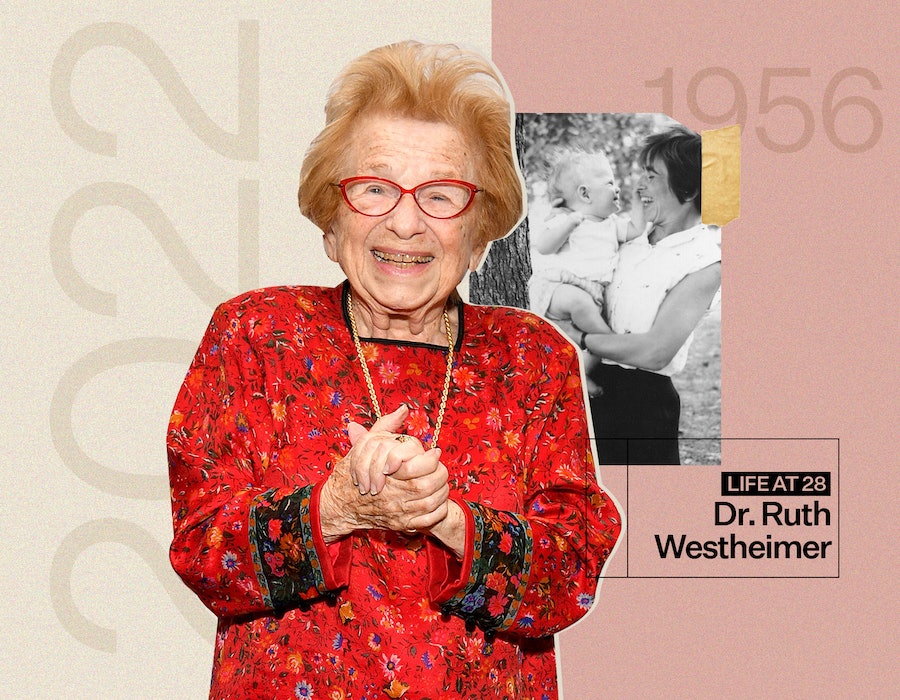 Dr. Ruth Westheimer is known for her unabashed, often humorous sex advice. But when I ask her what her own sex life was at 28, she demurs. “Next question!” Westheimer tells me, before breaking out in a fit of laughter. Though she doesn’t want to tell me about her sex life, she assures me she’s always been comfortable with sex in general. “I'm very Jewish, and in the Jewish tradition, sex has never been a sin. So I never had any of these problems that others had in being up uptight about talking about sex.”

The 94-year-old’s journey to becoming America’s most celebrated sex therapist was an improbable one. Born in Germany in 1928, Westheimer was 10 when her parents sent her to an orphanage in Switzerland for safety when the Nazis came to power. (They later died in concentration camps.) After World War II ended, Westheimer went to Israel and trained as a sniper. Next, she moved to Paris to study psychology at the Sorbonne, before finally decamping to New York City at age 28.

“I didn’t know that I would become Dr. Ruth. I was fortunate,” she says, crediting the many women who helped and inspired her along the way. “I got training by Dr. Helen Singer Kaplan at Cornell University’s medical school. I got accepted to her program and she was the first to have really started sex therapy as we know it now.”

Westheimer stayed in academia until 1980, when she launched the radio call-in show Sexually Speaking at age 52. The program became a sensation, as America fell in love with the heavily accented, four-foot-seven, middle-aged lady who dared to talk frankly about everything from blow jobs to female pleasure. Westheimer went on to land a TV series called The Dr. Ruth Show, write 45 books on sex and sexuality (including The Art of Arousal, which was reissued this spring), and be awarded the Order of Merit of the Federal Republic of Germany.

When asked about all she’s accomplished, Westheimer responds with the same cheeky wit that made her a star. “Not bad for a little immigrant without a high school diploma,” she says. Not bad at all.

Take me back to 1956, when you were 28. It was the year you moved to America. What was that experience like for you?

I didn't think that I would immigrate. I thought I came only on a visit from Paris, on a tourist visa with my then-boyfriend whom I married. And I had my daughter Miriam here a year later, and then we divorced. Then I luckily found Fred Westheimer from Germany, also an immigrant to this country. He was an American citizen, so I became a citizen and here I stayed.

How were you feeling about your life and career upon moving?

I worked for 75 cents an hour as a babysitter and house maid in Washington Heights, but only for very few weeks. Then I got a wonderful job at the French Embassy Cultural Division on Fifth Avenue, where I made $1 an hour.

I thought I'd be either a kindergarten teacher or maybe a director of a kindergarten. Then I thought, if I'm here already, The New School for Social Research had a scholarship available for people who came out of Nazi Germany [that I should apply for]. I spoke very little English, but the people at The New School spoke German and some spoke Hebrew. So I learned English fast. Then I transferred to Columbia University's Teachers College, also on a scholarship. So this country, and the academic world in this country, were very good to me.

You were doing a lot of studying. Was there anything you liked to do to unwind?

Oh, I was out every night. I already knew that I liked to dance and I liked to socialize, and that helped me also with the English language. I always had tremendous energy [because] I'm so short, four-foot-seven.

Where you would you go to dance?

Only in people's houses. I already lived in Washington Heights and the living room had very little furniture, except for a gramophone and records for dancing. So every Friday we had a party. I only provided the potato chips and the music and the [guests] all brought food. [We danced to] Israeli folk music, also the German Waltz, and the Conga. I was a good dancer.

Do you have any regrets from age 28?

Not one. Not even my failed marriages, two of them. Because then I married Fred Westheimer, that was the real marriage. No regrets.

Has there been a time where you felt like you made it?

Like today, because you are calling. I'm very fortunate. I'm looking out the window in my apartment in Washington Heights and I see the Hudson and the George Washington Bridge to the left. See? No regrets.

More like this
Megan Rapinoe's Relaxation Hack Is Super Dreamy
By Carolyn Steber
Chelsea Clinton On The Best Advice She Ever Got From Her Mom
By Brianna Kovan
At 28, Sharon Horgan Was Hoping To See Damon Albarn At The Pub
By Samantha Rollins
What Joyce Carol Oates Knows About Fame
By Erin Somers
Get Even More From Bustle — Sign Up For The Newsletter