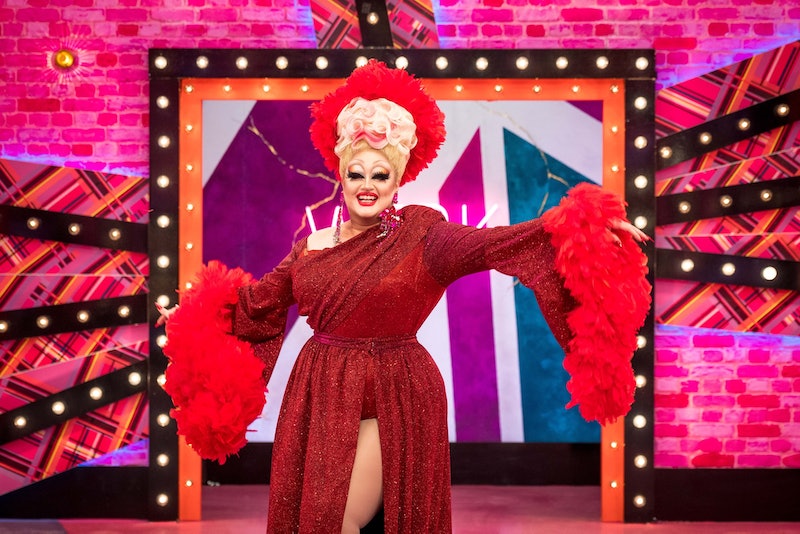 Born in Portsmouth and based in Cardiff, Victoria is already off to a major start, winning fans over with her glamorous burgundy gown, feathered sleeves, thigh-high split, coiffed curls and her fierce opening line – “Hell hath no fury like a woman sconned.” But what else is there to know about the AFAB Queen? Here’s the lowdown.

Born in Pompey, and now based in Wales, Victoria Scone is 28 years old, per RadioTimes. But her inspiration comes from “Older Welsh queens,” she says, citing the legendary Ceri Dupree.

“I like to mix my traditional drag with fashion and blur the lines between panto, fashion and costume,” she told the BBC. “If you come to a Victoria Scone show, you’re going to get all the divas,” she added. “A bit of Barbara, a bit of Donna Summer. My drag is high camp and utter nonsense. I am not portraying a real woman. Victoria is a caricature of a real woman.”

"As queer people, we are oppressed and marginalised, so why would we continue to do that within our own community? People often don't even consider the fact that I – as a woman in drag – could be a queer woman. There are just not enough queer women in the public eye, in my opinion, so I'm here to be 'celesbian' - a celebrity lesbian!" she told BBC THree.

"I genuinely think I was born to be a drag queen,” Victoria said in an interview, “but I didn't really know if, as a woman, that was a possibility for me." Sharing her art work via Instagram, Victoria Scone can be found on @victoriascone and on Twitter on @victoriascone.

Everything Else You Should Know About Victoria Scone

Per BBC Three, while Victoria does occasionally use the term AFAB – an acronym used in the drag community to refer to performers who were assigned female at birth – she says she prefers to be called a drag queen. Though, she adds, she "understands it's important in conversations to be inclusive."

Speaking to WalesOnline, Victoria spoke about being surprised by the level of support she had received from the public when she was announced to be joining the cast of season 3. "I prepared myself for the worst public reaction but I received such a overwhelmingly positive response," she said.

Revered judge Michelle Visage noted in an interview with Gay Times that this “It’s the first cis female competitor, although I have been there for many years! I try to win in every country, every series, and it just happened yet.”

More like this
Joey Essex Is Rumoured To Be Dating A 'Love Island' Favourite
By Sam Ramsden
Barney Walsh Has Been Linked With This Famous Miss World Winner
By Sophie McEvoy
'The Traitors' Is Officially Being Turned Into A Board Game
By El Hunt
'Love Island' Has Added Yet Another Bombshell To The Villa
By Bustle UK
Get The Very Best Of Bustle/UK
Sign up for Bustle UK's twice-weekly newsletter, featuring the latest must-watch TV, moving personal stories, and expert advice on the hottest viral buys.