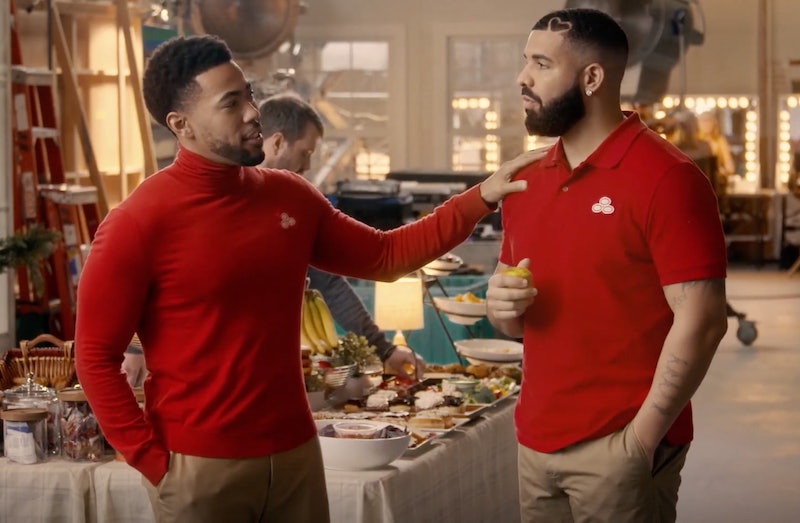 It's hard to believe, but State Farm has never run a commercial during the Super Bowl. This year the insurance company has produced its first, and it featured some major stars including rapper Drake as the on-set stand-in for the iconic Jake from State Farm.

The clip takes place on a faux commercial set within the actual commercial, opening with State Farm's regularly appearing cheese-hat-wearing sports super fan declaring that he'll be standing in for the Green Bay Packers' Aaron Rodgers in a new ad. Asking why he couldn't get a stand-in who better resembles him, Kansas City Chiefs player Patrick Mahomes points out that his double isn't much better as the camera cuts to Paul Rudd, dressed exactly like the NFL player as he badly fumbles a football throw. Longtime State Farm ad frontman Jake then wonders where his stand-in is before Rodgers spots the "Toosie Slide" rapper dressed in the starring insurance rep's signature red polo and khakis. "Hold on, is that Drake?" asks Rodgers.

"That's right. Drake from State Farm," says the rapper before attempting to recite Jake's classic tagline, "Like a good neighbor, State Farm is there." Jake repeatedly cuts him off before telling him that "stand-ins don't have lines."

Drake and Jake's pairing is so perfect that it has us wondering what took so long for this ad to happen. State Farm's commercials have become synonymous with sporting events, but the company has actually never run an ad during the Super Bowl before. Last year, however, it did run an ad in the final pre-game time slot, a choice detailed in a recent interview with State Farm's executive vice president and chief agency, sales and marketing officer Rand Herbert. “As you can imagine, the costs are way less. It's just really hard to obtain that time because everyone wants it," Herbert said. "It was really perfect. Just think: How many eyeballs are on TV sets ready for the kickoff?”

This time around State Farm landed the real deal, and while Herbert refused to disclose how much the ad cost, CBS has revealed that rates for a 30-second ad airing during Super Bowl LV start at $5.5 million. The commercial immediately went viral online, proving that the price was likely well worth it. "Drake from State Farm really won this night for me," wrote one Twitter user. Others pointed out the significance of a Drake commercial airing before The Weeknd's halftime performance, considering that the rapper helped elevate the R&B/pop singer's profile early on in his career.

More like this
Twitter Is Freaking Out Over Rihanna’s 2023 Super Bowl Halftime Show Announcement
By Stephanie Topacio Long
Everything To Know About Taylor Swift’s 10th Studio Album, 'Midnights'
By Grace Wehniainen and Jake Viswanath
Jason Derulo Is Launching A New Singing Show In The UK
By Maxine Harrison
Kanye West Apologizes To Kim K "For Any Stress I Have Caused" In Rare Interview
By Jake Viswanath
Get Even More From Bustle — Sign Up For The Newsletter