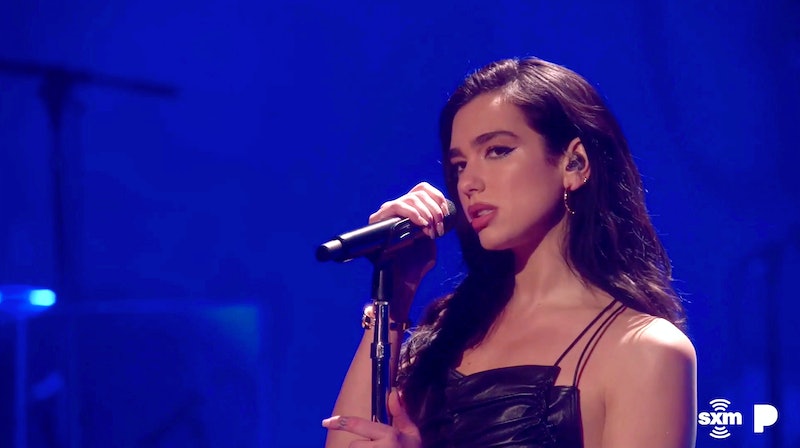 The New York Times documentary Framing Britney Spears has sparked long-needed conservations about how the media treats women, especially in a tabloid-dominated, pre-social media landscape, and now everyone has something to say about it. Grammy-winning artist Dua Lipa said she relates to Britney Spears' paparazzi moments, even if she hasn't gotten them as intensely as the legendary singer, thanks to the power of Instagram.

After watching Framing Britney Spears, Lipa said in a new Los Angeles Times interview that she agreed Spears was being "harassed" by paparazzi, leading to her headline-dominating 2007 breakdown. "The feeling of going down the street and they’re trying to catch you in this very awkward picture — it can be anxiety-inducing, honestly," she said. "Britney's time was pre-Instagram when everything was purely about the tabloids, and there were no laws in place about what paparazzi were allowed to do. She was being harassed — that’s exactly what it was."

One of the aspects the documentary focuses most on, aside from Spears' controversial conservatorship, is the paparazzi's relationship with Spears, outlining how photographers' intense hounding led to some of the singer's most documented public moments in 2007, including the infamous head-shaving incident and the time she bashed a paparazzo's car with an umbrella. One of the photographers defended their relationship with Spears in the documentary, arguing that they didn't affect her mentally. “There were times when she said leave me alone for the day," he said. "But it wasn’t like leave me alone forever."

Most celebrity photographers have made it clear that they have no regrets about how they treated Spears or other highly scrutinized female stars during that time. In an interview with Insider, Hollywood photographer Rick Mendoza said that business is business: "I'm in it for the money and the history. You think I give a f*ck about somebody getting up on the wrong side of the bed, and they don't want their photograph taken? I don't give a sh*t." Thankfully, as Lipa pointed out, the paparazzi has less control over a celebrity's image today because of platforms like Instagram, where stars can easily share content themselves.

While Lipa acknowledged that paparazzi photos, like "you looking nuts after you’ve just woken up trying to get to the gym,” can still go viral in 2021, the "Hallucinate" singer has made a conscious effort to keep much of her life private and out of the press, which even extends to her craft. "I've grown to be more private because so much of my life is public, and I probably censor myself more than I used to," she said. "I also don't love the idea of making music for headlines or for controversy."