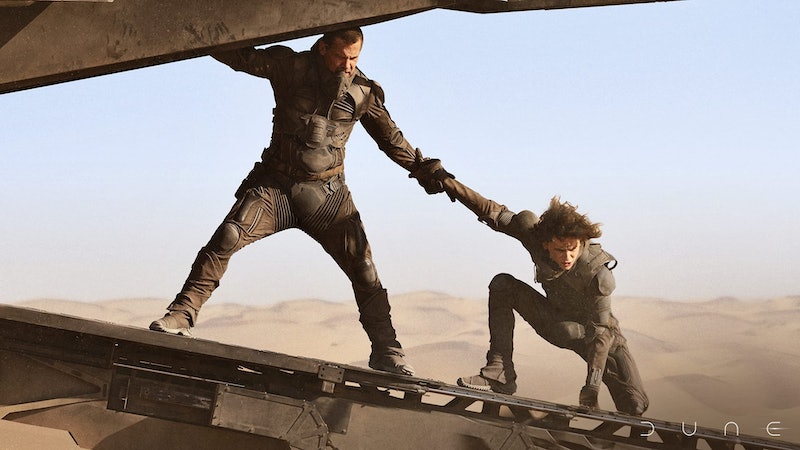 If you’ve seen Denis Villeneuve’s Dune, you may be confused about that anti-climactic ending. Those who have read Frank Herbert’s epic novel of the same name know that there’s much more to the story — as Chani (Zendaya) says at the film’s close, “This is just the beginning.” Luckily, fans will soon get to see the rest, as Dune: Part Two is now officially in the works. (Warning: major Dune spoilers below.)

Dune: Part One only covers the first half of the book, and it spends a lot of time laying the ground for events to come. Timothée Chalamet leads the film as Paul Atreides, the ducal heir to House Atreides, as he and his parents (played by Rebecca Ferguson and Oscar Isaac) inherit the desert planet of Arrakis. However, the seemingly peaceful transition of power is soon revealed to be a ruse, and the malevolent House Harkonnen arrives to take back the planet. Paul’s father, along with many of his allies, is killed; Paul and his mother flee to the desert to join the Fremen, Arrakis’ indigenous people. Dune ends just as the Fremen agree to take them in — leaving the novel’s action-packed second half entirely untouched.

Famously, Villeneuve only agreed to direct the film if he could split the novel into two parts. “I would not agree to make this adaptation of the book with one single movie,” Villeneuve told Vanity Fair last year. “The world is too complex. It’s a world that takes its power in details.”

So when can fans expect to see Dune: Part Two on the big screen? Below, everything to know about the upcoming Dune sequel, including which actors are likely to join the Hollywood blockbuster.

It’ll be a while before Dune: Part Two hits the big screen.

Less than a week after Dune: Part One premiered, Legendary Entertainment confirmed that a sequel was officially in the works. “This is only the beginning ...” the company wrote on Twitter. “Thank you to those who have experienced @dunemovie so far, and those who are going in the days and weeks ahead. We're excited to continue the journey!”

Villeneuve was working on a script before the sequel was even confirmed.

Confident that the studio would agree to make a second installment, Villeneuve started working on the script for Dune: Part Two well before it had officially been greenlit.

"I’m writing [Part Two] now, and I feel like I’m eight years old again,” Villeneuve told Total Film in August 2021, adding, “It’s the first time I’ve experienced it where I’m watching one of my movies, and I have a moment of deep gratitude, of deep joy, and I say, ‘Thank you, life, for having allowed me to bring that to the screen.’”

In all likelihood, Dune: Part Two will stay close to its source material.

Not much is known about what Villeneuve has planned for the sequel, but as his first film was faithful to its source material, it’s highly likely that Dune: Part Two would also closely trace the events of Herbert’s novel — meaning that fans will get to see Paul’s romance with Chani, the birth of Paul’s sister, Alia, and Paul’s final showdown with House Harkonnen.

Dune: Part Two Already Has Some Heavyweights In Talks To Join The Cast

On March 8, Deadline reported that Chalamet’s Little Women co-star Florence Pugh was in negotiations to join the project as Princess Irulan Corrino, the daughter of Emperor Shaddam Corrino IV. The princess plays a pretty significant role in the novel, especially since she eventually weds Paul, not knowing that he’s in love with Chani. With Pugh’s casting finally pushing through, Dune: Part Two will mark the second time she and Chalamet play spouses. Christopher Walken is joining the cast as Pugh’s onscreen dad, Emperor Shaddam IV.

Another potential new cast member was announced two days later. On March 10, Deadline reported that Austin Butler was in talks to be part of the film and he confirmed. The Elvis star will supposedly take on the role of Feyd-Rautha, the cunning nephew of Baron Vladimir Harkonnen, who eventually faces off with Paul.

On June 23, The French Dispatch star Léa Seydoux rounded out the cast. Per Deadline, she’ll be playing Lady Margot, a long-standing servant of the Sisterhood.