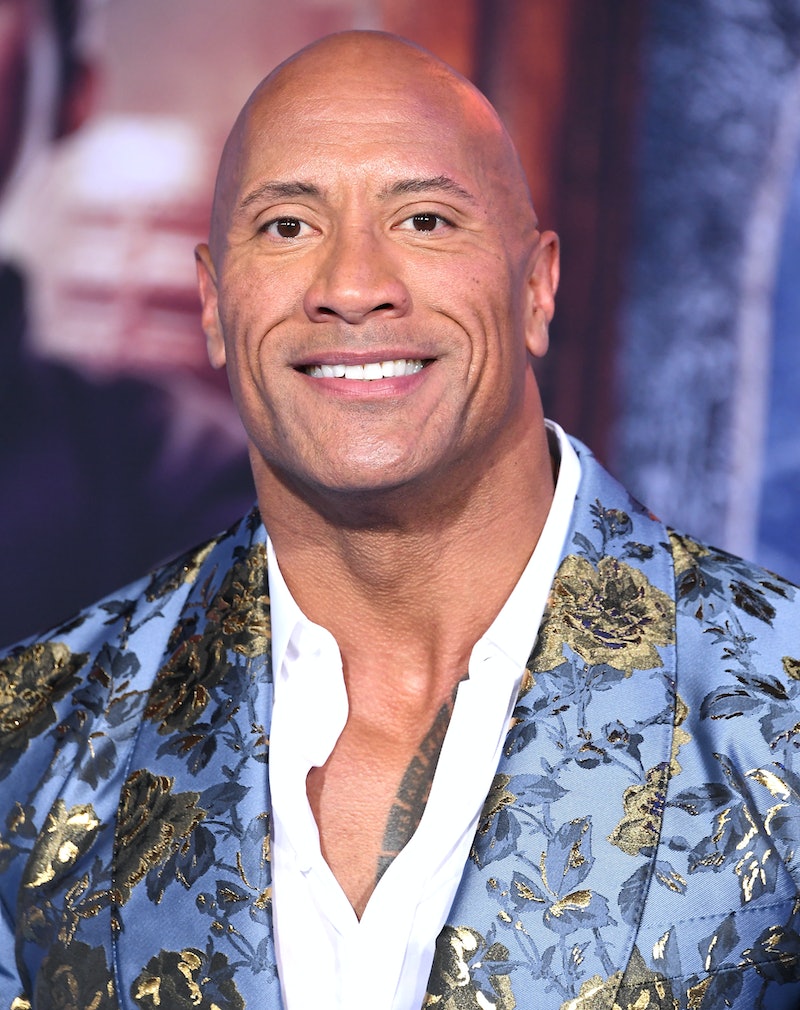 There's nothing like your own children to keep you humble. Dwayne Johnson's "You're Welcome" from Moana went 4x platinum, and to commemorate the music milestone, the actor revealed his daughter still doesn't realize he sings the iconic track. On Saturday, Johnson shared a screenshot of an article confirming the quadruple-platinum status of "You're Welcome" on Instagram, alongside a video of him singing the song to his 2-year-old daughter, Tiana.

"I usually have a cool and calm demeanor when I hear good news, but admittedly when I heard this I said, “HOLY SH*T MY SONG WENT QUADRUPLE F*CKING PLATINUM??" Johnson wrote in the caption. The Moana star went on to thank Lin-Manuel Miranda for writing the track, as well as fans around the world who, "who love the song and the swaggy, fun it brings." The father of three also gave "a huge daddy thank you to the real reason this song is 4Xs Platinum and growing - my 2-year-old boss, Baby Tia who LOVES hearing me sing this song to her."

Johnson added that while his daughter requests the song often, she has "no idea I’m actually, Maui - which kinda makes this whole thing that much more awesome." This year, Johnson has posted frequent social media updates on a running bit in his family, sharing videos singing "You're Welcome" to Tiana and then asking her if he's Maui. Tiana — who always says no — has yet to realize her dad is indeed Maui, even as she's helped bring the Disney track to an even bigger audience.

"You're Welcome" was released as a single in 2016 after the Moana premiere, and was awarded gold status by the RIAA in April 2017, as People reported. But Johnson's videos with Tiana on Instagram are part of the track's enduring popularity. It's been quite the saga: In April 2020, Johnson shared a video teaching Tiana to wash her hands amid the COVID-19 pandemic, having her scrub along to the song's rap section. He wrote: "Baby Tia (mama mia) demands I sing the rap portion of my song 'You’re Welcome' from MOANA, while I wash her hands." Later that month, the Fast and Furious star sang to Tiana again, captioning the Instagram video, "And for the 937th time today she wants daddy to sing along with Maui. She has no idea, we’re the same person."

In May, Tiana requested Johnson sing the hit one more time for Instagram, with the actor asking at the end: "Is daddy Maui?" His daughter replied, "No." Then, in August, the Rock tried to tell Tiana he's Maui yet again, but his daughter still wasn't convinced. It seems Johnson may only have to sing "You're Welcome" a thousand more times before she's swayed.

More like this
There's A Taylor Swift Easter Egg In Ryan Reynolds' 'Deadpool 3' Teaser
By Marina Watts
Everything You Need To Know About ‘Black Panther: Wakanda Forever’
By Bustle Editors
How Ghosts Inspired Kesha’s New Music
By Jake Viswanath
Everything To Know About Taylor Swift’s 10th Studio Album, 'Midnights'
By Grace Wehniainen and Jake Viswanath
Get Even More From Bustle — Sign Up For The Newsletter