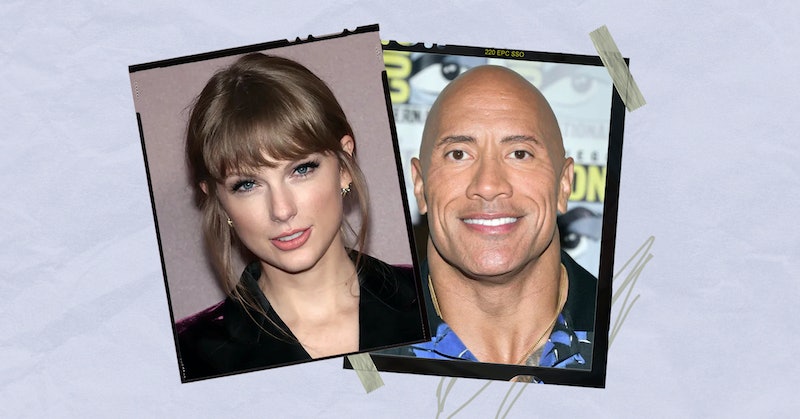 Taylor Swift doesn’t have any “bad blood” with Dwayne “The Rock” Johnson. On July 30, the actor and his co-star Kevin Hart revealed in a TikTok video that the singer’s latest “Taylor’s Version” re-recording, “Bad Blood (Taylor’s Version),” was featured in their new movie DC League of Super-Pets. The animated superhero film also includes Swift’s “Message in a Bottle,” one of her formerly unreleased “From the Vault” tracks on Red (Taylor’s Version), which was released in November 2021.

The TikTok video starts with Johnson rocking out to “Bad Blood (Taylor’s Version)” and telling his co-star how much he loves the song, but Hart is jamming to “Message in a Bottle” with headphones on and completely misunderstands him. “Go to the doctor,” he tells The Rock. “Your blood's not as bad as you think it is.” When Johnson tries to clarify his sentiment, praising Swift’s cutting lyrics, it only confuses Hart more. “Are you dying?” he asks, before telling him not to bring Swift into his situation. Then, a superimposed image of Swift appears and starts whispering in The Rock’s ear, asking, “Is there still time to cut Kevin out of the movie?”

Swift herself commented on the TikTok video and praised Johnson for his undying support. “Leave it to my friend Dwayne to support the ethically sourced versions of my songs,” she wrote. “Good luck with the film! Ur the man.”

Although fans are still awaiting a release date for 1989 (Taylor’s Version), it makes sense that Swift keeps teasing the album by lending her “Taylor’s Version” recordings to new films. In 2019, Swift explained that one of her reasons for re-recording her first six studio albums is her desire to have her music featured in other mediums without benefitting Scooter Braun, who acquired the masters of those albums as part of a deal to buy her former label Big Machine Records, which she publicly disapproved of. “I do want my music to live on,” she told Billboard in 2019. “I do want it to be in movies, I do want it to be in commercials. But I only want that if I own it.”

More like this
There's A Taylor Swift Easter Egg In Ryan Reynolds' 'Deadpool 3' Teaser
By Marina Watts
Everything To Know About Taylor Swift’s 10th Studio Album, 'Midnights'
By Grace Wehniainen and Jake Viswanath
Lizzo Twerks While Playing James Madison's 200-Year-Old Crystal Flute Onstage
By Radhika Menon
Twitter Is Freaking Out Over Rihanna’s 2023 Super Bowl Halftime Show Announcement
By Stephanie Topacio Long
Get Even More From Bustle — Sign Up For The Newsletter