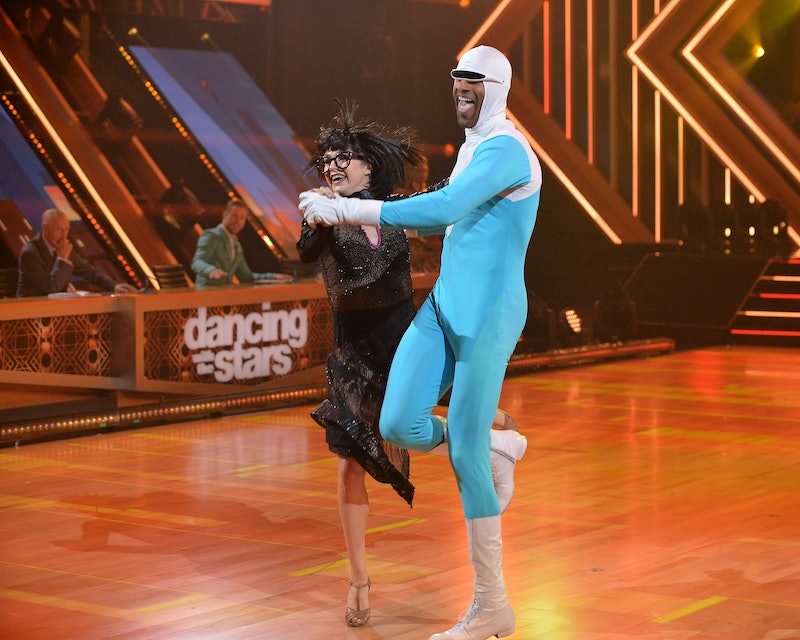 The rumors are true: Matt James finally dressed up as his celebrity doppelgänger. The reality star cosplayed as Frozone from The Incredibles for Disney Heroes Night on Dancing With the Stars Season 30 on Oct. 11 — a character that fans had frequently compared him to when he handed out roses on Season 25 of The Bachelor. His partner Lindsay Arnold stepped out onto the dance floor dressed as Edna Mode, the popular fashion designer who styled the world’s bravest superheroes in the 2004 animated movie and its 2018 sequel.

“I found my supersuit,” James wrote on Instagram after their quickstep to “The Incredits,” the credit music from the Pixar classic. And although their dance earned them a cool 26 out of 40, fans on social media thought that the duo’s costumes should’ve earned them some extra style points. One fan wrote that James “understood the assignment,” and another said that they were glad he got to live out his “Frozone dreams.” Even his best friend Tyler Cameron loved it. “This is the energy,” the former Bachelorette contestant commented. The comments on Instagram were nothing compared to the memes and tweets viewers shared on Twitter as the show was airing.

Some Twitter users were grateful that the former Bachelor decided to wear a shirt (er, bodysuit) while others commended Arnold for making Edna Mode look hot.

The Incredibles performance isn’t the only one from Disney Heroes Week that DWTS fans can’t stop talking about. JoJo Siwa and her dance partner Jenna Johnson stunned viewers with a Viennese waltz to Cinderella’s “A Dream Is A Wish Your Heart Makes.” Their routine earned them the first 9s of the season, resulting in a total score of 35 out of 40.

While every week is a challenge, Olympian Suni Lee and her dance partner Pasha had the added pressure of dancing to a song from a movie that hasn’t been released yet. The duo performed a salsa to the song “Colombia, Mi Encanto” from the upcoming film Encanto. Len Goodman called it Suni’s “most expressive” performance yet, and the pair walked away with a score of 33 out of 40.

It’s worth noting that this was just the first of two Disney nights. On Oct. 12, the contestants will hit the dancefloor again, but this time as villains instead of heroes. At this point, it’s still a mystery which pair will get the boot. However, what we do know is that Brian Austin Green and partner Sharna Burgess have a lot to prove after earning the lowest score of the evening — a 25 out of 40 — for their waltz to “Someday My Prince Will Come” from Snow White and the Seven Dwarfs.