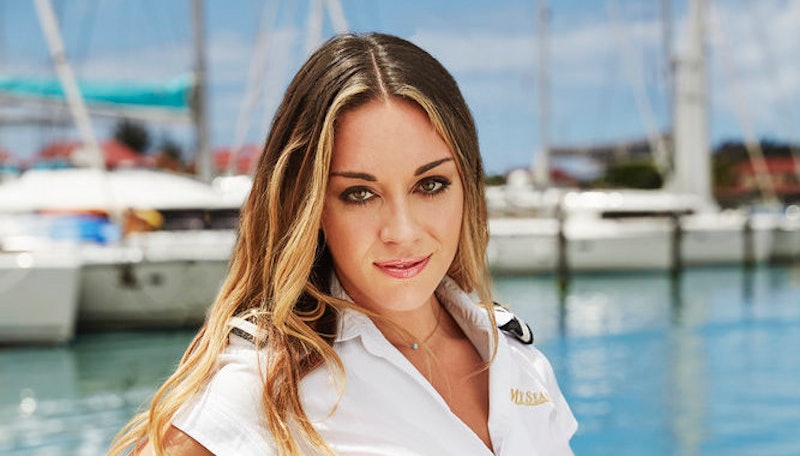 Among the whopping six new crew members aboard My Seanna in Below Deck Season 8 is steward Elizabeth Frankini, who comes to the show after four years of on-and-off freelance yachting. According to her Bravo bio, she was introduced to the industry by an ex-boyfriend and considers herself a "mermaid at heart." She's also big into astrology and crystals, describing herself as someone who's "always marching to the beat of her own drum."

Here's what you need to know about the Long Island native.

Elizabeth's Job Outside Of Below Deck

When she's not yachting around the world, Elizabeth is trying to break into the acting industry. According to her IMDb page, she previously starred in the 2014 film Behind Closed Doors. It was a Best Picture nominee at the Winter Film Awards Independent Film Festival that year. She also revealed on Instagram last September that she's been cast in a short film called They Prefer Richards. She's hoping her time on My Seanna will help her hone her craft. "I feel like deep down maybe to become a better actress, I needed more life experience," she told Newsday.

The reality star takes her love of the ocean sea-riously (sorry!!), with may of her Instagram photos showing her hanging out on the beach, swimming, or chilling on boats.

She's also big on selfies with inspirational quote captions about nature. For example, she captioned the below photo from April, "I am water. Only the moon rules my life. I allow healing and grace to calm me." She tagged the post on "Planet Earth," which could not scream hippie energy any louder.

Let's see if she can maintain her calm amid the drama on Below Deck.

More like this
Where Is Armie Hammer’s Ex-Wife Elizabeth Chambers Now After 'House Of Hammer'?
By Grace Wehniainen and Radhika Menon
Kourtney Kardashian Claps Back At Pregnancy Speculation On Instagram
By Jake Viswanath
Jason Derulo Is Launching A New Singing Show In The UK
By Maxine Harrison
The 'Bachelor In Paradise' Schedule Shifts To 4 Hours Every Week After The Season 8 Premiere
By Brad Witter
Get Even More From Bustle — Sign Up For The Newsletter