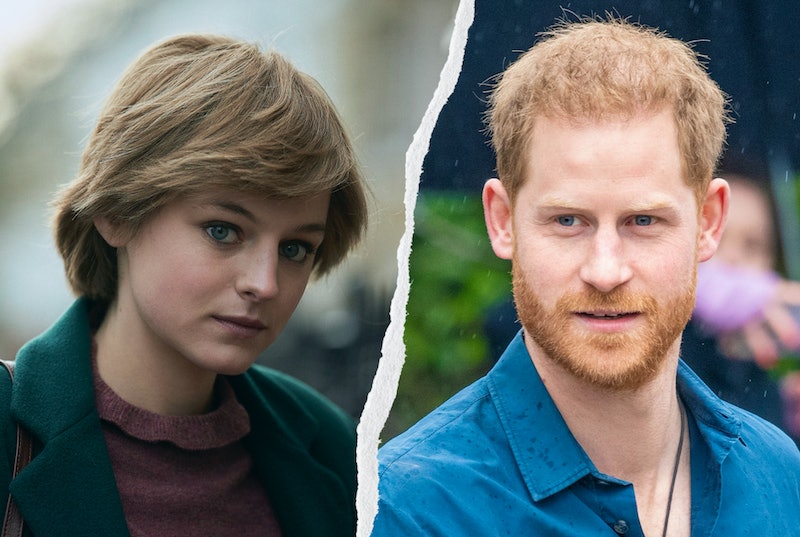 The Crown was, unsurprisingly, a sweeping success at the 2021 Golden Globes. The show itself won best drama TV series and three of its cast members — Josh O'Connor, Gillian Anderson, and Emma Corrin — walked away with awards for their performances. Fans and politicians have speculated on the historical accuracy of The Crown over the last few months and even Prince Harry shared his opinion while appearing on a chat show last week. Now Emma Corrin and Gillian Anderson have responded to Harry’s comments about The Crown.

Speaking to James Corden for The Late Late Show, Harry shed some light on what he thinks about the hit series. The fourth season took Netflix by storm, portraying the beginning of Prince Charles and Princess Diana’s relationship as well as Margaret Thatcher’s rise to power.

Speaking about the accuracy of the show, Prince Harry said, “They don’t pretend to be news. It’s fictional, but it’s loosely based on the truth. Of course it’s not strictly accurate, but loosely… it gives you a rough idea about that lifestyle, what the pressures of putting duty and service above family and everything else, what can come from that.”

He added, “I’m way more comfortable with The Crown than I am seeing the stories written about my family or my wife or myself. Because it’s the difference between, ‘That is obviously fiction, take it how you will,’ but this is being reported on as fact because you’re supposedly news. I have a real issue with that.”

Now it's been reported that, after hearing the prince's comments, Emma Corrin, who plays Princess Diana, told reporters at a virtual backstage session, “I was very moved by the fact that he acknowledged it. I’m incredibly grateful to him and incredibly moved by what he said.”

Gillian Anderson added, “Harry is fairly well qualified to judge what is fact or fiction. He’s understood what [creator] Peter [Morgan] is trying to do on The Crown.” She won best supporting actress in a TV series at the Golden Globes.

A few months ago, another royal shared their thoughts on the popular Netflix series. In January, Sarah Ferguson, Duchess of York, told Us Weekly, “I thought it was filmed beautifully. The cinematography was excellent. I loved the way they put my wedding in as well.”