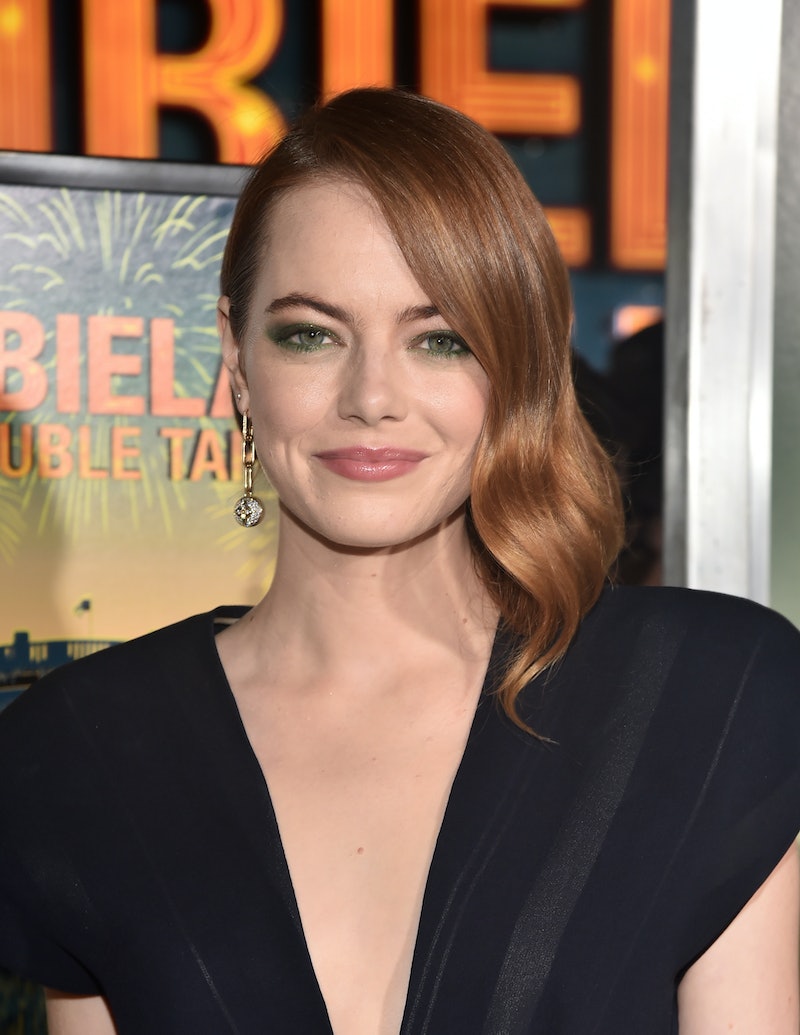 Spring is here, and so is Emma Stone’s first child, apparently. According to TMZ, the La La Land star and her husband Dave McCary are officially parents. As reported on Friday, March 26, the actor reportedly gave birth in the Los Angeles area on March 13, but much like Stone’s entire pregnancy, details about the baby are being kept tightly under wraps. Bustle has reached out to Stone’s rep for comment and will update this story accordingly.

While the baby’s sex was initially a mystery, PEOPLE reported on March 29 that Stone and McCary welcomed a baby girl. However, per TMZ, the baby’s name is still being kept secret for now. What we do know, however, is that the couple has long been looking forward to the arrival of their first child. “She seems very happy and very excited about becoming a mother — she’s constantly oohing and cooing,” a source told Us Weekly in Jan. 2021 when it was first reported that Stone was expecting. “She looks great, she looks healthy, she's glowing.”

“She’s been keeping up with friends and work lately, she’s always staying active and gets her daily exercise in,” the insider continued. Daily Mail seeming confirmed this to be true in their initial report of The Amazing Spider-Man star’s pregnancy when they shared photos of the star cradling her baby bump while on a walk with a friend in Los Angeles in December of last year.

The news that the couple was expecting their first child together came shortly after they reportedly tied the knot in Sept. 2020. They first announced their engagement with a selfie on McCary's Instagram in Dec. 2019. In the photo, the newly engaged couple smiled and showed off the actor's new diamond ring. Per Us Weekly, their engagement came roughly two years after Stone started dating the Saturday Night Live writer in Oct. 2017.

Stone hasn't been shy about her desire to expand her family in recent years. While promoting her animated movie The Croods: A New Age with ET Online in Nov. 2020, she revealed that she'd love to start a “pack” of her own. In conversation with Jennifer Lawrence for Elle in 2018, she said that her “perspective about kids has changed” as she’s gotten older. “I never babysat or anything,” she said. “As a teenager, I was, like, ‘I’m never getting married, I’m never having kids.’ And then I got older and I was, like, ‘I really want to get married, I really want to have kids.’”

Getting older seemingly changed everything for the Oscar winner. “It's the turning 30 thing where you're, like, ‘I’m not that young. I’m young, but I’m not that young,’” she told Lawrence. Prior to dating and ultimately marrying McCary, the Easy A star was in a long-term relationship with her Spider-Man co-star Andrew Garfield from 2010 to 2015. To this day, there are Marvel fans that are hoping the former flames will end up together, but now that Stone and her husband have officially brought new life into the world, we can say with absolute certainty that it’s time to move on.

More like this
Who Is Nick Cannon Dating & How Many Kids Does He Have?
By Jordyn Tilchen and Radhika Menon
How To Apply For 'Survivor' & Tips On How To Get Cast
By Meg Walters
Here’s Everything You Need To Know About Operation London Bridge
By Bustle UK
10 Photos Of William, Harry, & Their Cousins Honoring The Queen Together
By Stephanie Topacio Long
Get Even More From Bustle — Sign Up For The Newsletter