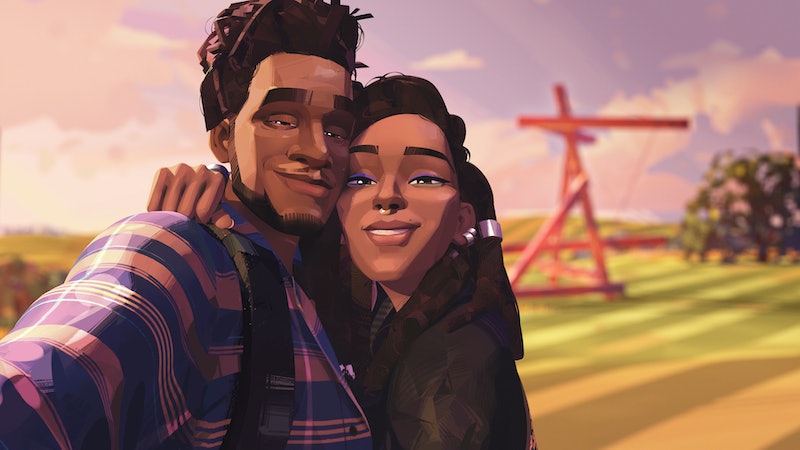 Kid Cudi, aka Scott Mescudi, is ditching his usual melodic hums for animated television. Entergalactic, the rapper’s latest project, just landed on Netflix on Sept. 30, and the series follows New York artist Jabari (Mescudi) as he attempts to balance love and ambition. It’s a fairly straightforward premise that sees Jabari fall in love with the eclectic photographer Meadow (Jessica Williams), and the couple’s relationship flourishes through art, music, fashion, and expression. For all the visual spectacle on display in Season 1, can Cudi get Entergalactic to Season 2?

Netflix has yet to greenlight a second season, meaning that Netflix may be waiting to make a decision on the show’s future based on critical and audience receptions. Mescudi told Collider that Entergalactic is meant to fill a “void” in the entertainment industry with regard to the lack of Black love stories. “We don’t see it a lot,” he said of the relationship between Meadow and Jabari. The show’s co-creator, Kenya Barris, is also no stranger to these filling voids. Barris is the mind behind Black-ish, which platformed Black stories and characters across its eight seasons on ABC.

With Entergalactic making waves in more ways than one, here’s what we know so far about its potential second season.

The animated series boasts one of the more high-profile voice casts you’ll find on television. Besides Mescudi and Williams, the roster includes Timothée Chalamet, Laura Harrier (Spider-Man: Homecoming), Arturo Castro (Broad City), Christopher Abbott (Girls), Keith David (Nope), Vanessa Hudgens, and Macaulay Culkin. There are some more musicians in the mix as well, including Jaden Smith, Teyana Taylor, and Ty Dolla $ign. Such an impressive cast may sway Netflix into renewing Entergalactic for a new season based on star-power alone. However, with that many big names, it may be hard to wrangle all of their busy schedules for a second season.

Without an official renewal, it’s hard to predict when Season 2 will premiere. To make matters more complicated, the debut of Entergalactic serves as a very uncommon double feature. When the show dropped on Sept. 30, so did Kid Cudi’s 10th studio album of the same name. “There's never been an album and a series dropped at the same time,” Barris told Complex. “Each song will have a 30-minute narrative that kind of explains what that song is about, and it's a love story." It’s an incredibly ambitious form of storytelling and one that may delay a Season 2. If Mescudi plans on making another album to coincide with the release of a new season of Entergalactic, it may take a while before either sees the light of day. An undertaking like that would take upwards of a year, so don’t expect a potential second season until at least September 2023 or later.

This article will be updated as more information about Entergalactic Season 2 becomes available.